“Casting down imaginations and every high thing that exalteth itself against the knowledge of God.” 2 Corinthians 10:5

Deliverance from sin is not deliverance from human nature. There are things in human nature, such as prejudices, which the saint has to destroy by neglect; and other things which have to be destroyed by violence, i.e., by the Divine strength imparted by God's Spirit. There are some things over which we are not to fight, but to stand still in and see the salvation of God; but every theory or conception which erects itself as a rampart against the knowledge of God is to be determinedly demolished by drawing on God's power, not by fleshly endeavour or compromise (2Cor 10.4).

it is only when God has altered our disposition and we have entered into the experience of sanctification that the fight begins. The warfare is not against sin; we can never fight against sin: Jesus Christ deals with sin in Redemption. The conflict is along the line of turning our natural life into a spiritual life, and this is never done easily, nor does God intend it to he done easily. It is done only by a series of moral choices. God does not make us holy in the sense of character; He makes us holy in the sense of innocence, and we have to turn that innocence into holy character by a series of moral choices. These choices are continually in antagonism to the entrenchments of our natural life, the things which erect themselves as ramparts against the knowledge of God. We can either go back and make ourselves of no account in the Kingdom of God, or we can determinedly demolish these things and let Jesus bring another son to glory. 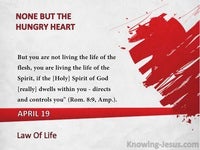 Law Of Life
Is It Not In The Least Likely?
Faith and God’s Grace - Growing In Grace (11)
A Telling Testimony