“I have finished the work which Thou gavest Me to do.” John 17:4

The Death of Jesus Christ is the performance in history of the very Mind of God. There is no room for looking on Jesus Christ as a martyr; His death was not something that happened to Him which might have been prevented: His death was the very reason why He came.

Never build your preaching of forgiveness on the fact that God is our Father and He will forgive us because He loves us. It is untrue to Jesus Christ's revelation of God; it makes the Cross unnecessary, and the Redemption "much ado about nothing." If God does forgive sin, it is because of the Death of Christ. God could forgive men in no other way than by the death of His Son, and Jesus is exalted to be Saviour because of His death. "We see Jesus because of the suffering of death, crowned with glory and honour." The greatest note of triumph that ever sounded in the ears of the startled universe was that sounded on the Cross of Christ - "It is finished." That is the last word in the Redemption of man.

Anything that belittles or obliterates the holiness of God by a false view of the love of God, is untrue to the revelation of God given by Jesus Christ. Never allow the thought that Jesus Christ stands with us against God out of pity and compassion; that He became a curse for us out of sympathy with us. Jesus Christ became a curse for us by the Divine decree. Our portion of realizing the terrific meaning of the curse is conviction of sin, the gift of shame and penitence is given us - this is the great mercy of God. Jesus Christ hates the wrong in man, and Calvary is the estimate of His hatred. 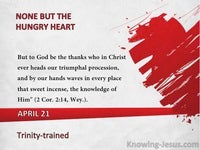