“He hath made Him to be sin for us … that we might be made the righteousness of God…” 2 Corinthians 5:21

The modern view of the death of Jesus is that He died for our sins out of sympathy. The New Testament view is that He bore our sin not by sympathy, but by identification. He was made to be sin. Our sins are removed because of the death of Jesus, and the explanation of His death is His obedience to His Father, not His sympathy with us. We are acceptable with God not because we have obeyed, or because we have promised to give up things, but because of the death of Christ, and in no other way. We say that Jesus Christ came to reveal the Fatherhood of God, the loving-kind ness of God; the New Testament says He came to bear away the sin of the world. The revelation of His Father is to those to whom He has been introduced as Saviour. Jesus Christ never spoke of Himself to the world as one Who revealed the Father, but as a stumbling block (see John 15:22-24 ). John 14:9 was spoken to His disciples. 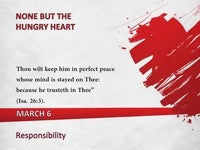 Responsibility
Amid A Crowd Of Paltry Things
God, My Purity (Study In God - All I Need-21)
A Secure Home