“But have renounced the hidden things of dishonesty.” 2 Corinthians 4:2

Have you "renounced the hidden things of dishonesty" - the things that your sense of honour will not allow to come to the light? You can easily hide them. Is there a thought in your heart about anyone which you would not like to be dragged into the light? Renounce it as soon as it springs up; renounce the whole thing until there is no hidden thing of dishonesty or craftiness about you. Envy, jealousy, strife - these things arise not necessarily from the disposition of sin, but from the make - up of your body which was used for this kind of thing in days gone by (see Romans 6:19 and 1 Peter 4:1-2). Maintain a continual watchfulness so that nothing of which you would be ashamed arises in your life.

"Not walking in craftiness," that is, resorting to what will carry your point. This is a great snare. You know that God will only let you work in one way, then be careful never to catch people the other way; God's blight will be upon you if you do. Others are doing things which to you would be walking in craftiness, but it may not he so with them: God has given you another standpoint. Never blunt the sense of your Utmost for His Highest. For you to do a certain thing would mean the incoming of craftiness for an end other than the highest, and the blunting of the motive God has given you. Many have gone back because they are afraid of looking at things from God's standpoint. The great crisis comes spiritually when a man has to emerge a bit farther on than the creed he has accepted. 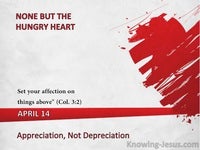 Appreciation, Not Depreciation
Inspired Invincibility
Song of the Christian
The Baby Metaphor Growing In Grace (6)