The short simple phrase 'In Christ[ has become the essence of the book of Ephesians. These two little words 'In Christ' have an enormous weight of meaning. God has given the believer an immeasurable wealth of riches in the Lord Jesus. God has blessed believers with every spiritual blessing in the heavenlies – 'In Christ'. All I am and have and will be eternally is deposited in Christ, for me – and for you. All Christ’s church is, and has, and hopes for, and will be is eternally secured in Him.

Riches of His Grace

This tiny preposition proclaims immense significance when linked with Jesus Christ – 'IN' Christ Jesus,; 'IN' the Lord Jesus; 'IN' Him; 'IN' Whom. This insignificant word has everlasting consequences in our relationship with Christ.. for we are identified with all He has and is and has done – and are established in Him. To meditate on this truth for a lifetime would scarcely probe its eternal significance.

Time and again Paul reminds us of the truth that we are IN Him and OF Him. He reminds us that it is Christ in Whom and of Whom and by Whom are all things, and we’re identified with Him – positioned in Him, in eternal union with Him. In Christ, we have everything yet without Christ we have and are nothing.

Before we were made alive, by grace in Christ, we were dead in our sins by nature – but since rebirth, we are positioned in Him, and it is all by grace through faith. In Christ, we’re quickened, raised, seated, and identified with our heavenly Lord.

He lived and died in union and communion with His heavenly Father. He spent His life sharing the divine viewpoint and acting on divine promptings.  And while we are on earth, we are to do only those things that the Spirit does.

We are to share in His divine viewpoint and act only on His divine promptings. We are to heed the Spirit’s voice,  joyfully submitting to His heavenly guidance, for we are positioned in Christ - identified with Him - one with His will.

His will is to be our will for He is to be our meat and drink – our joy and delight. The short simple phrase 'In Christ' has become the essence of the book of Ephesians; The two little words 'In Christ' have an enormous weight of meaning.

Throughout His letters, Paul gradually unfolds the riches of His grace towards us, and because we are blessed by God, we can in turn be a blessing to Him – so we can say with Paul, BLESSED be the God and Father of our Lord Jesus Christ, BLESSED be our God forever and ever, AMEN. 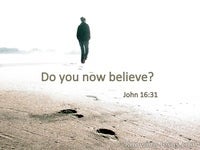