'He who overcomes, I will grant to him to sit down with Me on My throne, as I also overcame and sat down with My Father on His throne. 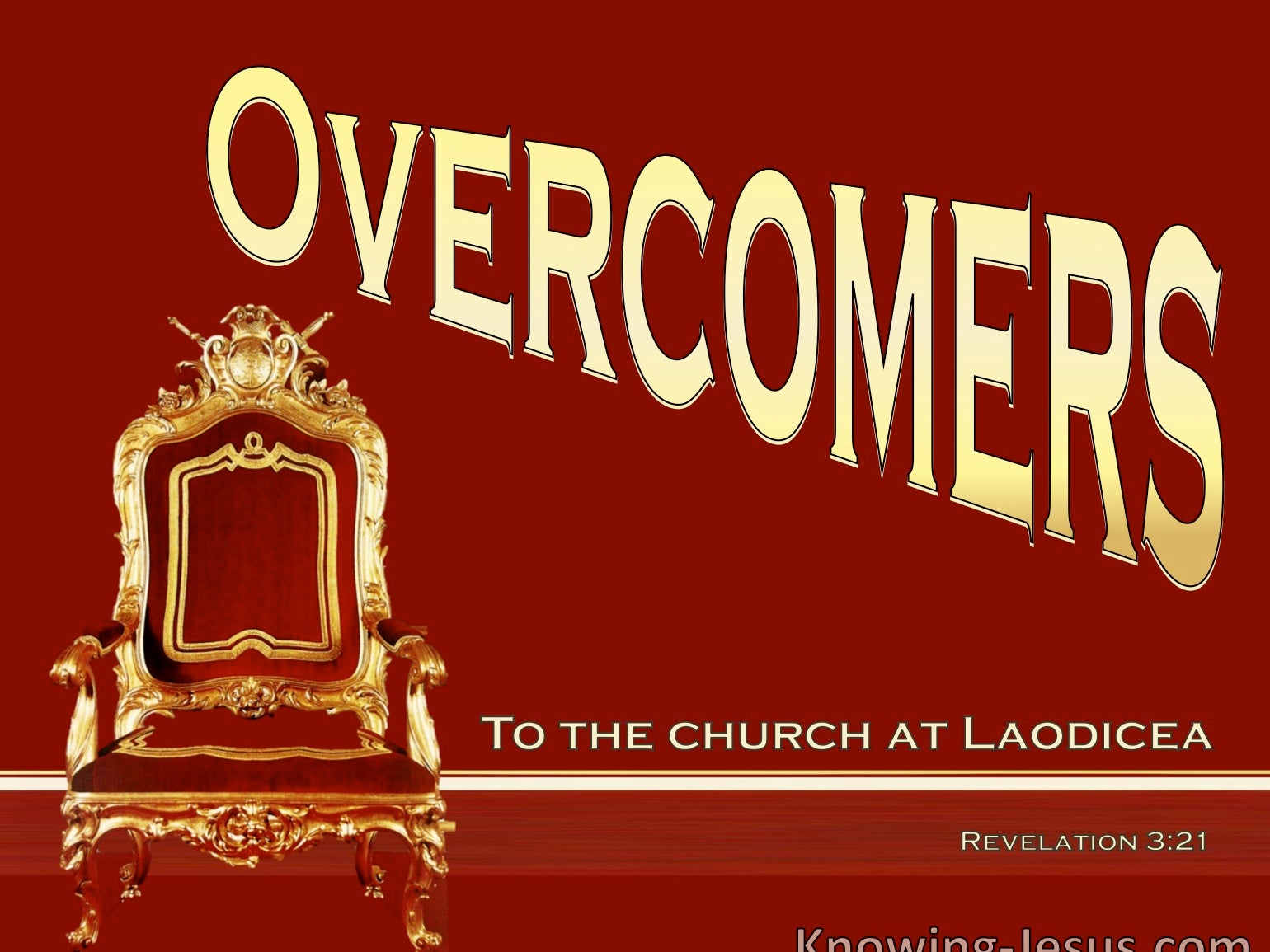 The message about the cross is nonsense to those who are being destroyed, but it is God's power to us who are being saved. (1 Corinthians 1:18 ISV)

Have you got a Cross in your history? Have you got a grave in your history? If you have not then you are dwelling in the shadows. You may get flashes and touches, but they will be fleeting, transient, coming and going. If you have a Cross and a grave in your experience, in your history, the Holy Spirit has got what He requires, and it is blessedly possible for you to have the abiding of this risen Life in which all these values are made good, and growingly good. What is the new creation? With it there comes first of all a new consciousness. You are conscious that things are new, and things are different. It is a new consciousness as to the Lord. You are alive to that to which you were never alive before; in every realm things are the same, yet entirely different. Somehow or other you move in the same surroundings, and touch the same people, but there is something new. There is a new consciousness. Things have become different....

Not only do we have a new consciousness, but we have a new capacity. The Holy Spirit gives capacities that none of us have by nature. We may by nature be very limited in our capabilities. By the anointing of the Holy Spirit we may have capabilities that the best men and women of this world without the Holy Spirit have not got. A truly Spirit-indwelt child of God has capabilities and capacities that no one else has. This very breathing carries with it capacity. Until Adam was breathed into he had no capacities for all that he was intended to do; but when he became a living soul by the breath of God he had capacities for knowing, for doing, for understanding. The new creation is like that, with new capacities, capabilities for knowing, for understanding, for doing, that we never had before. No child of God ought ever to settle down and finally accept the position that they "cannot" in any particular. We should never say in any matter that is presented to us in the will of God, "I cannot." The presence of the Holy Spirit means capability and capacity for doing things which we could never do before. We ought to prove the Lord in that way.

Whoever finds me finds life, and obtains favor from the Lord.

Thus says the Lord: “Let not the wise man glory in his wisdom, let not the mighty man glory in his might … but let him who glories glory in this, that he understands and knows Me, that I am the Lord.” § The fear of the Lord is the beginning of wisdom.

What things were gain to me, these I have counted loss for Christ. Yet indeed I also count all things loss for the excellence of the knowledge of Christ Jesus my Lord, for whom I have suffered the loss of all things, and count them as rubbish, that I may gain Christ. § In [Him] are hidden all the treasures of wisdom and knowledge. § Counsel is mine, and sound wisdom; I am understanding, I have strength. § Christ Jesus … became for us wisdom … and righteousness and sanctification and redemption. § He who wins souls is wise.

Poor, yet making many rich.

You know the grace of our Lord Jesus Christ, that though He was rich, yet for your sakes He became poor, that you through His poverty might become rich. § Of His fullness we have all received, and grace for grace. § My God shall supply all your need according to His riches in glory by Christ Jesus. § God is able to make all grace abound toward you, that you, always having all sufficiency in all things, may have an abundance for every good work.

We have this treasure in earthen vessels, that the excellence of the power may be of God and not of us.

Now no chastening for the present seemeth to be joyous, but grievous" (Heb. 10:11a).

You will be prepared, but never pierced, by the nail-pierced Hand.

"Sufferings are for chastening (child-training). And chastening is from love, a token of our Father's care. We live in a world full of trial and suffering. Many of the Lord's people have complained that their circumstances were too unfavorable for a life of full devotion, of close fellowship with Him, or pressing on to maturity. The duties and difficulties, the cares and troubles of life, render it practically impossible, they say, to live a fully consecrated life.

"Would God that they might learn the lesson of His Word! Every trial comes from the Father as a call to come away from the world to Him, to trust Him, to believe in His love. In every trial He will give strength and blessing. Let but this truth be accepted, in each trial, small or great; first of all and at once, recognize the Father's hand in it. Say at once, I welcome it from Him; my first care is to glorify my Father - He will use it all for my good."

"Do not be afraid of the Father's training school. He both knows His scholars, as to what they are, and He knows for what service they are to be fitted. A jeweler will take more pains over a gem than over a piece of glass; but the one he takes most pains over is longest under discipline and most severely dealt with. Once finished, however, the burnish never tarnishes, the brightness never dims. So with us. If we are placed, at times, as in a furnace, it is not merely for earthly service, but for eternity. May you so appreciate the plans of your Father that you can triumphantly glory in the love that subjects you to such discipline, though the trial itself be sharp and to the flesh hard to bear." -J.H.T.

"Nevertheless, afterward it yieldeth the peaceable fruit of righteousness unto them who are exercised by it" (Heb. 12:11b).

A Matter of Trust

For Christ is the end of the law for righteousness to everyone who believes. For Moses writes that the man who practices the righteousness, which is based on law, shall live by that righteousness.
Romans 10:4-5

The unreachable standard of God’s Law was to be set aside for a new life in Christ. A man seeking to live by any Law must be prepared to keep every part of that law. But works of the law are unacceptable to God for all man’s righteousness is dross to God. But a believer with a new life in Christ is to live his life by grace and not by works of the Law.

A man who seeks to live by the Law must be prepared to keep every part of that law, but the one who died to the Law with Christ has been given a new Christlike nature. A Christian with a new life in Christ must die to self so that Christ lives in him.

This was a tough concept for religious Jews to accept, who were steeped in tradition. But increasingly in John’s gospel, we find the suffocating regulations of the perfect Law, starkly contrasted with willing, gentile acceptance, of Christ’s grace and truth. Jesus came as the Jewish Messiah and the Saviour of the world, but during His earthly ministry, we are reminded that He only came to the lost sheep of the house of Israel.

Yet in Him was life and in Him was light to all men – and in Him was grace and truth. And throughout the gospel of John, we see beautiful glimpses of His heart for everyone. The loose-living woman at the well in Samaria warranted death by stoning under the Law, yet was offered living water by the Messiah,rather than words of condemnation.. and by believing on the Lord Jesus Christ she was given eternal life.

Nicodemus, a pious Jewish leader, struggled with the idea of grace rather than human merit to gain God’s acceptance. Self-righteous pride

How we long to know answers to those eternal questions deep in the heart of man. WHY we ask – why did she leave? why did he betray me? why did they have to die? HOW we ask – how can I cope being alone? how am I going to make ends meet? WHEN we ask – when will this nightmare end? when is the Lord returning for us? WHAT we ask – what am I going to do now? what is going to happen to us now?

The human heart desires to know answers to so many unanswerable questions. Believers are not exempt from a longing to know answers to imponderable issues. Man’s mission in life is to discover the unknowable which is hidden deep in the mind of God. This desire to know the answer has its root in Eden’s great, glorious garden.

How tempting the fruit of that tree of knowledge – tucked away in Eden’s glen. How this mind-set is so contrary to the one that God desires His own to seek after: Let this mind be in you that was in Christ Jesus. Philippians 2:5 ..a mind that trusts Him explicitly despite the unbearable and the unimaginable – a heart that trusts Him implicitly and rests all questions in His understanding. But how this attitude of all-knowing and full understanding is so contrary to His will, and how the enemy has used this insatiable desire to bring many to the pit of despair.

I once heard a wise woman describe her illumination to the eternal question … Why Me? ~Why Me Lord? ~Why them? What have I done to deserve this? What have they done to deserve that? “Why” she asked, “was my son born so crookedly disabled. Why did my son have to die?  Why did this have to happen to me and why did this have to happen to him…” After months – years of intense heart-searching and deep despondency, she realised and understood the deeper meaning.. “Why not