The Authority Of Sight

If you and I were allowed to be perfectly satisfied with what we have got at any stage, and not to feel the absolute necessity for something we never have had, should we go on? Of course not! To keep us going on, the Lord has to bring about those experiences where it is absolutely necessary for us to see the Lord, and know the Lord in a new way, and it must just be so all the way along to the end. It may be a series of crises of seeing and seeing again, and yet again, as the Lord opens our eyes, and we are able to say, as never before, "I see!" So it is not our study, our learning, our book knowledge, but it is a spirit of wisdom and revelation in the knowledge of Him, the eyes of our hearts being enlightened, and it is that seeing which brings the note of authority that is so much needed. That is the element, the feature, that is required today. It is not just seeing for seeing sake, but it is to bring in a new note of authority.

Where is the voice of authority today? Where are those who are really speaking with authority? We are languishing terribly in every department of life for the voice of authority. The Church is languishing for want of a voice of spiritual authority, for want of that prophetic note "Thus saith the Lord!" The world is languishing for want of authority, and that authority is with those who have seen. There is far more authority in the man born blind seeing, in his testimony "One thing I know that, whereas I was blind, now I see" than there is in all Israel, with all Israel tradition and learning. And may it not be that that was the thing about the Lord Jesus that carried such weight, for "He spoke as One having authority, and not as the Scribes" (Matt. 7:29). The Scribes were the authorities. If anybody wanted an interpretation of the law, they went to the Scribes. If they wanted to know what the authoritative position was, they went to the Scribes. But He spoke as One having authority, and not as the Scribes. Wherein lay that authority? Just that in all things He could say, "I know! It is not what I have read, what I have been told, or what I have studied that is with power, but this I know! I have seen!" 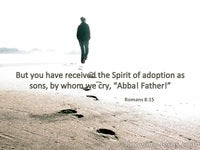