The Body of Christ - Once Upon Eternity (2)

STUDY - Once Upon Eternity

Oh what glorious and profound statements and yet, what an announcement of pure, divine simplicity. The old and new combine into a cacophony of unutterable harmony. The beginning testimony of our wonderful Saviour demonstrates purity and order. Each verse thunders of the magnificence and majesty of the triune Godhead. Each verse journeys back to that point where God spoke creation into being. In the beginning, God created the heaven and the earth.

This succinct statement has caused many mighty minds of men to wonder. This brief synopsis has confounded magnificent minds for millennia. This awesome truth has caused a library of postulations to be penned, and yet this simple testimony is so wholesomely pure.. that even a little child can hear and understand.

This was the moment that the triune God brought the material universe into existence. This was a demonstration of His absolute, sovereign power over His creation. He started painting His earth from a formless void. He began His masterwork at the point where darkness hung like a shrouded veil. His great work of art began to unfold with spectacularly simple, multi-hued strokes – brilliant brushstrokes of His mighty Word.

He began to hover over the darkness, as the vibrating breath of everlasting life.. brooded over thick, intense darkness, that shrouded the face of the deep. Following an anticipated movement of hushed animation and heightened tension, God started to apply the first brushstrokes of His work of art. He begins to score the first note.. and His melodious music begins to play. LET THERE BE LIGHT.. Then came streaming forth:- Light. Pure light, magnificent light, glorious light, And then came forth the Light of Life: I am the light of the world. He who follows ME shall not walk in darkness, but have the Light of Life.

The brilliance of this creative miracle illumines the unfolding masterpiece – a masterpiece of lustered radiance. Let there be an expanse in the midst of the waters, and let it separate the waters from the waters. Creation in its infancy resembles a gorgeous gemstone.. a jewel as yet uncut.. stark in its beauty and magnificence. And God in His wisdom began to fashion the raw materials. He began to form the un-worked clay. Light and dark; water and dry land; sea and sky; heaven and earth; mountains and valleys. Formless and empty becomes fashioned and filled – and still the Master Craftsman plies on.. Let the earth sprout vegetation.. yielding seed, and fruit trees bearing fruit.. in which is their seed, each according to its kind, on the earth… and it was so.

Great realms and domains and spheres and activities continue to be added. More and finer and purer and complete detail spills across creation’s page. Let there be lights in the expanse of the heavens.. to separate the day —– —– from the night. And let them be for signs and for seasons and for days and for years.. and it was so. And still more detail was poured fourth – streaming into the waters and flung far into the skies – Let the waters swarm with swarms of living creatures, and let birds fly above the earth, across the expanse of the heavens, and God saw that it was good.

Forest and meadow, mountain and hill, burst forth in magnificence of colour and design. Ponds and pools, streamlets and seas, fountains and droplets – all cascading their sparkling beauty. Oaks and silver birch, buttercups and tulips, peaches and plums burst forth.. in great abundance. Herons and nightingales, jewel-fish and mackerel, humming birds and octopus – gazelles and camels, buffalo and butterflies, otters and turtles. Yet following this astonishing array of creative brilliance and breathtaking beauty, our God took in His hands a lump of clay – dust of the created earth. And fashioned and formed and kneaded and shaped and constructed and built.. And God formed a man out of dust of the earth.

But this was no ‘ordinary’ created being. This was His masterpiece, His “magnnum opus“, His “tour de force” – the apex of His creation. This was the quintessential pinnacle of His entire glorious creation. For God set His own image upon the earth, And God fashioned man into His own likeness. The Lord God formed the man of dust from the ground, and breathed into his nostrils the breath of life, and man became a living creature.

And through Adam’s seed was born Jesus. Through Adam was born the Son of Mary and Only Begotten Son of God. And the Holy Spirit descended upon Jesus in bodily form, like a dove.. and a voice came from heaven. ‘You are my beloved Son; with You I am well pleased’, and when Jesus, began His ministry, He was about thirty years of age… being the son of Mary.. the son (as was supposed) of Joseph…..back to…..the son of Seth, the son of Adam – the son of God.

Oh, the depth of the riches and wisdom and knowledge of God! How unsearchable are His judgments and how inscrutable His ways! And so from that mysterious beginning, we trace that precious blood-red thread. The Scarlet Thread of Redemption… Across the landmarks of time and space… Across the realms of history and eternity.. as God, Who from before the foundation of the world, chose us in Christ to be members of His body. 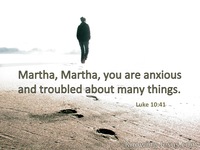