Assuming The Place Of Christ

Watch out that no one deceives you. For many will come in My Name, claiming I am the Christ, and will deceive many. (Matthew 24:4,5 NIV)

In a somewhat extended life and ministry, again and again I have seen dear people of God who were out in the open going on with the Lord in the liberty of the Spirit with great promise and then theye been caught in some sm.They simply are helpless to escape themselves from the tenets of that sm.Again and again Ie seen it! Tragedy.... There a great smsweeping right over America and over Europe in these last years. I can dare to mention this one, well I going to at any rate: Universalism. It an smwhich has captured multitudes! And you just can get anywhere with these people once theye got it. But I have known them, oh so promising... so promising and then this thing has come subtly along their way, attractive and fascinating.... So appealing: everybody, ultimately, including the devil himself, will be saved. What are you going to do with that? Willy-nilly theyl be saved... undercutting so many of the very vitals of the Gospel.

You may call these things gross errors, but there are things that are not such errors. Not such errors, indeed in themselves theye quite true, but they have become the beginning of all and the end of all to the people who have taken them on. You can get no further, no further. They have lost the great ground, the vast ground of God full purpose for this dispensation and become stuck on some thing that is only partial at best. Arrested... like Judaism; come to a standstill, or going round and round in a circle, the circle of this particular thing. It should be a warning to us because, you see, this is the thing that has been the enemy of the fullness of Christ all through the centuries - this sort of thing.... There are many antichrists in the world and an antichrist is not a spurious, fearful creature, you know, with a tail and a pitchfork. No, an antichrist is something that assumes the place of Christ.... And with the natural judgment, natural powers, you are not able to distinguish between the true and the false. The Christ and the antichrist seem to be so much alike. You can discern the difference, but the Anointing will tell you! The Anointing which you have received, when you come into touch with something false, will tell you if the Anointing is really governing, saying, e careful,not in words, but inside. You have a feeling there something not quite clear here, not transparent here, not safe here... don feel happy about this, I can tell you why but I just don feel quite happy about this... there something in me that says: beware.I am convinced that in a day like this of deceptions and misleadings and all that, the great need is our spiritual discernment; of knowing the Holy Spirit in this way, that He able to warn you.

By T. Austin-Sparks from: The Cross of Our Lord Jesus Christ - Chapter 5 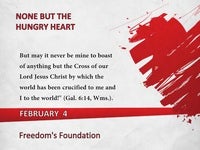 Freedom's Foundation
Have You Considered How and Why? (JOB-study 14)
I Have Loved YOU