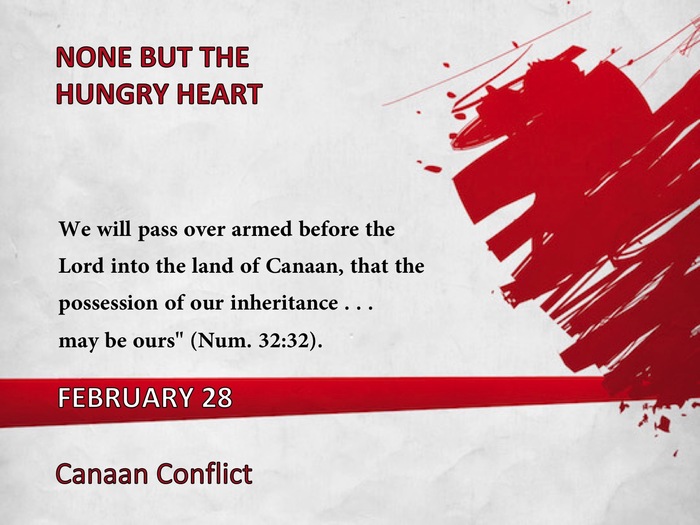 We will pass over armed before the Lord into the land of Canaan, that the possession of our inheritance . . . may be ours" (Num. 32:32).

If our Lord were to give rest from the processing required for spiritual growth, by what means would He accomplish His work in us? True, the war has been won at Calvary, but there are many "mopping up" battles to be fought. Victory is ours, but we must learn how to wear our armor and handle our weapons. We must also come to know and appreciate our Captain as we enter into what He has accomplished on our behalf.

"The Christian who imagines that life in the Promised Land is one of rest from temptation and conflict, is due for a surprise. There is not less temptation, but more strong and subtle temptation. There is no less conflict, but more constant conflict. The difference lies in the fact that in Canaan the battle is not fought under our own leadership, but under that of the Victorious Man with the drawn sword, who has never suffered defeat. It is not rest from conflict, but rest in conflict. In Canaan, Israel lost only one battle in seven years, and that was because of culpable disobedience and sin." -O.S.

"It has been well said that spiritual believers are honored with warfare in the front line areas. There the fiercest pressure of the enemy is known. But they are also privileged to witness the enemy's crushing defeat, so abundant is the power of God, and thus highly is the spiritual believer honored." -L.S.C.

"No weapon that is formed against thee shall prosper.... This is the heritage of the servants of the Lord, and their righteousness is of Me, saith the Lord" (Isa. 54:17). 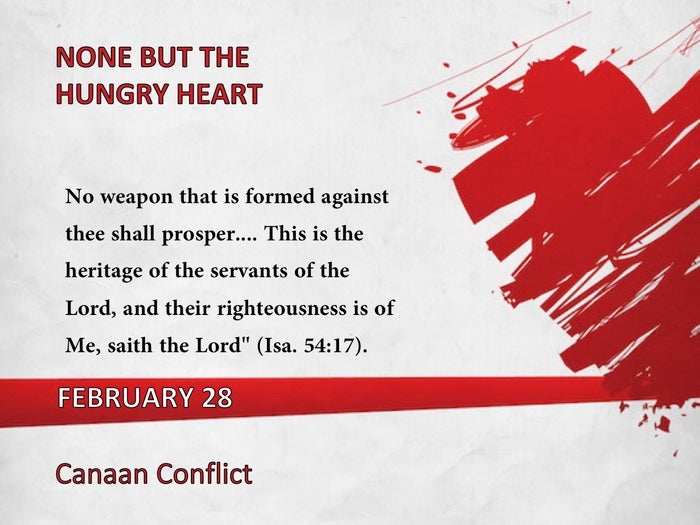