'He who has an ear, let him hear what the Spirit says to the churches To him who overcomes, I will grant to eat of the tree of life which is in the Paradise of God.' 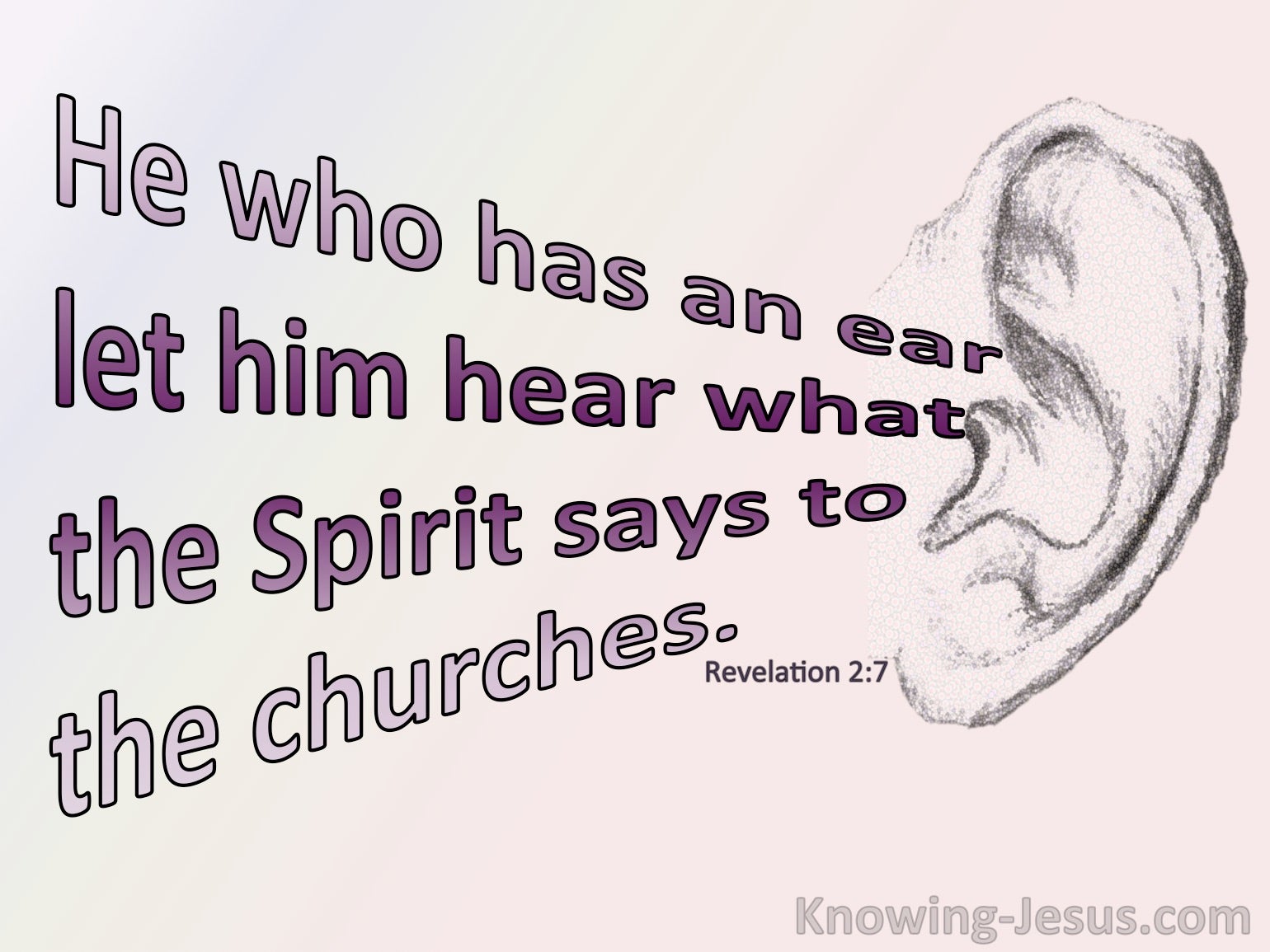 "You have no business to be here" that is what it means. Yes, prophets and apostles could make mistakes, and they did; but there is this about it because they had seen, and were utterly abandoned to that which they had seen of the Lord's mind, the Lord was abundantly able to come in on their mistakes and sovereignly overrule them and teach His servants something more of Himself and His ways. Now, you never find that with people who are indefinite. The indefinite people, those who are not meaning business, who are not abandoned, never do learn anything of the Lord. It is the people who commit themselves, who let go and go right out in the direction of whatever measure of light the Lord has given them, who, on the one hand, find their mistakes the mistakes of their very zeal taken hold of by Divine sovereignty and overruled; and, on the other hand, are taught by the Lord through their very mistakes what His thoughts are, how He does things, and how He does not do them. If we are going to wait in indefiniteness and uncertainty and do nothing until we know it all, we shall learn nothing.

Have you not noticed that it is the men and women whose hearts are aflame for God, who have seen something truly from the Lord and have been mightily gripped by what they have seen, who are the people that are learning? The Lord is teaching them; He does not allow their blunders and their mistakes to engulf them in destruction. He sovereignly overrules, and in the long run they are able to say, "Well, I made some awful blunders, but the Lord marvelously took hold of them and turned them to good account." To be like this, with vision which gathers up our whole being and masters us, provides the Lord with the ground for looking after us even when we make mistakes because His interests are at stake, His interests and not our own are the concern of our heart. The prophets and the apostles learned to know the Lord in wonderful ways by their very mistakes, for they were the mistakes, not of their own stubborn self-will, but of a real passion for God and for what He had shown them as to His purpose.

Do you not fear Me?” says the Lord. “Will you not tremble at My presence, who have placed the sand as the bound of the sea, by a perpetual decree, that it cannot pass beyond it? And though its waves toss to and fro, yet they cannot prevail; though they roar, yet they cannot pass over it.” § Exaltation comes neither from the east nor from the west nor from the south. But God is the Judge: He puts down one, and exalts another.

He changes the times and the seasons; He removes kings and raises up kings; He gives wisdom to the wise and knowledge to those who have understanding. § You will hear of wars and rumors of wars. See that you are not troubled.

If God is for us, who can be against us? § Are not two sparrows sold for a copper coin? And not one of them falls to the ground apart from your Father’s will. The very hairs of your head are all numbered. Do not fear therefore; you are of more value than many sparrows.

Take heed to your spirit.

Master, we saw someone casting out demons in Your name, and we for- bade him because he does not follow with us.” But Jesus said to him, “Do not forbid him, for he who is not against us is on our side.” … “Lord, do You want us to command fire to come down from heaven and consume them, just as Elijah did?” But He … rebuked them, and said, “You do not know what manner of spirit you are of.”

“Eldad and Medad are prophesying in the camp.” So Joshua the son of Nun … answered and said, “Moses my lord, forbid them!” Then Moses said to him, “Are you zealous for my sake? Oh, that all the Lord’s people were prophets and that the Lord would put His Spirit upon them!”

The fruit of the Spirit is love, joy, peace, longsuffering, kindness, goodness, faithfulness, gentleness, self-control … And those who are Christ’s have crucified the flesh with its passions and desires. If we live in the Spirit, let us also walk in the Spirit. Let us not become conceited, provoking one another, envying one another.

In quietness and in confidence shall be your strength" (Isa. 30:15).

Time is a prime factor in one's assurance of the Father's leading. Rush and agitation are the prime factors in the Enemy's leading. God will give us time to watch and make sure; Satan demands action, right now!

"There is a way to distinguish between the Father's leading and Satan's angel of light' leadings. The Father's promptings never nag, or worry, or harass. Satan's do just that. If one has a seeming leading' to do something that in itself is good, yet with the impulse there is a sense of nagging disquiet, and being driven in a certain direction, that is the Enemy's trademark; and his false leading is to be immediately recognized and rejected. The Holy Spirit's leadings comes with a sense of peace and quiet, even if they point in a really difficult direction which only the grace of the Father can enable one to follow." -C.G.T.

"Be careful who takes you up into the high mountain! When the devil takes you into the heights, he always shows you the kingdoms of this world, and the glory of them; when the Lord Jesus takes you up, He is always transformed before you."

What Is A Missionary?

A missionary is one sent by Jesus Christ as He was sent by God. The great dominant note is not the needs of men, but the command of Jesus. The source of our inspiration in work for God is behind, not before. The tendency to-day is to put the inspiration ahead, to sweep everything in front of us and bring it all out to our conception of success. In the New Testament the inspiration is put behind us, the Lord Jesus. The ideal is to be true to Him, to carry out His enterprises.

Personal attachment to the Lord Jesus and His point of view is the one thing that must not be overlooked. In missionary enterprise the great danger is that God's call is effaced by the needs of the people until human sympathy absolutely overwhelms the meaning of being sent by Jesus. The needs are so enormous, the conditions so perplexing, that every power of mind falters and fails. We forget that the one great reason underneath all missionary enterprise is not first the elevation of the people, nor the education of the people, nor their needs; but first and foremost the command of Jesus Christ - "Go ye therefore, and teach all nations."

When looking back on the lives of men and women of God the tendency is to say - What wonderfully astute wisdom they had! How perfectly they understood all God wanted! The astute mind behind is the Mind of God, not human wisdom at all. We give credit to human wisdom when we should give credit to the Divine guidance of God through childlike people who were foolish enough to trust God's wisdom and the supernatural equipment of God.

I will go and return to my place, till they acknowledge their offence, and seek my face: in their affliction they will seek me early.
Hosea 5:15

Israel’s promised kingdom was put on hold, for their King had returned to heaven. Jesus had told his Jewish brethren that He would return at a very special time. Jesus would only return to set up His kingdom when Israel repented of their sins, acknowledged their offense, and called on His name: for I tell you, you will not see me again, until you say, ‘Blessed is He who comes in the name of the Lord.’ Matthew 23:39

What joy filled the hearts of the apostles and other believers after the resurrection. The reality of Christ’s resurrection gathered pace as more and more saw their Lord. He first appeared to Mary and the women, then Peter – then to James and His disciples in the upper room. His meeting with His absent apostle caused Thomas to cry out, my Lord and my God.

What joy must have rippled through the crowd of 500 who saw Him at the one time.1 Corinthians 15:5 He appeared over a period of forty days and spoke about the kingdom of God, and He gave them many convincing proofs that He was alive. Acts 1:3

How their hearts must have stirred as they heard Christ speak of His coming kingdom. For centuries the little nation of Israel had been expecting their promised Messiah, and for three days and three nights their hopes must have been dashed to the ground – for the One they thought was to redeem the nation – lay cold in a borrowed tomb.

But the shock-horror of the crucifixion melted on that glorious resurrection morn. Their deep despair changed to awe and wonder as He talked of the coming kingdom. He appeared to them over a period of forty days and spoke about the kingdom of God, and curiosity prompted the question – When will You restore the kingdom to Israel?

We are surrounded by so great a cloud of witnesses …”
Hebrews 12: 1

We are not lone witnesses, however cheerless, isolated, or hard our spiritual walk. We are not a solitary witness, however deeply Christendom wallows in apostasy. We are preceded by a numerous and exemplary cloud of worthy witnesses – witnesses that however humble in spirit are giants in the faith that pleases God.

This huge throng of many unnamed souls fills our spiritual horizon. We live and move and have our being in Christ – in the wake of their testimony. Some imagine this huge throng to be peering in on their own private little lives. An intrusive band of peeping-toms invading our personal space or scrutinising us. We have no scriptural authority to see them as spectators, looking in on all we do!

Their witness was by their lives – lives that were lived by faith in God – lives that in many cases were sordid and sinful – yet lives that trusted God. Theirs were rarely a life that we should emulate – for many engaged in foolish actions. Oft-times their faith for which they are applauded was weak, sinful, carnal, or careless.