If anyone advocates a different doctrine and does not agree with sound words, those of our Lord Jesus Christ, and with the doctrine conforming to godliness, 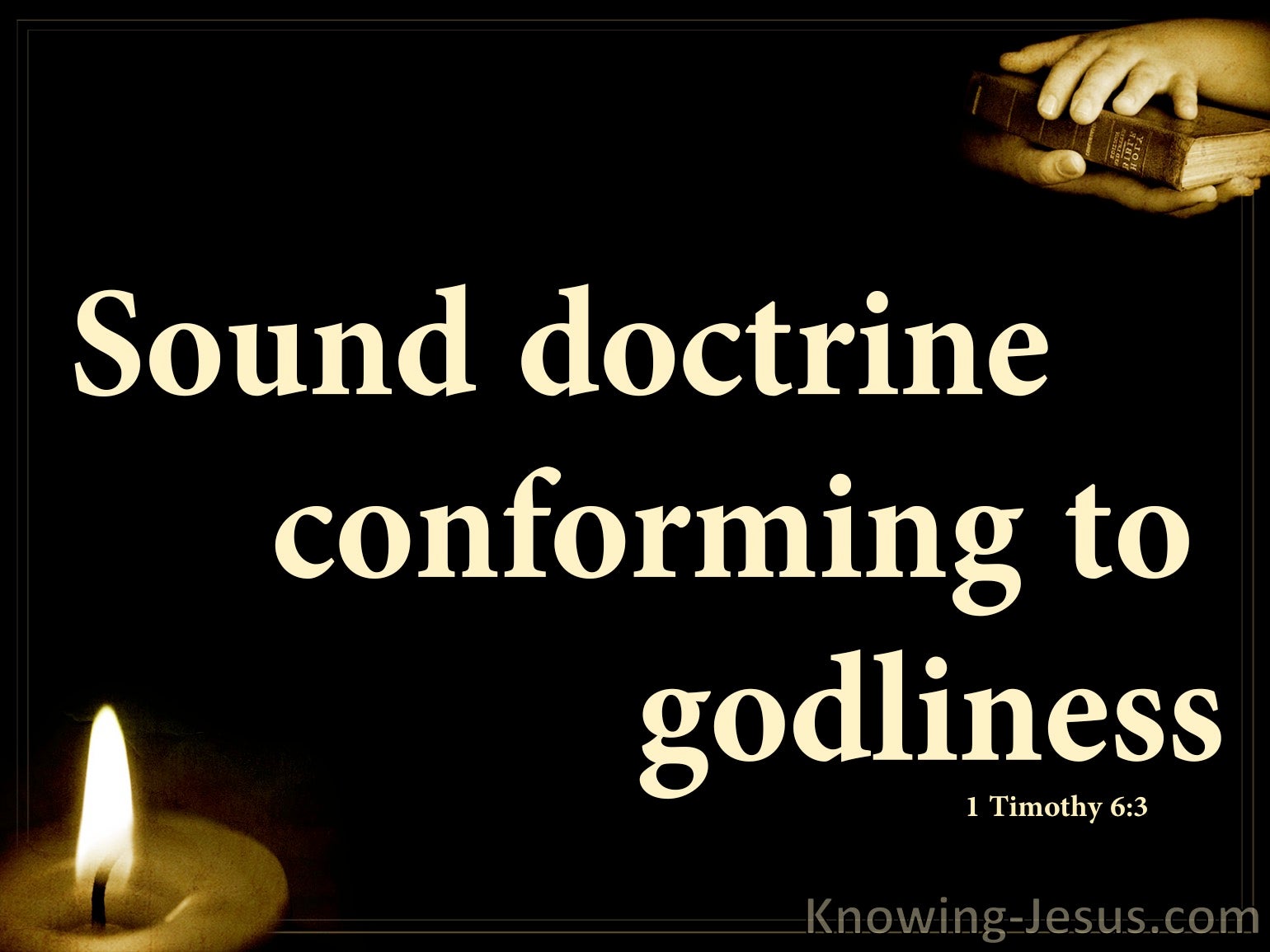 The Supreme Purpose of God

Since the promise of entering His rest still stands, let us be careful that none of you be found to have fallen short of it. (Hebrews 4:1 NIV)

For those who, like the New Testament writers, have a real burden and sense of responsibility for the spiritual life of God's people, one of the most heart-breaking things is the way in which so many who gave promise of going right on with the Lord are caught in some side-track and turn to something other or less than He meant for them. Not necessarily to sin or to the world, but to something which, while it brings them a great deal of gratification for a time, eventually proves to be a diversion resulting in arrested spiritual growth, and they are found in a backwater, a cul-de-sac, occupied with an alternative to "the whole counsel of God." Their "new discovery," or "light," or "guidance," as they speak of it, by reason of the let-up of some tension, solution to some problems, promise of release into self-realization, and escape from pressure, when the novelty and glamor have worn off is found to have been "deceitful waters," producing Jericho's fruits which fall before they are ripe....

The peril or snare will be cunningly and ingeniously adapted to the 'prey.' What would capture some would make no appeal to others. The most spiritual will be presented with what appears to be most spiritual. Our particular temperament will be our peculiar danger. We shall have to, ever and always, be governed by principle, and not by feelings, preferences, arguments, or natural appeal. Intellectual palliatives, emotional ecstasies, activity-gratifications must be suspected or challenged. The one question must be paramount Where does this lead? Does it essentially and intrinsically relate to the one supreme purpose of God?

Be watchful, and strengthen the things which remain, that are ready to die.

The end of all things is at hand; therefore be serious and watchful in your prayers. § Be sober, be vigilant; because your adversary the devil walks about like a roaring lion, seeking whom he may devour. § Take heed to yourself, and diligently keep yourself, lest you forget the things your eyes have seen, and lest they depart from your heart all the days of your life. §  “The just shall live by faith; but if anyone draws back, my soul has no pleasure in him.” But we are not of those who draw back to perdition, but of those who believe to the saving of the soul.

Fear not, for I am with you; be not dismayed, for I am your God. I will strengthen you, yes, I will help you, I will uphold you with My righteous right hand … I, the Lord your God, will hold your right hand.

Has His mercy ceased forever?

His mercy endures forever § The Lord is longsuffering and abundant in mercy. § Who is a God like You, pardoning iniquity … ? He does not retain His anger forever, because He delights in mercy. He will again have compassion on us, and will subdue our iniquities. You will cast all our sins into the depths of the sea. § Not by works of righteousness which we have done, but according to His mercy He saved us.

Blessed be the God and Father of our Lord Jesus Christ, the Father of mercies and God of all comfort, who comforts us in all our tribulation, that we may be able to comfort those who are in any trouble, with the comfort with which we ourselves are comforted by God.

A merciful and faithful High Priest in things pertaining to God, to make propitiation for the sins of the people. For in that He Himself has suffered, being tempted, He is able to aid those who are tempted.

The Cross, Then Consecration

The carnal mind is enmity against God: for it is not subject to the law of God, neither indeed can be" (Rom. 8:7).

The Cross is the altar upon which God sacrificed His Son. It is upon this same Cross (take up your Cross "daily"), this same altar (the place of death), that I am to be consecrated to God as "a new creation" (2 Cor. 5:17). This eventuates in my intelligently yielding myself to Him as one who is "alive from the dead" (Rom. 6:13).

"God asks us to present our bodies as living sacrifices to Him (Rom. 12:1). Until we have done this, there is nothing else we can do. But notice that this exhortation comes after Romans Six. There is a reason for this order - crucifixion comes before consecration. Uncrucified self refuses to be consecrated (to say nothing of God's refusing to accept it). That is why so many people with all sincerity walk down the aisles again and again, consecrating uncrucified self to God." -H.D.

"We must learn to know Him and to love Him. Then we will not have to struggle to move into consecration. The heart will lead into it. A lover never thinks about giving himself to a loved one. He cannot do otherwise. He loves to do it. Is there not here a key to consecration? Why do we not yield? Because we do not love. Why do we have to fight the battle and vow and groan and struggle? Because we do not know Him." -C.A.C.

Being confident of this very thing, that He which hath begun a good work in you will perform it until the day of Jesus Christ.
Philippians 1:6

There is no quick way to grow in grace and become spiritually mature. Spiritual maturity embraces pain and joy, suffering and happiness. Sanctification means death as well as life.. the cross before the throne. Growing in grace requires failure as well as success, inactivity as well as service. How vital that we understand and accept that God takes His time in our training. How wonderful to know that God will finish His work in the life of each believer. And it will take that long! God is working in each life for eternity, and we must grasp hold of the scriptural fact that maturing in the faith takes time.

There are no shortcuts to spiritual growth. It’s a lifetime of learning to trust God. Sanctification is a process which starts at rebirth and terminates at His appearing. One dear saint encourages all who desire to live godly, by telling us that: “Spiritual renewal is a gradual process. All growth is progressive and the finer the organism, the longer the process. It is from measure to measure: thirty-fold, sixty-fold, an hundred-fold. It is from stage to stage: first the blade, then the ear, and after that, the full corn in the ear. And it is from day to day. How varied these are!”

There are great days, days of decisive battles, days of crises in spiritual history, days of triumph in Christian service, days of the right hand of God upon us. But there are also idle days, days apparently useless, when even prayer and holy service seem a burden. Are we, in any sense, renewed in these days? Yes! for any experience which makes us more aware of our need of God must contribute to spiritual progress, unless we deny the Lord Who bought us. There are no shortcuts to sanctification, which is a lifetime growth in trusting God.

Holiness To The Lord

As He who called you is holy. You also be holy in all your conduct.
1Peter 1:15

Being confident of this very thing, that He who has began a good work in you will complete it, until the day of Jesus Christ.
Philippians 1:6

Whatever happened to the worship of the true and living God Almighty? What has replaced the awe and wonder of the all-powerful, omnipotent Creator? What has been exchanged for the preeminent, omniscient, Lord of heaven and earth? What is this ‘God All-Matey‘ that has crept into the vision of so many today? He is indeed our Saviour and Shepherd; our Friend and Bridegroom, but His loving-kindness has been converted into indulgence. His powerful strength has been metamorphosed into soppy weakness.

Oh, He remains Alpha and Omega, the Beginning and the End the First and the Last:- His head and His hairs were white like wool, as white as snow, and His eyes were as a flame of fire, and His feet like unto fine brass – as if they burned in a furnace and His voice as the sound of many waters. And He had in His right hand seven stars, and out of His mouth went a sharp two-edged sword, and His countenance was as the sun shining in his strength. And John, the beloved disciple who leaned on His breast.. fell at His feet as though dead. John like Daniel was a man greatly beloved, but he fell with his face toward the ground and became dumb.

Angels and Seraphs veil their faces at the splendour of His majesty.. before Him, in Whose sight the heavens are unclean. And they cry in ethereal, rapturous bliss:- Holy, holy, holy, is the Lord God Almighty, Who was and is and is to come!  Revelation 4:8. For He is the One Whose Character is Holy, and Who demands holiness of us.