and it will come about, while My glory is passing by, that I will put you in the cleft of the rock and cover you with My hand until I have passed by. 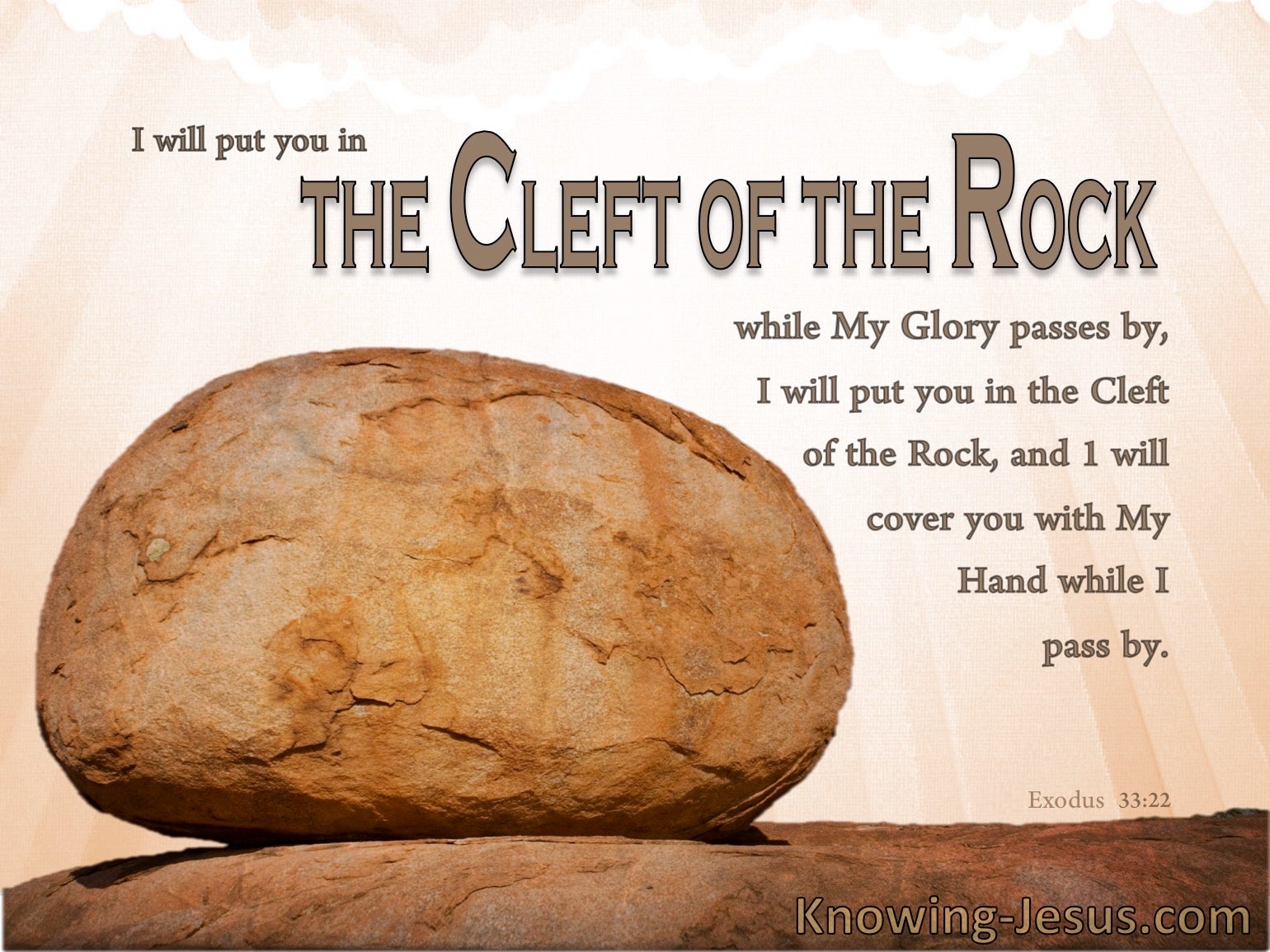 May your whole spirit and soul and body be kept blameless. (1 Thessalonians 5:23 NLT)

You see that God never takes our will away, nor our mind, nor our heart. Some people expect God to come and do all their choosing for them, and all their desiring for them, and all their deciding for them, while they are simply to be poor things picked up by God and put into things which He desires and wills. God never does that. He is developing humanity. Were we spirits, I do not know how we might act; we might act spontaneously. But we are not. God has created a kind of being with a rational mind. The three-fold element of spirit, soul, and body is still to be found, yet not now in Adam, but in Christ. God is developing the Christ mind; how He thinks, judges, understands, and when we see the Lord's mind we see how very different it is from our own natural mind; and our own natural mind is beside the mark altogether, and we must repudiate it. This is spiritual understanding, the mind of the Spirit.

The same thing applies to our feelings and our desires. They may lead us all astray. There is a new outfit in Christ for our hearts, but there is always the necessity for our standing with the Lord in what is of Himself. Passivity may be a most ruinous thing. In all the values of Christ risen there has to be a taking of that risen Life for the equivalent need of mind, heart, will; of spirit, soul, and body.

Surely the Lord is in this place, and I did not know it.

Where two or three are gathered together in My name, I am there in the midst of them. § Lo, I am with you always, even to the end of the age. § My Presence will go with you, and I will give you rest.

Behold, heaven and the heaven of heavens cannot contain You. How much less this temple which I have built! § Thus says the High and Lofty One who inhabits eternity, whose name is Holy: “I dwell in the high and holy place, with him who has a contrite and humble spirit, to revive the spirit of the humble, and to revive the heart of the contrite ones.” § You are the temple of the living God.

Keep yourselves from idols.

My son, give me your heart. § Set your mind on things above, not on things on the earth.

Son of man, these men have set up their idols in their hearts, and put before them that which causes them to stumble into iniquity. Should I let Myself be inquired of at all by them?  § Put to death your members which are on the earth: fornication, uncleanness, passion, evil desire, and covetousness, which is idolatry. § Those who desire to be rich fall into temptation and a snare… For the love of money is the root of all kinds of evil, for which some have strayed from the faith in their greediness, and pierced themselves through with many sorrows… You, O man of God, flee these things.

If riches increase, do not set your heart on them. § My fruit is better than gold, yes, than fine gold, and my revenue than choice silver. § For where your treasure is, there your heart will be also. § The Lord looks at the heart.

Years of preparation are worth a moment of truth! Rest assured that once we are developed and trained by the Holy Spirit, the work whereunto He has called us will be ready and waiting (Acts 13:2). "Our Lord must have an instrument which He has formed in the fire and to which He has given peculiar knowledge of Himself."

"The greater the knowledge committed to a servant, the more necessary and important it is that he should be much alone with God about it, in order that he may realize the nature and effect of it on himself before he undertakes to make it known to others.

"It rebukes the haste and readiness with which many now enter the ministry, attempting to impress others with a measure of the truth which they have not proved for themselves. Surely the servant should ever be able to say: I believed, and therefore have I spoken' (2 Cor. 4:13). It is better to lose time as to work in preparation for service than to lose time in repairing one's mistakes in undertaking a work for which one is not yet qualified."

"A servant's discipline must always be in advance of the service prepared for him. He cannot lead beyond the point to which he himself has been led. But when the depth and reality of the truth has been established in his own soul, he is made the channel of it."

"I have found that many a thing which I had presented in an extreme way because I was sure of it, I put forth in a simpler and a more real way when I had touched it in my own experience." -J.B.S.

Blessings of Grace - Growing In Grace (24)

For you are all sons of God through faith in Jesus Christ.
Galatians 3:26

Stand fast therefore in the liberty by which Christ has made us free, and do not be entangled again with a yoke of bondage.
Galatians 5:1

Oh, you foolish Galatians – you stupid people! Can you hear Paul’s frustration? These people believed the gospel of grace for their salvation and then returned to the old way of legalism. Men and women who were removed from the law of condemnation to that of liberty and life, had willingly returned to the old ways of death, despite Paul being their teacher. These saved, justified believers tried to be sanctified by returning to law! No wonder Paul was frustrated and urged them to: stand fast therefore in the liberty by which Christ has set us free, and do not be entangled again with a yoke of bondage.

We are all sons of God through faith in Christ Jesus and this verse can also be translated: it is through faith in Christ that all of you are sons in union with Christ.   These believers knew about their heavenly heritage and their position in Christ, for in the next verse we read: for as many of you as were baptised into Christ have put on Christ.

Baptised into His Death

Now, this is written in the aorist tense, which denotes an action and not a process. It is written in the passive voice, meaning this is something done to you – it was nothing you did yourself. Being in the indicative mood also emphasises a literal state – an absolute reality. This same gracious blessing is reinforced by Paul both to the Corinthians and Romans: for by one Spirit were we all baptised into one body, whether Jews or Greeks, whether slaves or free, and have all been made to drink into one Spirit, 1Cor.12:13 or do you not know that as many of us as were baptised into Christ Jesus, were baptised into His death? Rom.6:3.

Keep yourselves in the love of God, looking for the mercy of our Lord Jesus Christ unto life for the age. Jude 1-21

Day by day and hour by hour we are exhorted to abide in Him.. and He will lead and guide – and the way you are to go will open. Just remain under the shadow of His wing.. and keep yourself under the covering of His skirt. Hide yourself in the cleft of the rock. And rest and abide and wait.

But this must not be a fruitless abiding. This must not be a treading of water – a beating of time. Discipline yourself in the Word of Truth.. and never neglect those seasons of prayer and praise and thanksgiving.

Those periods of sweet repose in His arms are refreshment to the soul. Those moments of communion with the Father, bring health and wholeness. That time you spend in the Word, will build up your strength. That session you remain on your knees before His throne will lift you up. My soldiers must be prepared for the battle. My instruments must be sharpened and ready for use. My children must open their hearts to hear My voice and obey My word…

So discipline and perfect yourself and welcome my chastening – and don’t balk at the training sessions that come your way. Each is designed for your effectiveness as my witness on earth. All are intended to train you to carry out my plans and purposes. They are purposed to prepare and present you as an overcomer.. overcoming the world, the flesh, the law, and the devil.

So keep yourselves in the love of God.. and watch and wait in keen anticipation for the soon return of the Lord Jesus. May we not be found wanting.. but ready, prepared – waiting.