For our exhortation does not come from error or impurity or by way of deceit; 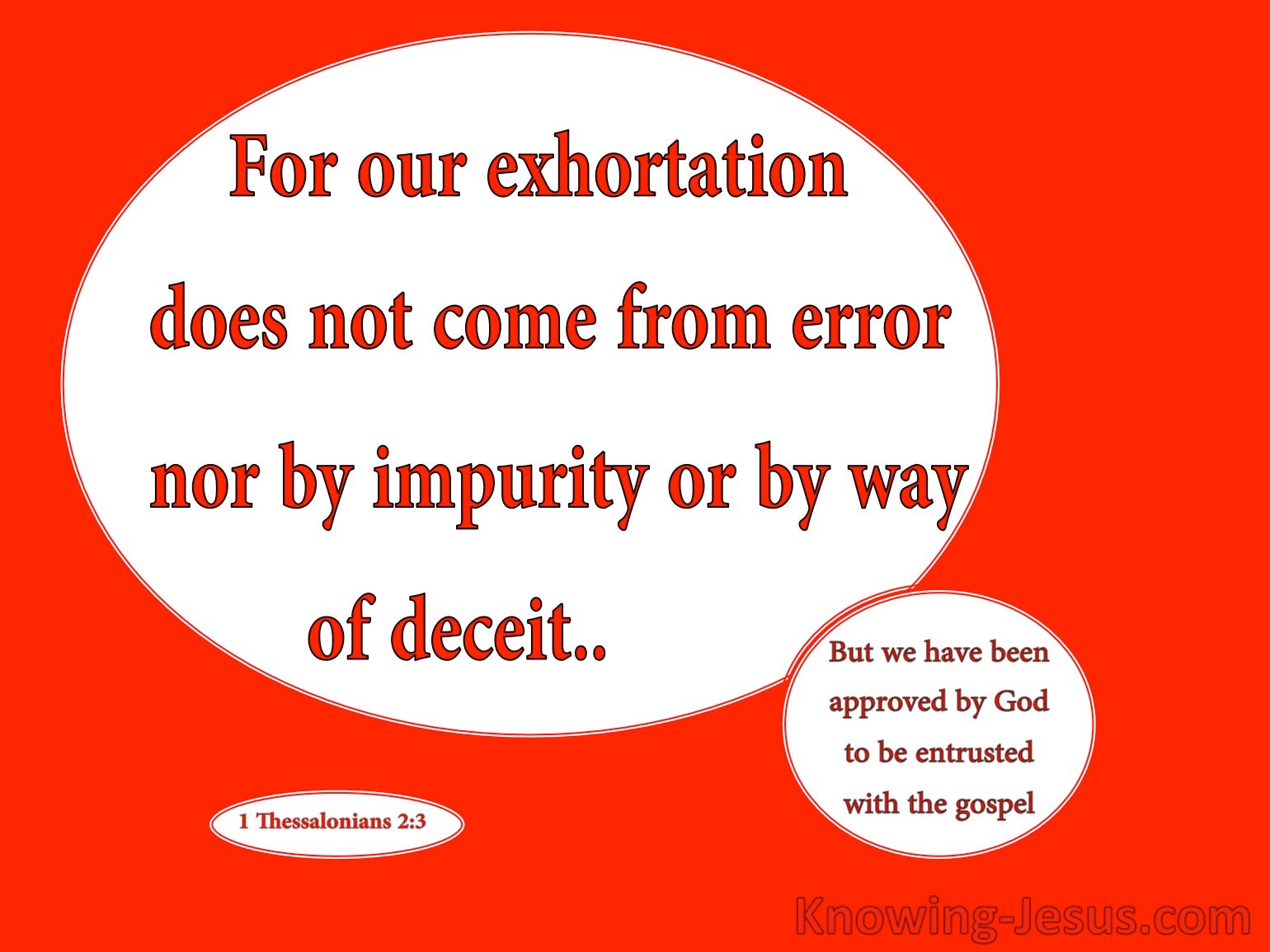 My determined purpose is that I may know Him. (Philippians 3:10 AMP)

There are few words in his writings which reveal how committed to the Lord Jesus this man was. The whole context is one consummate outpouring of his heart to the One whom he said had "apprehended" him, and he focuses all in a brief half sentence: "That I may know Him." The impressive thing about this expressed ambition is the time at which it is made. Here is a man who has had a revelation and knowledge of Jesus Christ greater than any other man up to that time. That knowledge commenced whence as he said, "it pleased God to reveal His Son in me." That beginning devastated him, and sent him into the desert to try to grasp its implications. Later he had been "caught up into the third heaven and shown unspeakable things, which (he said) were not lawful to be uttered." Between, and around those two experiences, there is evidence of an ever growing knowledge of Christ. Here, after all that, near the end of his life, he is crying passionately: "That I may know Him."

The very least that we can say about this is that the Christ in view was a very great Christ indeed, who outstrips the greatest capacity and comprehension of man. This stands in such tremendous contrast to the limited Christ of our recognition and apprehension! How very much more there is in Christ than we have ever seen!

My brethren, be strong in the Lord and in the power of His might.

“My grace is sufficient for you, for My strength is made perfect in weakness.” Therefore most gladly I will rather boast in my infirmities, that the power of Christ may rest upon me. Therefore I take pleasure in infirmities, in reproaches, in needs, in persecutions, in distresses, for Christ’s sake. For when I am weak, then I am strong. §  I will go in the strength of the Lord God; I will make mention of Your righteousness, of Yours only. § The gospel of Christ . . . is the power of God to salvation.

I can do all things through Christ who strengthens me. § I also labor, striving according to His working which works in me mightily. § We have this treasure in earthen vessels, that the excellence of the power may be of God and not of us.

The joy of the Lord is your strength. § Strengthened with all might, according to His glorious power, for all patience and longsuffering with joy.

Jesus, for He will save His people from their sins. § He humbled Himself and became obedient to the point of death, even the death of the cross. Therefore God also has highly exalted Him and given Him the name which is above every name, that at the name of Jesus every knee should bow, of those in heaven, and of those on earth, and of those under the earth.

“Messiah” . . . (who is called Christ.) § The Lord has anointed Me to preach good tidings to the poor; He has sent Me to heal the brokenhearted, to proclaim liberty to the captives.

The last Adam became a life-giving spirit… The second Man is the Lord from heaven. § My Lord and my God! § You call me Teacher and Lord, and you say well, for so I am. If I then, your Lord and Teacher, have washed your feet, you also ought to wash one another’s feet. For I have given you an example, that you should do as I have done to you.

To know the love of Christ which passeth knowledge that ye might be filled with all the fulness of God" (Eph. 3:19).

Our Father's fulness of supply infinitely exceeds the sum of our needs. Positionally it is so: "For in Him dwelleth all the fulness of the Godhead bodily. And ye are complete in Him." Conditionally it is so: "He that spared not His own Son, but delivered Him up for us all, how shall He not with Him also freely give us all things?" (Col. 2:9, 10; Rom. 8:32).

"As to the Gospel and the work of the Lord Jesus, I do not find that it is adequately apprehended that the benefits conferred by the Father is far beyond the need of the sinner. You cannot measure the benefit by the need. You may ask, Does it not cover the need?' It does; but you get no clue to the benefit from the measure of the need. You cannot find it in your own thoughts or expectations; it cannot be found anywhere save in our Father's heart. It is above all that we ask or think. . . .

"How little, indeed, do we enter into the fulness of the benefits of the Gospel! The elder brother in Luke 15 did not object to his brother being forgiven, but it was unwelcome to him to see the wonderful excess of grace bestowed on him by the Father. Thou hast killed for him the fatted calf.' Many have the sense of forgiveness without the knowledge of His abundance." -J.B.S.

"We shall never be able to glorify God, if we only take what we need."

"Now unto Him who is able to do exceedingly abundantly above all that we ask or think according to the power that worketh in us, unto Him be glory" (Eph. 3:20, 21).

I’ve no doubt that all the multitude that exited Egypt under the blood, are saved, for they were covered with the blood of the Passover lamb.. forgiven. They went down into the Red Sea and emerged on the farther shore.. and their journey through the wilderness dictated arrival at the entrance into Canaan. And all but two murmured against the Lord and all but two died on the journey and only two arrived in the promised land – with a rich inheritance. Their journey of trust or lack of trust in God dictated their future reward.

It was not at the start of their journey that God judged to be the Israelite’s failure. God brought them to the very brink of the Jordan, in a few short months. The next day the land to which they had been travelling would be theirs, but at the last moment, their faith gave way to doubt and they caved into their sight: there are giants in the land – we’ve no chance against such mighty foes, they cried, we’re like grasshoppers to them, they said.. no one can help us in this dire situation. We’ll be crushed by the enormity of the task that is set before us, they wailed. When the Israelites looked on the circumstances of life, their trust in God failed. The murmurings and faltering of the past days were not the issue.

Now was the time to enter the

I will ask the Father, and He will give you another Helper, that He may be with you forever; that is the Spirit of truth, Whom the world cannot receive, because it does not see Him or know Him, but you know Him because He abides with you and will be in you.
John 14:16-17

Jesus knew that His work on earth was almost finished and that in the near future He would leave His disciples to return to His Father’s throne in glory, in heavenly places. Jesus had been sent only to the lost sheep of the house of Israel to prepare them for the coming kingdom and much of His words, works, signs, and miracles were a witness to the Nation that He was indeed Israel’s Messiah, Who was promised by the Father.

But they rejected their King Messiah and said, we will not have this man rule over us. Luke 19:14.  And throughout the gospel, there are little glimpses where Jesus was seen preparing and training His disciples for the dispensation of Grace – the Church-Age. Jesus knew that the cross loomed and that the resurrection would follow. And He knew that the day was fast approaching when He would have to leave His trusting followers.

And so He comforted them with some precious words of comfort: Let not your hearts be troubled. You believe in God; believe also in Me John 14:1  He comforted them and promised them a wonderful future in His Father’s house. Jesus told them that He would go to the Father’s spacious, heavenly home where He’d promised to prepare a place for them – so that one day He would return and take them there to be with Himself.

He comforted them with the promise of the Holy Spirit – the heavenly Comforter. He pledged to ask the Father, to give them another Helper like Him, to be with them.. the Spirit of truth, Who was already with them but would one day live in them.