Yet in the same way these men, also by dreaming, defile the flesh, and reject authority, and revile angelic majesties. 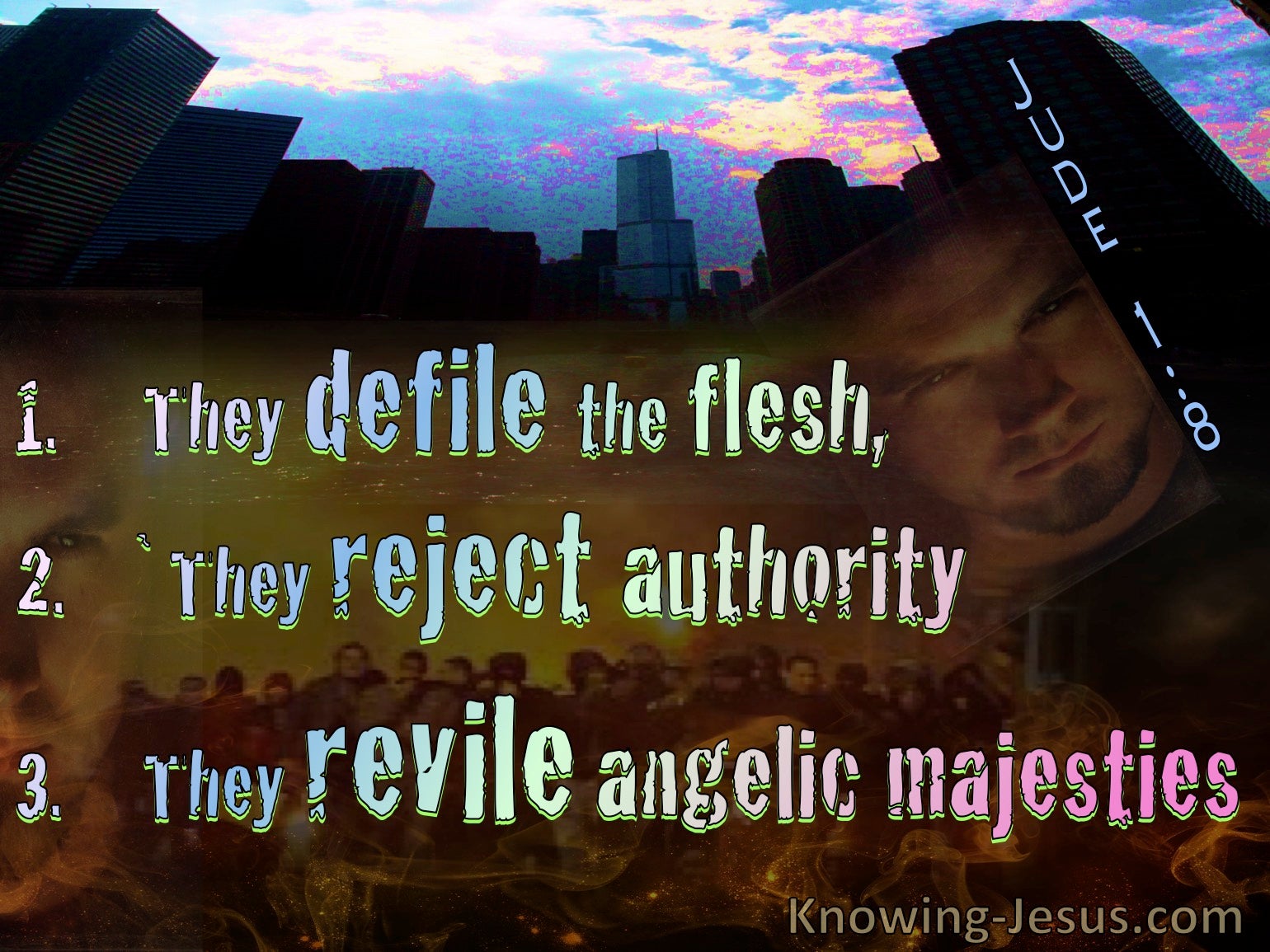 Jesus left the temple and was going away, when His disciples came to point out to Him the buildings of the temple. (Matthew 24:1 ESV)

How does that strike you? The disciples wanting to take the Lord Jesus on a sightseeing trip, and show Him the buildings of the temple! That is where their eyes are, that is what they are thinking to be important, that is their idea of impressiveness, importance, greatness and grandeur.... You know what follows through Matthew 24. We see that material and temporal things according to this world ideas and standards of greatness and even of the religious world standards, are the things which govern the mentality of these disciples after all this time. There is something there so deep-rooted, so inveterate, so persistent. We do not judge them, we are just like them. However spiritual we may think we are, the fact remains that we are tremendously influenced by temporal standards. It is a continuous battleground as to how things stand in this world before men, and even as to what the great religious leaders, and even evangelical leaders of our time regard as the important thing. It has a good deal of influence with us.

The Lord makes His pronouncement about that. The whole thing is going to be completely disintegrated. And it is on a mountain that He takes up this whole question, and you cannot get away from the fact however it may be chopped up by those who are interested in these things that at least the first part of this chapter relates to Jerusalem, and what comes out is that it is going to be broken up, shaken to its foundations and will totter to the ground. All that which they thought so great and so permanent is going. All that which they thought so established here will not have one stone left upon another. On the Mount He begins to show the disintegration of the one in order to make room for the other. On the Mount heaven touches earth and from there the heavenly dispensation is clearly in view.

Blameless and harmless, children of God without fault in the midst of a crooked and perverse generation, among whom you shine as lights in the world. § You are the salt of the earth … the light of the world. § Let your light so shine before men, that they may see your good works and glorify your Father in heaven.

I also withheld you from sinning against Me.

The Lord is faithful, who will establish you and guard you from the evil one. § I did not do so, because of the fear of God. § [He] gave Himself for our sins, that He might deliver us from this present evil age, according to the will of our God and Father. § Now to Him who is able to keep you from stumbling, and to present you faultless before the presence of His glory with exceeding joy, to God our Savior, who alone is wise, be glory and majesty, dominion and power, both now and forever. Amen.

Whoever trusts in the Lord shall be safe.

The Lord is exalted, for He dwells on high. § The Lord is high above all nations, His glory above the heavens … He raises the poor out of the dust, and lifts the needy out of the ash heap, that He may seat him with princes.

God, who is rich in mercy, because of His great love with which He loved us, even when we were dead in trespasses, made us alive together with Christ (by grace you have been saved), and raised us up together, and made us sit together in the heavenly places in Christ Jesus.

He who did not spare His own Son, but delivered Him up for us all, how shall He not with Him also freely give us all things? … For I am persuaded that neither death nor life, nor angels nor principalities nor powers, nor things present nor things to come, nor height nor depth, nor any other created thing, shall be able to separate us from the love of God which is in Christ Jesus our Lord.

Christ hath redeemed us from the curse of the law, being made a curse for us; for it is written, Cursed is everyone that hangeth on a tree" (Gal. 3:13).

The legal Christian considers the law to be his best friend who will enable him to live righteously. But in reality the law, in the hands of the Holy Spirit, is his beloved enemy. The Spirit's purpose is to bring the well-meaning believer down into defeat, wretched and ready to realize, "I thank God through Jesus Christ, our Lord" (Rom. 7:25).

"It is perhaps the most alarming symptom of decay to be seen amongst evangelical believers today, that so many have accepted (at any rate mentally) the fact that they cannot be justified before God except by the sacrifice for sin once made for all upon Calvary, proceed to build a new legal code by which to live, and seek to be sanctified by their own efforts and endeavors.

"The more conscientious, when faced with the failure of this scheme of things, become the victims of the condemnation of the accuser of the brethren'; and take their place among the great company of Christian men and women who are constantly beset with doubts and fears, and who, often in spite of intense activity in the cause of the Gospel, are living in the conscious bitterness of defeat." -J.C.M.

"The law cannot be broken or divided. It stands as a unit. To undertake any part of it is to be committed to it all. Nothing can be more unreasonable or more unscriptural than to borrow some portions from the law system, either that of Moses or of the millennial kingdom, and, at the same time, reject other portions. He who will choose the law must, to be consistent, do the whole law (Rom. 10:5), and if he should break it at one point, he is guilty of all (James 2:10)." -L.S.C.

Forever, O LORD, your Word is firmly fixed in the heavens.
Psalm 119:89

For I KNOW Whom I have believed, and am persuaded that He is able...
2Timothy 1:12

Sometimes it’s difficult to understand the reason why God acts as He does. Often it’s confusing – wondering why God doesn’t act as we think He ought! But the answers to all our questions have been forever settled in His Word. and the Psalmist tells us, Thy Word is eternal – it is settled in heaven Ps.119:89

Sometimes the Word of God gives us the answer to our heartfelt questions. Often we are left beneath a cloud of unknowing in matters we just can't figure out, but always His Word is established in heaven and we just trust Him – no matter what – and we discover like Habakkuk, Esther and others, that there is often concealment.

Habakkuk tells us of a hiding of His power – a veiling of His strength. Most often in this church age it appears that God’s hand is working secretly. We read that ‘the secret hand’ of God was strong against the Amalakite enemy  – in the Septuagint translation of the Scriptures.

And again Moses built an alter to the Lord and called it – The Lord is my Refuge, because with a secret hand the LORD fighteth against Amalek, from generation to generation Exodus.17:15. And we too are commanded to remain strong in the Lord and in His mighty power.

Moses is an example of a man that remained strong in the mighty strength of God –  and as Moses raised his rod of intercession before the Lord – God was mighty to save. When the arms of Moses wearied, Joshua and Hur supported him in his prayer. Moses’ arm of intercession was held up by two men of prayer – and God heard.

This epic example of the enemy’s attack on the people of Israel is a lesson for us. The enemy

Be Brave and Strong

Be strong in the Lord and in the power of His strength
Ephesians 6:10

Watch, stand fast in the faith, be brave, be strong.
1Corinthians 16:13

Jesus loved Mary and Martha dearly – so why would He delay their cry for help? Daniel was beloved of the Lord – so why did he have to wait for an answer? God was the friend of Abraham – so why the unendurable delayed promise? Four days or twenty-one days is difficult enough, when an answer is desperately sought, but Abraham had a 400 year delay for his descendant’s pledge to be redeemed! Each request was simple enough for God to carry out, so why the delay?

But lips that have pleaded in agony of heart for years do not go unnoticed. Eyes that wept tears of pleading, until numbness replaces hope do not go unheeded.. but still the questioning, why? pierces every doubting, hurting, waiting soul.. as hearts grow faint and weary and faith flickers dimly as God still delays. But God does not leave His children in bitterness of soul for lack of care or love. God has a deeper, wider, greater purpose than His hurting child can understand. Waiting may frustrate us and His silences may thunder in our pounding soul, but He desires to bestow over and above all that we can ask or think or imagine. If we could only comprehend His love, His mind and His reason for His delay!!

Never forget that there are always reasons for His apparent delay, if you can