But the word of the Lord endureth for ever. And this is the word which by the gospel is preached unto you. 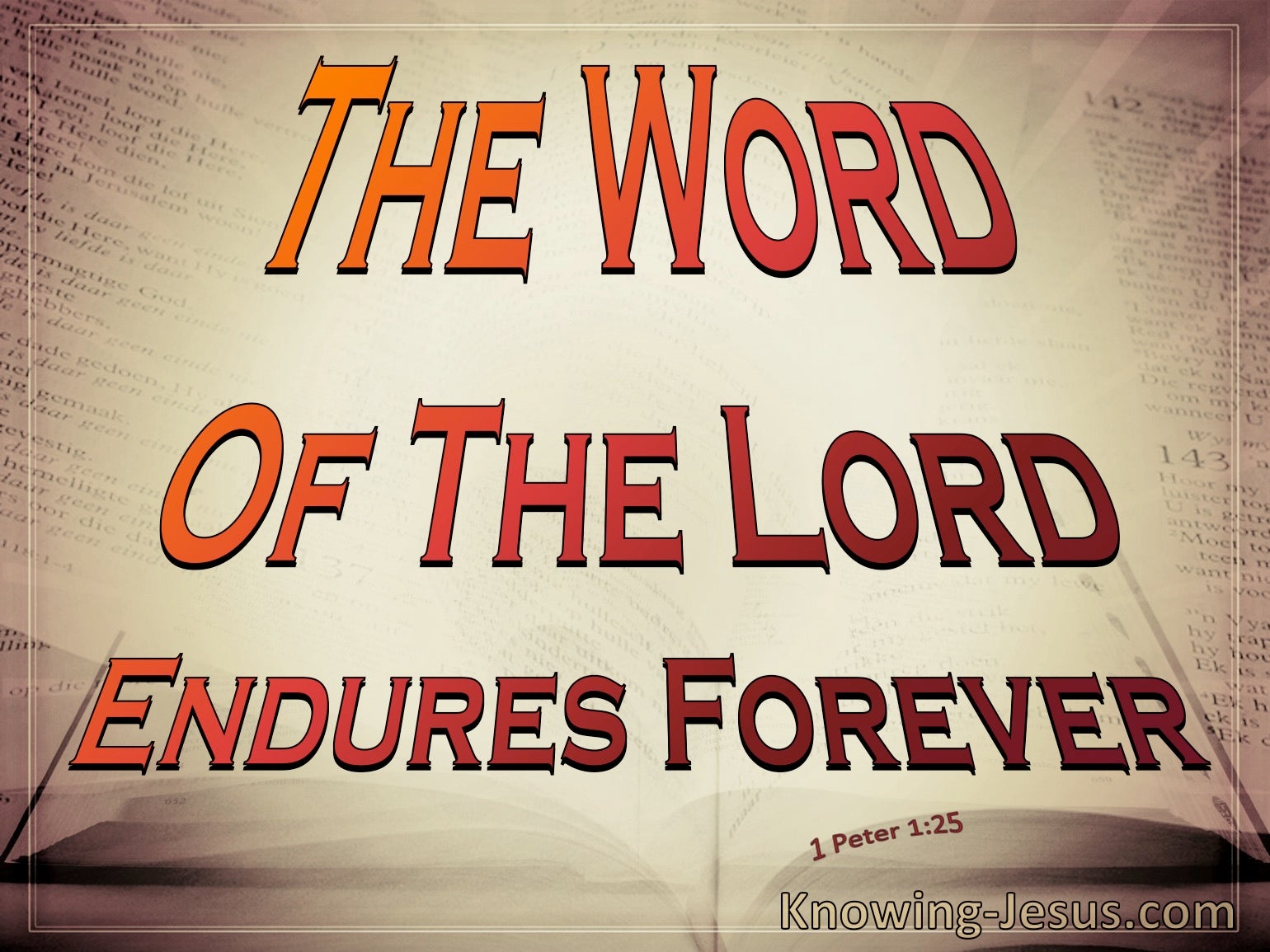 Love to the End

Jesus knew that the time had come for Him to leave this world and go to the Father. Having loved His own who were in the world, He now showed them the full extent of His love. (John 13:1 NIV)

No ministry of the servant of Jesus Christ can be a triumphant ministry unless there is a deep, strong, abiding love.... Love is going to solve our problems and to bring us into victory; but apart from a sufficient love, the problems of human make-up, the many differences of disposition and character and all that goes to make up a company, and the continuous drain and strain, with all the pressure that comes from the enemy, will present a problem, a perplexity and a paralyzing task....

We may ask, "How did the Lord manage to maintain the relationship with His disciples?" They were so difficult, so different, so disappointing. "Having loved His own... He loved them unto the end." That is the answer. Love got above all that they were; love gave the extra thing which enabled Him not to take them just as they were and end there. So in our relationships, the spirit of the true servant is only possible as there is a deep love. Upon all those who have ideas of serving the Lord and working for Him I would urge this consideration: that the work of the Lord is not some thing which you outwardly and objectively take up. It is (if it is the true thing) the outworking of love for the Lord and for those who are the objects of His love. That is very simple, but it goes to the heart of things. Sooner or later you and I will be brought to the position where the question will be, Have we sufficient love to go on? Can we find enough love in our hearts to get us through this particularly difficult situation? The situation will be constituted by all those factors which resolve us into servants, bondslaves. It would not have become so acute if only we had been esteemed and honored, and held in high regard. But when the situation is created by a great deal being expected of us, by demands being made upon our generosity, our kindness, calling for an almost inexhaustible fund of patience, and the letting go of personal feeling; when really the main issue in the crisis is this I am being imposed upon: too much is being expected of me: I am treated as a servant that is where we are found out. Love alone can support this service.

I, even I, am He who comforts you.

Blessed be the God and Father of our Lord Jesus Christ, the Father of mercies and God of all comfort, who comforts us in all our tribulation, that we may be able to comfort those who are in any trouble, with the comfort with which we ourselves are comforted by God. § As a father pities his children, so the Lord pities those who fear Him. For He knows our frame; He remembers that we are dust. § As one whom his mother comforts, so I will comfort you. § [Cast] all your care upon Him, for He cares for you.

You, O Lord, are a God full of compassion, and gracious, longsuffering and abundant in mercy and truth.

He will give you another Helper … the Spirit of truth. § The Spirit … helps in our weaknesses.

You were called into the fellowship of His Son.

He received from God the Father honor and glory when such a voice came to Him from the Excellent Glory: “This is My beloved Son, in whom I am well pleased.” § Behold what manner of love the Father has bestowed on us, that we should be called children of God!

Be imitators of God as dear children. § If children, then heirs—heirs of God and joint heirs with Christ.

The brightness of His glory and the express image of His person. § Let your light so shine before men, that they may see your good works and glorify your Father in heaven.

Jesus, the author and finisher of our faith, who for the joy that was set before Him endured the cross, despising the shame. § These things I speak in the world, that they may have My joy fulfilled in themselves. § As the sufferings of Christ abound in us, so our consolation also abounds through Christ.

There is as much error produced in failing to divide the Word at all, as there is in wrongly dividing it.

"Covenant Theology, at the utmost, is forgiveness of sins and divine favor enjoyed; and all that concerns their position in the Lord Jesus is ignored, or alas! guarded against as dangerous. Men are placed under the New Covenant which does not go beyond remission of sins and the law written in the heart. But being in Christ, and knowing it by the Holy Spirit, and what it involves now has dropped out of their creed altogether."

"Non-dispensational teachers have endeavored to bring over the many promises of the physical and material aspects of kingdom salvation into the present dispensation, giving hope of material prosperity and physical health, as well as political peace. Failure to realize these promised goals has caused many to lose faith and to become bitter toward God Himself. The failure, of course, is not of God, but of teachers who have refused to rightly divide the Word of Truth."

"Calvin attempted by discipline of Church and State to make everyone live like a Christian - as did the Puritans as a result. This effort resulted in the need to use the Old Testament rather than the New as an ethical guide."

"A workman that needeth not to be ashamed, rightly dividing the Word of truth" (2 Tim. 2:15b)

He was in the world and the world was made by Him but the world did not know Him – but as many as received Him to them He gave authority to become the sons of God.
John 1:10

If ever there was a passage that lifted up the person of Christ, it is the 1st chapter of the gospel of John, for he identifies Christ’s supremacy from many different angles. He lifts the veil on the Christ of God by elevating Him to the throne of the Most High.

He was in the world and the world was made by Him but the world did not know Him, but as many as received Him to them He gave authority to become the sons of God. The prophets of old were God’s instruments to unveil His eternal power and glory, but John gives the first glimpse of the great God among gods and Man among men.

His Deity is demanded, for there is no other good enough to pay the price of sin. His Manhood in mandatory, for no other Days-man could redeem His brethren. This is the God-man, Who clothed Himself in flesh – the perfect sacrifice for sin. As fully God – He is the everlasting Son of the Most High God –He is uncreated and without beginning – of one Being with the Father Almighty.

As fully Man – He was born as Jesus of Nazareth - the carpenter’s ‘Son. He started life

I in them and You in Me; that they may be made perfect in one and that the world may know that You have sent Me and have loved them as You have loved Me.”
John 17:23

We are the body of Christ, Who is the Head. What an unfathomable mystery. All who are in Christ are expected to live their lives as His life living in them. In the prayer He prayed just before Calvary, Christ prayed to the Father, "The glory You gave Me I have given them… that they may be one just as We are one". John 17:22

In this body, Christ has a counterpart that is to complement and complete Him! What is true of the Head is to be true of the body and we are the body of Christ! We are complete in Him, Who is the Head of all principality and power. The church of Christ has been born out of God and are sent out from God. Each have a spiritual revelation, which has come from the Father.

Christ spoke only what His Father said and we must only speak the words from Him. Christ did His earthly work through the Father and we must do our work through Him. Christ had a zeal for His Father’s house and kingdom and so must we who are His body. In the life we live, all things are out of God – all things come from Him. What a glorious mystery of grace. What mysterious grace and glory.