"I kept looking in the night visions, And behold, with the clouds of heaven One like a Son of Man was coming, And He came up to the Ancient of Days And was presented before Him. 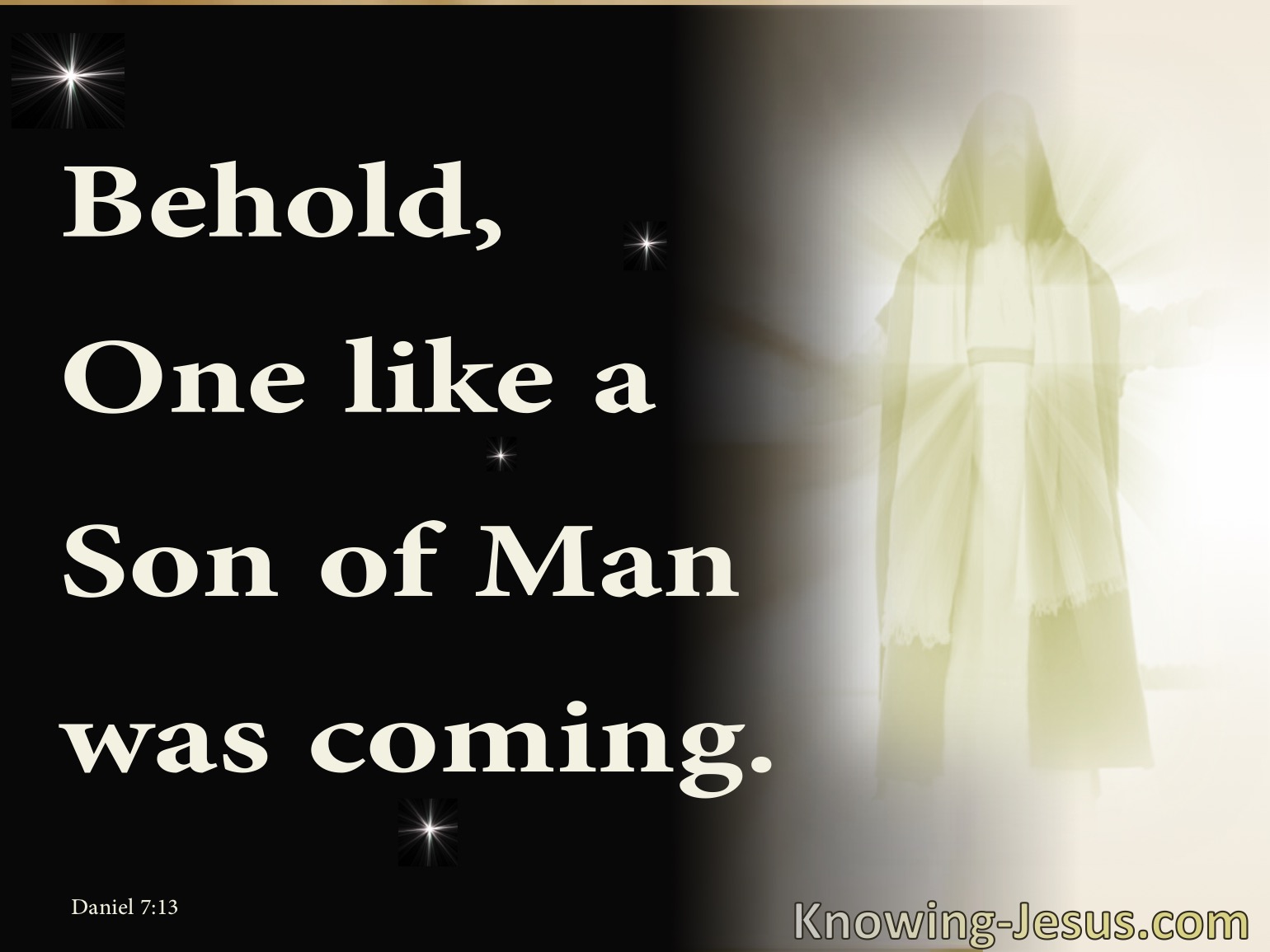 The leading priests and the teachers of religious law saw these wonderful miracles and heard even the children in the Temple shouting, "Praise God for the Son of David." But the leaders were indignant. (Matthew 21:15 NLT)

From the Mount of Olives He went, and in that meek and lowly way presented Himself as King. The fickle multitude, of course, jumped at earthly possibilities, and again the disciples are all in it. But when you get to Matthew 21:15, you get to the true situation in Israel among the Jews, and it will be found that even the fickle multitude will come to that presently when they discover that He did not mean a temporal, political kingdom at all. And when all that prospect seems to be more than doubtful, the crowd will join the ruler cry, way with Him!The real thing deep down behind is in verse 15: the positive antagonism towards Him; no desire to have Him, of course stimulated by envy and jealousy. The place where it was really drawn out as to what people wanted was the Mount of Olives....

Really their thoughts and His are very far apart, and that becomes very clear in the end. The Mount of Olives first of all gets down into the truth as to what people are after. You never know the truth about a situation. It may look all right, it may seem to be quite favorable, but in fact it may be all wrong, false, and untrue. You never know until you obtain the heavenly position of higher ground, and then from that higher ground you can see the truth about things. That works in principle; that works in history. If you present the high ground of God full thought for His people and the hearts of the people are really set upon having a work for God down here that is flourishing and prosperous and well-spoken of, you find that people are really, after all, only going with Him so long as He comes into line with their ideas and ambitions. But immediately that runs counter to thoughts more earthly, thoughts even in relation to Him, something deeper rises up. They are not going to have that. You have seen that many times; you must not touch their things. They say it is for the Lord, but you must not touch it; it is their own. If you are not coming to help their thing or things with your ministry or presentation, of course they won have it, and it resolves itself into this: they won have Him; that is not the kind of Lord they want. They want a Lord who is going to make their thing for Him successful down here. You can only know and discriminate between the true and the false when you yourself are on the higher ground.

You have been weighed in the balances, and found wanting.

The Lord is the God of knowledge; and by Him actions are weighed. § What is highly esteemed among men is an abomination in the sight of God. § The Lord does not see as man sees; for man looks at the outward appearance, but the Lord looks at the heart. § Do not be deceived, God is not mocked; for whatever a man sows, that he will also reap. For he who sows to his flesh will of the flesh reap corruption, but he who sows to the Spirit will of the Spirit reap everlasting life.

What profit is it to a man if he gains the whole world, and loses his own soul? Or what will a man give in exchange for his soul? § What things were gain to me, these I have counted loss for Christ.

Behold, You desire truth in the inward parts. § You have tested my heart; You have visited me in the night; You have tried me and have found nothing.

Unless a grain of wheat falls into the ground and dies, it remains alone; but if it dies, it produces much grain. § If the firstfruit is holy, the lump is also holy; and if the root is holy, so are the branches. § Now Christ is risen from the dead, and has become the firstfruits of those who have fallen asleep. § If we have been united together in the likeness of His death, certainly we also shall be in the likeness of His resurrection. § The Lord Jesus Christ … will transform our lowly body that it may be conformed to His glorious body, according to the working by which He is able even to subdue all things to Himself.

I am the resurrection and the life. He who believes in Me, though he may die, he shall live.

To him that worketh not, but believeth on Him that justifieth the ungodly, his faith is counted for righteousness" (Rom. 4:5).

There is no work involved in our receiving the Lord Jesus for life, and there should certainly be no self-effort involved in the manifestation of His life in and through us. The principle is the same, from re-birth to maturity.

˜Thanks be to God, who giveth us the victory through our Lord Jesus Christ' (1 Cor. 15:57). That is grace. That is the test of the real or the counterfeit. Just remember this: any victory over the power of any sin whatsoever that you have to get by working for it is counterfeit. Any victory that you have to get by trying for it is false. If you have to work for your freedom, it is not the real thing, it is not that which the Father offers you in His Son."

"The effortless life is not the will-less life. We use our will to believe, or receive, but not to exert effort in trying to accomplish what only the Father has done. Our hope for freedom from the power of sin is not Christ plus my efforts,' but Christ plus my receiving.' To receive victory from Him is to believe His Word that solely by grace He is, this moment, freeing us from the dominion of sin. And to believe on Him in this way is to recognize that He is doing for us what we can never do for ourselves." -C.G.T.

"The Father has left us as much dependent on the Lord Jesus' work for our deliverance as for our forgiveness. It is wholly because we died with Him on the Cross, but unto sin and unto the whole legal principle, that sin's power for those in Him is broken."

Behold, a virgin shall be with child, and shall bring forth a son, and they shall call HIS name Emmanuel, which being interpreted is, God with us.
Matthew 1:23

It was Matthew who delighted to quote fulfilled Messianic prophecies in His gospel. This former tax-collector thrilled to link the Lord Jesus Christ with prophecies of old. This disciple of the Lord Jesus trawled the Old writings and linked them with the New. This apostle of Christ, uncovered prophetic Scripture and secured them in his writings.

He rooted Christ’s genealogy to the patriarchs of old – to Abraham, Isaac and Jacob. He linked Christ’s Jewish lineage through the esteemed kingly line of the great king David. Much in his gospel demonstrated the legitimate Messiahship of Jesus – to Israel. Matthew took the prophecies of Old and certified their fulfilment in the New. He was a writer who saw what was hidden in the Old – and revealed it in his Gospel. As the old maxim goes: The new is in the old concealed. The old is in the new revealed.

Matthew's historical record showed the genuine, genealogical supremacy of Jesus Christ. He proved Christ’s legitimate claim to be Israel’s king – and proclaimed Him as God. He also gave many indications that this man Jesus was God Incarnate – God with us.

He wrote of Isaiah who cried out to Israel – the Lord Himself will give you a sign; Behold, a virgin shall conceive, and bear a son, and shall call His name Immanuel – Immanuel, which being interpreted is, God with us – God manifest in the flesh. John called Him the Word made flesh, while Mark writes of the beginnings of the good news about Jesus the Messiah, the Son of God – and Matthew calls Him Emmanuel.

Christ was not merely a man, chosen from the human race to play the part of Messiah. Nor was He a created Son of God, like the host of angelic beings or the race of man.

Then Jesus said, Father, forgive them; for they know not what they do.
Luke 23:34

They killed the One so long expected – crucifying Israel’s promised Messiah.. not knowing He bore their sins on His shoulders, so that they could be forgiven. And yet a precious pardon was prayed over every guilty party, Jew and Gentile alike. Forgiveness was God’s heart of love towards the perpetrators of this heinous crime.. for in Isaiah we read: He bore the sin of many and interceded for the transgressors. Isaiah 53:12

His intercession reached back to include all sin, beginning in the garden of Paradise – a pardon extending forward to pay for every mortal sin, including yours and mine. Only the wisdom of a holy God could have designed such an act of gracious mercy. Only the love of our precious Saviour could have implored such a powerful pardon – and His death purchased and procured God’s gracious forgiveness for us all.

His entire life was a march towards this final goal for He came to save His people. He came from His home in heaven, knowing that cruel crucifixion awaited Him. How staggering that His prayer was uttered as the nails were driven into His flesh: Father forgive them, for they know not what they do.

They knew in part what they did, for in every respect they knew He was innocent.. yet had they known the fuller consequences, Jesus would never have been crucified, for had they known it, they would not have crucified the Lord of glory.1 Corinthians 2:8  But the Lord Jesus had to die if we guilty sinners were to live. Had the Lord of glory not died our sins could not have been forgiven.

Perhaps this is the epitome of the goodness of God, Who turns all evil to good. God’s propitiatory sacrifice for sin was the product of history’s most heinous crime. The crucifixion of God’s Son, opened the floodgates of His gracious forgiveness – and His death paid for the full price of