He made Him who knew no sin to be sin on our behalf, so that we might become the righteousness of God in Him.
2Corinthians 5:21

We are not sinners because we sin. We sin because we are sinners. When I first heard this saying I pondered it, to get it deep in my heart. My pride wants to say I am a good person, but God sees me as I am – a sinner; born dead in trespasses and sins; born with an inherent sin nature; born in enmity with the Father; born in desperate need of a Saviour.

Adam, created in God’s image, was authorised to rule the earth righteously, for God breathed into him the breath of lives – a living body, soul, and spirit. Commissioned as the federal head of mankind, his was the responsibility. Together with Eve, he was created to rule under God’s righteous authority – and Adam walked in the garden and had sweet fellowship with his God and Lord. God’s Spirit and man’s spirit fellowshipping together – Spirit to spirit communion.

Adam was given one command and a freewill to choose to obey or elect to rebel. His beloved wife was deceived by the serpent – questioning the truth of God’s Word. But as the authorised leader under God’s authority, it was Adam’s responsibility – and Adam choose to join her in sin, and fellowship with his Lord was severed.

The federal head chose to sin, unaware of the eternal consequence of his choice, for the wages of sin is separation and so all his seed were condemned to damnation. Adam was created for fellowship with the Lord but sin separated his spirit from God. And such would have been the fate of all humanity if God had not designed salvation. His perfect, unblemished, sinless Lamb was slain from the foundation of the world.. so that Adam, and his fallen race, could be reunited in spirit with God – by faith..  faith in the Seed of the woman, not faith in any of the fallen progeny of Adam – salvation in the Son of Man.. not salvation by any other man or means or method.

We are not sinners because we sin – we sin because we are a race of sinners. But God ordained a new race, a new man, a new creation, a new federal head. God planned for a second Adam; an obedient man having Holy Spirit to human spirit communion. God decided a rescue strategy – to redeem Adam’s fallen race from all condemnation – but there was no man to stand in the gap for all have sinned and all fall short,

God alone is good, so God alone could save – but God is Spirit and man is flesh, and only a perfect Man could reach God on behalf of sinful, sin-infected man. Only a perfect Man would be sufficient to satisfy God’s righteous requirement. Only a sinless sacrifice, willing to die for His people, could pay the price for sin. So God took on human flesh so man could be clothed in God’s righteousness. He made Him, who knew no sin, to be sin on our behalf – so that we might become the righteousness of God in Him. 2Cor5:21

God made the Lord Jesus Christ, Who was the second person of the eternal Trinity, to come in the likeness of human flesh, through the pure Seed of the fallen woman. God, Who alone is righteous became the only righteous man that ever lived, for the rest of humanity are sinful, sin-infected people. He alone was the only One Who could pay the price for sinful, sin-infected man and the many sins that each sinful man committed. And so the One who knew no sin – the One Who did not sin, HE BECAME SIN on our behalf, and the wrath of God was poured out on Him in full measure – upon that sinless God-Man, so that we might become the righteousness of God in Him. 2Cor.5:21 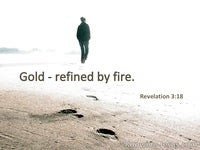