Knowing this, that our old man has been crucified with Him in order that the body of SIN might be annulled, that we may no longer serve sin as slaves.
Romans 6:6

There is too little emphasis and understanding on the difference between SINS and SIN. Both are fundamental problems in the life of a believer, but there is a solution to both. It is vital that we come to an understanding of the difference between SINS and SIN. SINS are individual transgressions carried out against God, in thought, word or deed. SIN or the SIN NATURE is an inherited power within that causes us to sin against God. We require forgiveness FOR our sins. We require deliverance FROM our sin, but both forgiveness and deliverance are found in the cross of Christ.

In 1 Corinthians we read that Christ died for our SINS – He paid the price for our sins. Every transgression in action or attitude are sins for which Christ died on the cross. Every sin we ever commit falls into the category of SINS – sins that we have committed. Transgression in thought, word, or deed are sins against God, and need forgiveness.

Sins are wrong actions we carry out. Sins are ungodly attitudes that mar our witness. When believers sin we should immediately confess that particular sin to the Father – and God is faithful and just to forgive our sins and cleanse us from unrighteousness. In 1 John 1:7 we read that the blood of Jesus Christ, His Son, cleanses us from all sin. Every sin we carry out is a violation against God – and it needs to be confessed. If we confess the wrong things we have done to God, He promises to forgive us.

An inherited sin nature is imputed sin; 'the old man'. which is passed to all humanity, but God in His love and grace has provided a solution for the old sin nature, in Adam – and the solution is to be taken out of Adam and placed into Christ – by faith: for as by the one man’s disobedience (Adam) the many were made sinners, so by the one man’s obedience (Christ) the many will be made righteous. Romans 5:19,

The remedy that God has provided for SIN is deliverance through crucifixion.  The old sin nature is cut off at the place of death – as we remain 'in Christ'. The problem,  principle, and power of sin is also dealt with at the cross: knowing this, that our old man has been crucified with Christ in order that the body of SIN might be annulled, that we may no longer serve sin as slaves Romans 6:6

When Christ died on the cross, we were 'in Him' – and our old self was also crucified. Our sinful self was crucified with Christ, so sin lost its controlling power in our lives. Christ gained power over sin and death in our lives, when He died and rose again, because we are new creatures in Christ we are no longer in slavery to sin.

The problem,  principle, and power of sin in our lives, was dealt with at the cross.  Because we were crucified with Christ, we are set free from sin’s vice-like power. We require forgiveness for our SINS – and it is PAID IN FULL. We require deliverance from our SIN – and it is PAID IN FULL. Both forgiveness and deliverance is found in the cross of Christ.

By Grace Through Faith

The Foundation of Truth
Isaiah 62:4 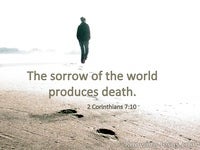