The law will break you; grace will make you.

"Nothing can be more sure than the steps of one guided by the Spirit of God and the Word of God, and yet nothing more complicated than to have to walk in separation' from all that exists around. It is indeed difficult to have to wind one's way through things so perplexing and so complex as the religious systems of our own day. We have to avoid on one hand organizations formed in imitation of things past (Israel-law), and on the other systems more characterized by anticipation of  future things (Kingdom-law). We have to allow that such things were once given by God, and that they will yet again be introduced by Him; while invariably contending that they are positively opposed to His present working by the Holy Spirit sent down from heaven." -J.L.H.

"With many Christians, it may be almost thought that the Lord Jesus was but the introduction to Moses. That His death procured the payment of sin's debt, so that the debt being paid, the believer might be in a position to keep the law, and that, accordingly, the law, and not the Spirit of life in Christ Jesus,' might be the believer's rule of life." -H.F.W.

"The walk of the believer should ever be the natural result of realized privilege, and not the constrained result of legal vows and resolutions - the proper fruit of a position known and enjoyed by faith, and not the result of one's own efforts to reach a position by works of law.' All true believers are a part of the Bride of Christ; hence, they owe Him those affections which become that relation. The relationship is not obtained because of the affections, but the affections flow out of the relationship." -C.H.M. 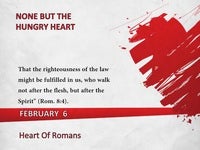 Heart Of Romans
Have You Considered Job’s Friends? (JOB-study 16)
Journey into Faith