The Hope of Glory

Through Him, the world was spoken into being, and by Him, the universe is sustained. Through His death sin was conquered and by His resurrection death was vanquished. Through His Spirit, we are a new creation and by His grace, we have abundance of life.

His titles are as numerous as the stars and His designations are eternally glorious. His attributes are without measure and His unchanging character is faithful and true. His name is wonderful; He is altogether lovely; He is my beloved, and He is our saviour – and to know Jesus as saviour is the only thing worth knowing in time and into eternity.

The person of Christ is in history pre-eminent and His work on the cross is finished. From the genesis of the world to His final revelation the supremacy of Christ is central. From eternity past to the ages to come the centrality of the Lord Jesus is predominant. To know Christ as our Saviour is the single and most important component of life.

The mind of the Godhead and father-heart of God planned a mighty mystery. In the eternal council chambers of heaven, a divine secret was planned and purposed, and proceeding from God’s cherished mystery was born the eternal plan of God – a special plan, hid in His heart – that in the ages to come, Christ would be all in all.

And so in the fullness of time, God sent forth His Son to carry out His heavenly plan. And by revelation of the Spirit, to His apostle Paul, He unveiled His hidden mystery.. that Christ Jesus the only begotten Son of His love was to be born of woman… born under the Law to redeem those under the Law, so that we might receive adoption as sons. Galatians 4:5

The length and breadth and height and depth of God’s revelation is found in Christ. All God purposed and all that He planned is encompassed in the person of His Son – and God’s Son is the image of the invisible God. He is firstborn over all creation. For in Him all things were created: things in heaven and on earth, visible and invisible, whether thrones or powers or rulers or authorities; all things have been created through Him and for Him. He is before all things, and in Him, all things hold together.

Nothing should deflect our hearts from this magnificent truth – God’s open secret. All things emanate from Him and all things conclude in Him – the Alpha and Omega. All things hold together in Him and by Him, all things live and move and have being.. and we are part of Him for we are His body, His children, His sons, His bride – and He is the Head of the body, the Church; He is the beginning and the firstborn from among the dead, so that in everything He might have the supremacy.  Colossians 1:15-17

To know Christ as Saviour is to know Him as Son of God and Son of Man. To know Jesus as saviour is the only thing worth knowing in time and into eternity. He is pre-eminent in history and His work on the cross is finished. From eternity past to the ages to come the centrality of Jesus is predominant. To know Christ as Saviour is the single most significant component of life – Christ in you the hope of glory. 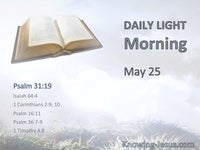 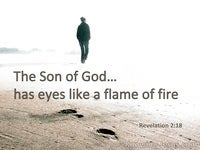 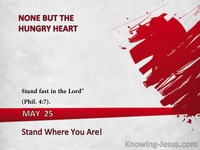 Stand Where You Are!
The Carnal Man - Man’s Nature and Destiny (17)
This One Thing