The LORD has sought for Himself a man after His own heart”
1Samuel 13:14

God is seeking a man; a corporate body; a race; a peculiar people – a new creation. God is seeking a man after His own heart.. a man made in His image and likeness. God wants a man to communicate His thoughts and character to a dying world in sin: and God made man in His own image to have dominion and to rule His earth Genesis 1:26. – but from the get-go, man failed the simple test of loving obedience to his Creator.. so Christ was sent to be that Man after God’s own heart – walking in loving obedience.

The Incarnate Lord, was sent from heaven – to become God’s pattern, for humanity. Christ was sent by the Father to show how a man after God’s own heart should live. His life was lived in spirit and truth – submitted to the Father, in loving obedience. He was the example- the life-pattern for all who would become God’s children, by faith – they were not to copy what He did, but to live they way He lived – in submission to God.

And God’s children became that new man in Christ; a corporate man; a race; a creation. God’s children became the Church, the new creation, which is His body - "the Church, the fullness of Him” Ephesians 1:23.  For 2000 years the church of Christ has been quietly growing into a corporate body, and God is bringing that new creation in Christ into His planned fullness: till we all come in the unity of the faith, and of the knowledge of the Son of God, unto a perfect man, unto the measure of the stature of the fulness of Christ: Ephesians 4:13.

The thoughts God thinks are good thoughts – the very essence of His moral beauty. The desires of God’s heart reflect the substance of His righteousness and truth. The will of God translates into His noble qualities of love, grace, justice, and peace. And such are the qualities that God seeks in the man after His own heart.

It is into the body of Christ - the Church, that God seeks to embody His noble attributes, and so into that body of believers the Holy Spirit of God took up permanent residence.. so that like Christ, their living example, they should learn to walk in spirit and in truth : a new race; a corporate man : a new creation – reflecting His godly nature.

And what is the result? It is not a man who becomes the personification of God….not deity, never. But a man that entirely reflects God’s moral nature – to God’s own satisfaction. A corporate man after God’s own heart – walking in loving obedience… A body, communicating His perfect character to a dying world in sin. And the goal of that corporate body is, “Christ in you - the hope of glory.”

Our Inheritance in Christ
Psalm 119:25 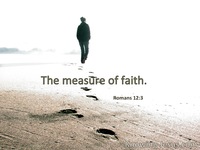 Romans 12:3
Disciple All Nations
Do You Walk In White?
A Modern Day Appointed Place (Woman At The Well (2)
Be Thou Faithful