For every house is built by someone, but the builder of all things is God. 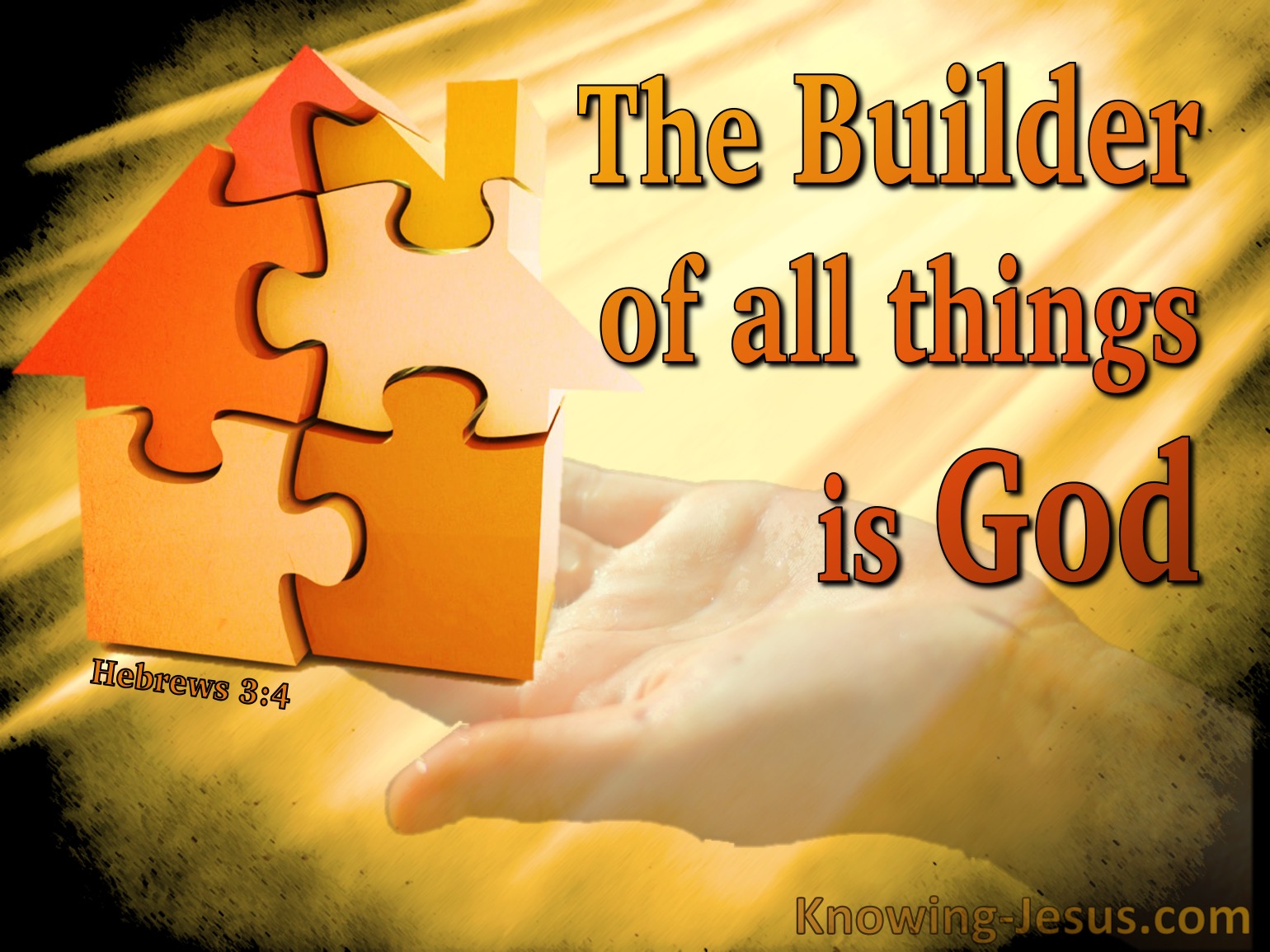 The Spirit of Fellowship

If you have any encouragement from being united with Christ, if any comfort from His love, if any fellowship with the Spirit, if any tenderness and compassion, then make my joy complete by being like-minded, having the same love, being one in spirit and purpose. (Philippians 2:1,2 NIV)

The fellowship of the Spirit is the spirit of fellowship: but, again, it is positive. Fellowship is not a passive thing: it never can be a passive thing, because all the hosts of hell are out against it. If there is one thing that hell is against, it is the fellowship of the Holy Spirit, the fellowship of the people of God. Unceasingly, by any and every means, those evil powers will seek to destroy that fellowship, because that fellowship spells their final undoing. Therefore fellowship can never be a neutral, passive kind of thing. You have got to fight for it, you have got to stand for it, you have got to be positive about this. Let some rift go on, and just see the havoc that delay over putting that right will work! If you have the Spirit - and of course I am addressing those who are supposed to have the Spirit - you should know that, if you are out of joint with another member of the Body of Christ to which you belong, it is, as it is with a dislocation in the natural physical body: there is an ache, a perpetual ache....

By that inflammation and ache the Holy Spirit is giving a positive witness against this thing. But if you go on long enough, the Holy Spirit will withdraw and leave you to it, just because He is positive. He will not brook persistent negatives on these things; He just will not have it. He is going on and saying: "All right, if you are determined to stay there, you can do so. I am going on." And there arises a very, very serious situation. That is, of course, grim and terrible. But it all gathers round this truth that the Holy Spirit is positive on the matter of fellowship.... We must challenge our hearts about this. The Holy Spirit, normally, is always positive - I could almost say aggressively positive. He is never negative, He is never neutral. If He has to pause, it means that He is waiting for something; for it is not His nature to do that - He would go on. May the Lord fill us with the mighty energy of His Spirit!

I know that You can do everything. § The things which are impossible with men are possible with God. § He does according to His will in the army of heaven and among the inhabitants of the earth. No one can restrain His hand or say to Him, “What have You done?” § There is no one who can deliver out of My hand; I work, and who will reverse it? § Abba, Father, all things are possible for You.

“Do you believe that I am able to do this?” They said to Him, “Yes, Lord.” Then He touched their eyes, saying, “According to your faith let it be to you.” § “Lord, if You are willing, You can make me clean.” Then Jesus put out His hand and touched him, saying, “I am willing; be cleansed.” § Mighty God. § All authority has been given to Me in heaven and on earth.

Some trust in chariots, and some in horses; but we will remember the name of the Lord our God. § Be strong and courageous; do not be afraid nor dismayed … for there are more with us than with him.

What is the word that the Lord spoke to you?

He has shown you, O man, what is good; and what does the Lord require of you but to do justly, to love mercy, and to walk humbly with your God? § And to keep the commandments of the Lord and His statutes which I command you today for your good?

As many as are of the works of the law are under the curse; for it is written, “Cursed is everyone who does not continue in all things which are written in the book of the law, to do them.” But that no one is justified by the law in the sight of God is evident, for “the just shall live by faith.” … What purpose then does the law serve? It was added because of transgressions, till the Seed should come to whom the promise was made.

God, who at various times and in different ways spoke in time past to the fathers by the prophets, has in these last days spoken to us by His Son.

Speak, Lord, for Your servant hears.

"We are more disposed to be occupied in telling the Father what we are in ourselves, than to allow Him to tell us what we are in the Lord Jesus Christ. So often the believer is more taken up with his own self-consciousness than with the Father's scriptural revelation of Himself. His revelation is one thing; my self-consciousness is quite another "

"It gladdens the heart to hear the new convert speak of the blessings he has received, and of his new-found joy in those blessings; but we can often see very distinctly that he is wrapping all these benefits of grace round himself, and we feel pretty sure that he will have to learn some lessons presently that will take the shine out of him. He will have to learn what a poor wretched thing he is, as in the flesh, that his heart may be transferred to a new center altogether.

"Nothing can be more distasteful to a spiritual mind than to hear people professedly giving a Christian testimony which begins and ends with themselves. It is for the effectual displacement of all this, and to transfer the heart to an entirely new center, that the revelation of the old man is divinely necessary for our souls. The Father has to come in and detach us from that which is our natural center, that He may link our affections with another Person - even with the glorified Lord Jesus Christ - and make Him everything to our hearts, so that our association with Him may be known, and may become the deep, abiding joy of our souls." -C.A.C.

"Worthy is the Lamb that was slain to receive power and riches, and wisdom, and strength, and honor and glory, and blessing" (Rev. 5:12).

The Bent Of Regeneration

If Jesus Christ is to regenerate me, what is the problem He is up against? I have a heredity I had no say in; I am not holy, nor likely to be; and if all Jesus Christ can do is to tell me I must he holy, His teaching plants despair. But if Jesus Christ is a Regenerator, One Who can put into me His own heredity of holiness, then I begin to see what He is driving at when He says that I have to be holy. Redemption means that Jesus Christ can put into any man the hereditary disposition that was in Himself, and all the standards He gives are based on that disposition: His teaching is for the life He puts in. The moral transaction on my part is agreement with God's verdict on sin in the Cross of Jesus Christ.

The New Testament teaching about regeneration is that when a man is struck by a sense of need, God will put the Holy Spirit into his spirit, and his personal spirit will be energized by the Spirit of the Son of God, "until Christ be formed in you." The moral miracle of Redemption is that God can put into me a new disposition whereby I can live a totally new life. When I reach the frontier of need and know my limitations, Jesus says - "Blessed are you." But I have to get there. God cannot put into me, a responsible moral being, the disposition that was in Jesus Christ unless I am conscious that I need it.

Christ was the sinless, spotless Lamb of God – undefiled and separated from sinners. He did not sin. He knew no sin. He was without sin. He was the sinless Son of God. Jesus paid the price for sin and He broke the power of sin when He died on the cross. John the Baptist was calling Israelites to repent of their sins because their Messiah-King was moving in and out among them, for the kingdom of God was very near. Oh, Israel believed in God; they believed that a Saviour was going to come and rescue them – and John was pointing them to the One, identified to him – as their Messiah.

They were not without a God like the pagan gentiles. They had a great hope in their coming Saviour. They believed in God – but now they must believe in the Lord Jesus. They had been disobedient children, but now they must turn from their sin to Christ. John gave this testimony: “I saw the Holy Spirit descending like a dove from heaven and resting upon Him. I didn’t know He was the One, but when God sent me to baptise with water, He told me, ‘The One on Whom you see the Spirit descend and rest is the One who will baptise with the Holy Spirit” – “Behold the Lamb of God….”

Imagine John’s dismay when He saw the sinless Son of God on Whom the Spirit was to rest coming to him to be baptised in water.  “I need to be baptised by You,” he protested.  But God always has His reasons and all that Christ did was under the guidance of the Spirit of God and in

There are numerous establishments and foundations that are labelled ‘Christian’: -Christian civilization; Christian denomination; Christian charity; Christian aid. There are a multitude of areas that are associated with the Christian ticket: -Philanthropy; hospitality; reform; education; religion and relief to name but a few. There are plenty of things that are being constructed in the name of the Lord, and all such by-products of Christian ‘enlightenment’ are of great benefit to the world.

The Church is not built by man nor is it confined in fine buildings. Christ said:- I will build my Church and the gates of hell shall not prevail against it” Matthew 16:18. The Church is not a worthy organisation of fine fellows and charitable ladies. The Church is part of Christ Himself, an extension of our Lord – His body. The Church is not an organisation but rather it is a living organism. "Behold I show you a mystery… we are all members of His flesh and bones” Ephesians 5:30 – and Christ is the Head of the church.

If a ministry is dependent on the name of its leader it is doomed to fail. If Christ is replaced by a man, woman or denomination, a death knoll has sounded, "for other foundation can no man lay than that is laid, which is Jesus Christ” 1Corinthians 3:11

Christ is not a theology, nor a doctrine. Christ is not a mere historical fact. He is the Lord of eternity; the Creator of the universe. He is God made Man. He is revealed within His cross; death; resurrection; ascension; glorification: We need to realise that there is a Man in heaven sitting on the throne of God, and that man is Christ Jesus the