But I rejoiced in the Lord greatly, that now at last you have revived your concern for me; indeed, you were concerned before, but you lacked opportunity. 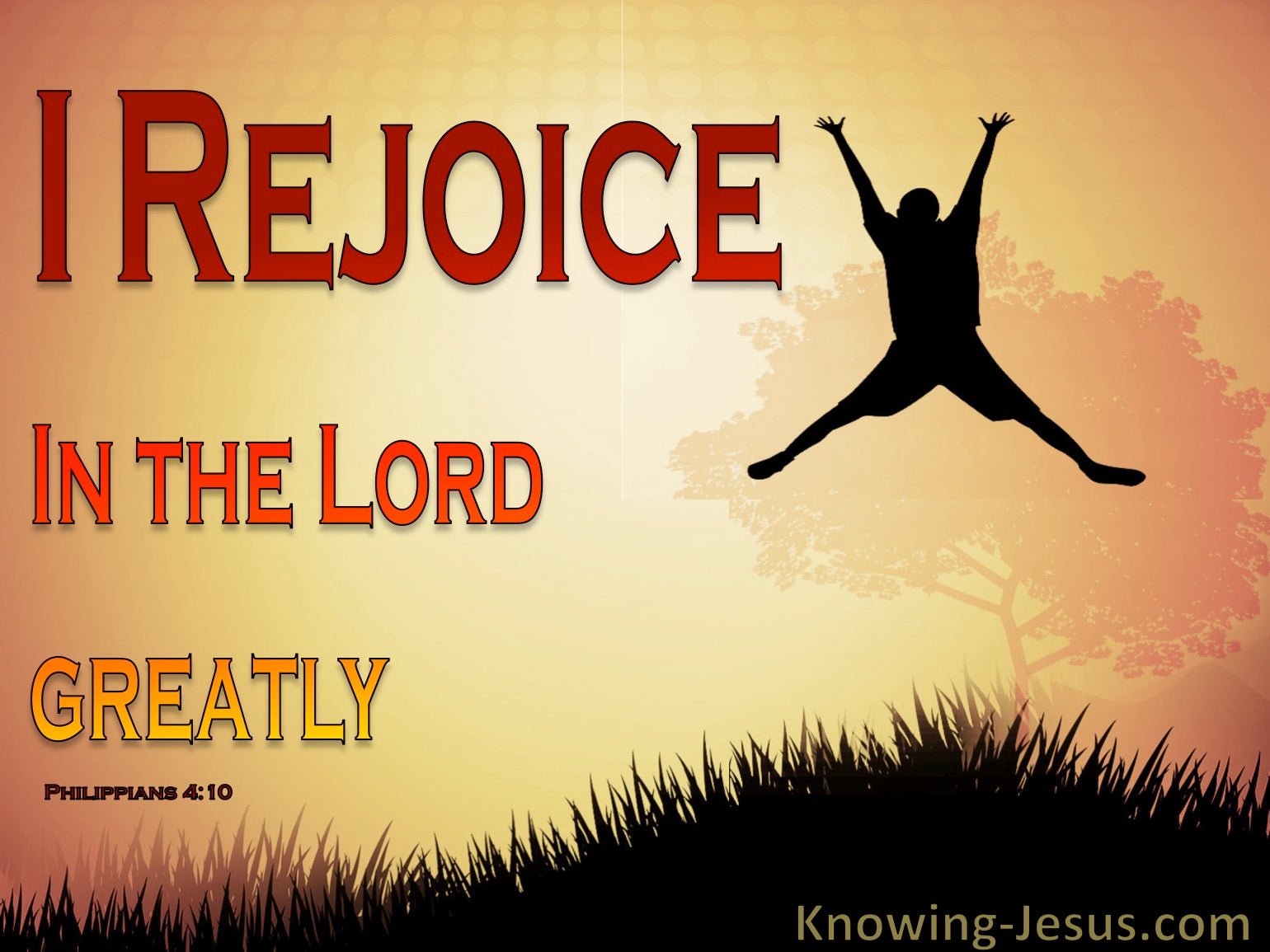 The Divine Order of Spiritual Fellowship

Though we are many, we all eat from one loaf of bread, showing that we are one body. (1 Corinthians 10:17 NLT)

We do feed upon Christ in prayer. To put that in another way, there is an imparting of Himself to His Own in prayer. We may go to prayer in weariness, and rise in freshness; we may go to prayer exhausted, and rise renewed. Is it that we have simply uttered some form of prayer, prayed some prayer? We know quite well if that is so we do not get up very much invigorated. Formal praying does not bring very much life. Going through a form of prayers sometimes only ministers death. But really seeking the Lord, reaching out, taking hold of the Lord, giving ourselves up to the Lord in prayer, never fails to have renewing, uplifting, strengthening results. You say prayer may wear you out? Yes, but there is a wonderful strength that comes by wearing out prayer. There is vitality given to the spiritual life even in prayer that tires us physically, and we go in the strength of it. Yes, prayer is a way in which Christ is ministered to us by the Holy Spirit. Prayer is a way in which we feed upon Christ; He becomes our Life....

We feed upon the Lord, and He becomes our Life when we recognize the Divine order of spiritual fellowship. That is a Divine order. You have it brought in with Acts: "And they continued steadfastly in the apostles' teaching and fellowship, in the breaking of bread and in prayers." There is a tremendous means of grace, a tremendous enrichment of Christ in the fellowship of the Lord's people. I believe the enemy will get believers, when they are together, to talk about anything under the sun rather than about the Lord. It is easy when you meet together with the Lord's people to be carried off with all kinds of matters of interest, and not to begin to talk about the Lord; but if you do there is always an enrichment, always a strengthening, always a building up; it is the Divine way. Fellowship is a means of imparting Christ to the believer. And wherever spiritual fellowship is possible, you and I ought to seek it, look after it, and cherish it. There are all too many of the Lord's children today, who have no chance of spiritual fellowship, and who would give anything to have it. The Lord would have us at least two together. That is His order, and there is something in ministering Christ to one another. There will be something lost unless that is so. These are ways in which we feed upon the Lord.

The humble He teaches His way.

Blessed are the meek.

I returned and saw under the sun that—the race is not to the swift, nor the battle to the strong, nor bread to the wise, nor riches to men of understanding, nor favor to men of skill. § A man’s heart plans his way, but the Lord directs his steps.

O our God, will You not judge them? For we have no power against this great multitude that is coming against us; nor do we know what to do, but our eyes are upon You. § If any of you lacks wisdom, let him ask of God, who gives to all liberally and without reproach, and it will be given to him. § When He, the Spirit of truth, has come, He will guide you into all truth.

O Lord God . . . with Your blessing let the house of Your servant be blessed forever.

You have blessed it, O Lord, and it shall be blessed forever. § The blessing of the Lord makes one rich, and He adds no sorrow with it.

Remember the words of the Lord Jesus, that He said, “It is more blessed to give than to receive.” § When you give a feast, invite the poor, the maimed, the lame, the blind. And you will be blessed, because they cannot repay you; for you shall be repaid at the resurrection of the just. § Come, you blessed of My Father, inherit the kingdom prepared for you from the foundation of the world: for I was hungry and you gave Me food; I was thirsty and you gave Me drink; I was a stranger and you took Me in; I was naked and you clothed Me; I was sick and you visited Me; I was in prison and you came to Me.

Blessed is he who considers the poor; the Lord will deliver him in time of trouble. § The Lord God is a sun and shield.

Me, Myself, And I

While both are essential, it is far more difficult to get to know the old man than it is to know the Lord Jesus. Many who know something of Him, know little or nothing of themselves.

"There is not a more difficult lesson in the Christian life than to come to a true knowledge of what the flesh is. Its terrible power, its secret and universal rule, and the blinding it exerts in keeping us from the knowledge of what it is, are the cause of all our sin and evil. Hence it comes that so few really believe in their absolute inability to obey God or to believe in His love. And there is nothing that can deliver us from it but that entire willingness to die to the old man, which comes when by faith we understand that we have died in Christ Jesus." -A.M.

"It seems that God's Spirit has to take every growing believer through a drastic process of self-exposure. That fleshly principle lurking within has to be looked in the face. Its presumptuous claim to be a sufficient source of wisdom and ability has to be exposed in its big lie. Its save-yourself attitude has to be recognized and rejected. And such knowledge can only come through failure, humiliation and despair." -N.G.

"If you come to feel, through ever-recurring misery and defeat, that unless Another shall lead you into the land of fruitful obedience your whole Christian career will be a spiritual and moral chaos, then perhaps you are ready to venture your all upon your union with the Lord Jesus in His death and resurrection."

"There is no joy like that of realizing our nothingness, while at the same time reposing upon the Father's all-sufficiency."

“For He hath made Him to be sin for us, who knew no sin; that we might be made the righteousness of God in Him.” 2 Corinthians 5:21

Sin is a fundamental relationship; it is not wrong doing, it is wrong being, deliberate and emphatic independence of God. The Christian religion bases everything on the positive, radical nature of sin. Other religions deal with sins; the Bible alone deals with sin. The first thing Jesus Christ faced in men was the heredity of sin, and it is because we have ignored this in our presentation of the Gospel that the message of the Gospel has lost its sting and its blasting power.

The revelation of the Bible is not that Jesus Christ took upon Himself our fleshly sins, but that He took upon Himself the heredity of sin which no man can touch. God made His own Son to be sin that He might make the sinner a saint. All through the Bible it is revealed that Our Lord bore the sin of the world by identification, not by sympathy. He deliberately took upon His own shoulders, and bore in His own Person, the whole massed sin of the human race - "He hath made Him to be sin for us, who knew no sin," and by so doing He put the whole human race on the basis of Redemption. Jesus Christ rehabilitated the human race; He put it back to where God designed it to be, and anyone can enter into union with God on the ground of what Our Lord has done on the Cross.

A man cannot redeem himself; Redemption is God's "bit," it is absolutely finished and complete; its reference to individual men is a question of their individual action. A distinction must always be made between the revelation of Redemption and the conscious experience of salvation in a man's life.

On that day, this gospel of the kingdom will be preached in the whole world as a testimony to all nations, and then the end will come.
Matthew 24:14

The rugged figure of John the Baptist shouting, “Repent – the kingdom is near,” must have been a curious sight to all who witnessed his abrupt entrance onto the scene. His rough-and-ready appearance must have offered a stark contrast to the meticulous dress and scrupulous appearance of the fastidious priests and flawless Pharisees. They were learned men who tithed their herbs and spices with painstaking precision. They kept to the letter of the Law with unparalleled zeal – could recite the Torah with eloquent accuracy – were perfectly groomed in every detail of their model behaviour.

John the Baptist’s call for repentance was a particular call to a particular group of people at a particular time and for a particular purpose – he was calling for national Israel to turn away from their proud, hypocritical, fleshly, religious ways, back to the God of Israel – because the time of God’s promised Messiah had arrived. John had been chosen as the appointed herald of the Jewish Messiah.. Israel’s King, Who would welcome everyone who turned round from their sin – into His kingdom.

The common people were ready to welcome the King into their lives, but their religious leaders were protective of the outward trappings of a religious system that they themselves had built up.. an organisation which had grown into a monster that barely resembled the faith in God, that was displayed by their forefather, Abraham.

For 400 years the iron gate of heaven was shut tight, for the sound of the prophet’s voice had been silenced, as God waited for His people Israel, to turn back to Himself, but with every passing day the yoke of oppression became unbearable, as burdensome religious rites and the traditions of men were piled onto the backs of Jewish people.

This was the domestic scene in the streets of Jerusalem when

As the Father hath loved me, so have I loved you: continue ye in my love.
John 15:9

Let not your heart be troubled
John 14:1

He knew that in this world they would have tribulations and disappointments. He knew the difficulties, the sadness, the pain, the trials they all had to face. He knew there was one way and one way alone that they could overcome – Abide in Me – Remain in Me – Keep your heart fixed unrelentingly on Me.

Abiding in Him is even deeper than rest - t is a decision of the heart. It is a consciousness of resting in Him and of Him living through us. It is enjoining with Him – at the very sphere, center and circumference of life.

And down through the past twenty centuries, His words have comforted many. Down through the church age, abiding in Him has been the Christians’ hope. Rest in Me. Abide in