And now says the LORD, who formed Me from the womb to be His Servant, To bring Jacob back to Him, so that Israel might be gathered to Him (For I am honored in the sight of the LORD, And My God is My strength), 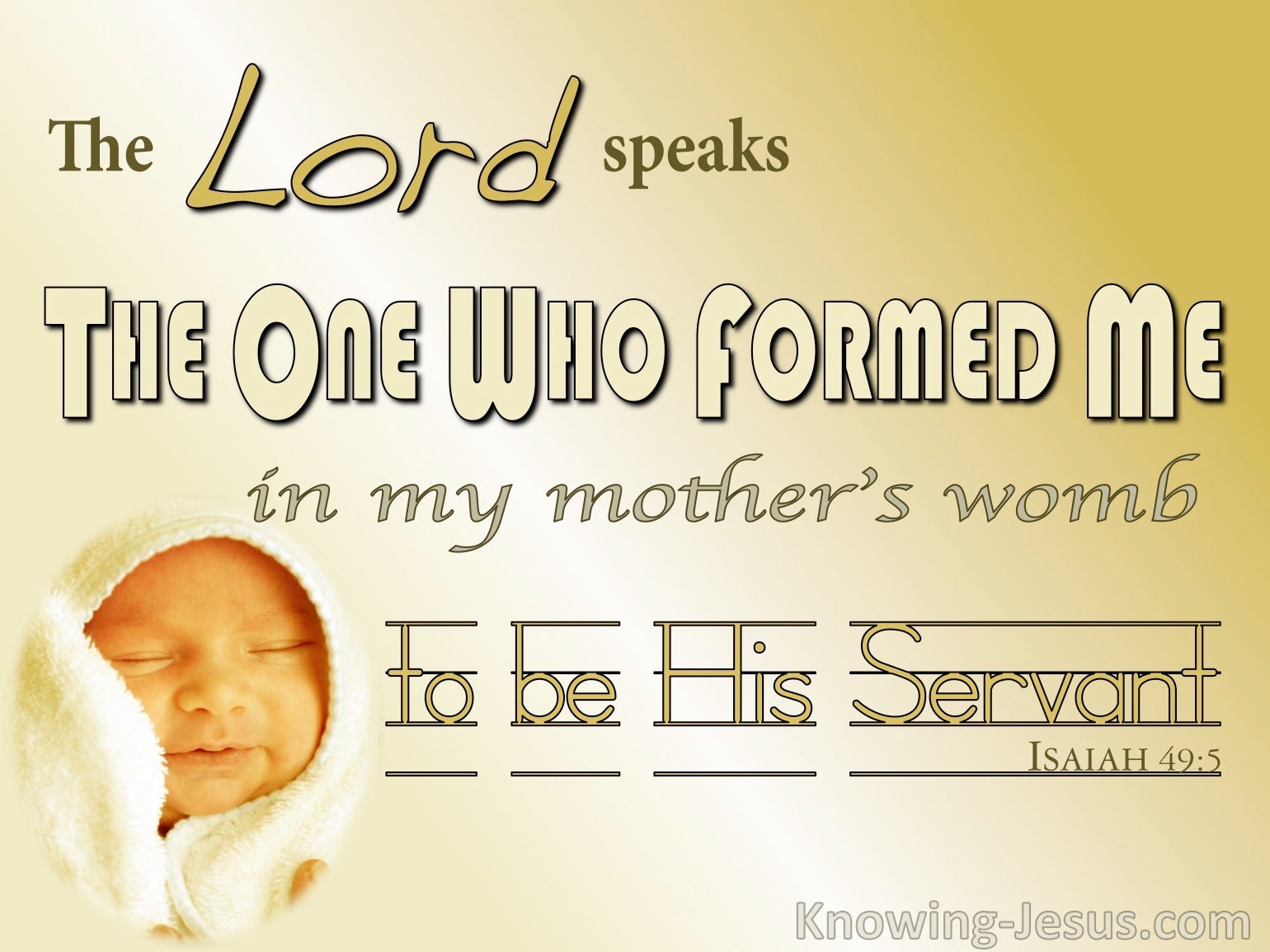 All Available Resources in Christ

God... who has blessed us with every spiritual blessing in the heavenly places in Christ. (Ephesians 1:3)

The object of our meditation is: Jesus Christ in heaven as our Sufficiency.... Our Lord Jesus’ resources came from His Father when He was here on this earth. He voluntarily lived in a state of absolute dependence on Him. He willed it to be so. He refused to have anything in Himself. Everything He needed He drew from heaven; He received it from above. When we are in resurrection-union with Christ, the Holy Spirit brings us into oneness with Him who is in heaven for us. That means: all the resources upon which the Lord Jesus lived are at our disposal. These resources were secret resources, that is, they were unknown to the world. The people around Him were absolutely in the dark as to the source of His power. There was a secret relationship between Him and His Father which impressed them. They saw that there was something in the background of His life, a mysterious power and knowledge, which was not ordinary to man. He had a whole set of resources at His command which no one possessed. He had a knowledge which was far beyond man’s understanding. And because He lived a secret life, a life in His Father, His resources were mysterious and wonderful to men.

If we live in heavenly union with Jesus Christ by the Holy Spirit, the same resources are at our disposal. Let us remind ourselves of the Word which is at the basis of our meditation: “The Father of our Lord Jesus Christ has blessed us with every spiritual blessing in the heavenlies in Christ.” That means that all the resources which are in Christ are available for us. But we have to learn to live in such close fellowship with Him as He lived with His Father in the days of His flesh.

The kindness and the love of God our Saviour toward man appeared.

I have loved you with an everlasting love.

In this the love of God was manifested toward us, that God has sent His only begotten Son into the world, that we might live through Him. In this is love, not that we loved God, but that He loved us and sent His Son to be the propitiation for our sins.

When the fullness of the time had come, God sent forth His Son, born of a woman, born under the law, to redeem those who were under the law, that we might receive the adoption as sons. § The Word became flesh and dwelt among us, and we beheld His glory, the glory as of the only begotten of the Father, full of grace and truth. § Great is the mystery of godliness: God was manifested in the flesh.

As the children have partaken of flesh and blood, He Himself likewise shared in the same, that through death He might destroy him who had the power of death, that is, the devil.

Thanks be to God for His indescribable gift!

Make a joyful shout to the Lord, all you lands! Serve the Lord with gladness; come before His presence with singing … Enter into His gates with thanksgiving, and into His courts with praise. Be thankful to Him, and bless His name. § For unto us a Child is born, unto us a Son is given; and the government will be upon His shoulder. And His name will be called Wonderful, Counselor, Mighty God, Everlasting Father, Prince of Peace.

He … did not spare His own Son, but delivered Him up for us all. § Therefore still having one son, his beloved, he also sent him.

Oh, that men would give thanks to the Lord for His goodness, and for His wonderful works to the children of men! § Bless the Lord, O my soul; and all that is within me, bless His holy name!

My soul magnifies the Lord, and my spirit has rejoiced in God my Savior.

Trust in the Lord with all thine heart, and lean not unto thine own understanding" (Prov. 3:5).

Restful trust is developed not so much by what the Lord Jesus does for us, but by who He is to us - and that necessitates fellowship.

"It is a wonderful thing to be so satisfied with the Lord Jesus' company, that we can be tranquil about everything. You will often find that it is the one of the most anxious temperament who finds most in Him, when such an one begins to know Him. I remember when I used to think that I should be happy beyond conception if I were able to say, I will fear no evil,' my heart is fixed, trusting in the Lord.' In order to reach this, you must find Him enough, without anything else. We all say that He is enough, but it is quite a different thing to know it practically. You can never prove the worth of anyone, until you are absolutely dependent upon him." -J.B.S.

"What do you need? Ask your Father about it. Instead of harassing your mind about it, present it to Him; and it is not said that He will necessarily give you what you ask, but He gives you His peace. You put your cares into His heart, and He will put His peace into yours."

"Our Father's purpose is an eternal purpose,' from eternity, embracing an eternity to come. He does not shape His thoughts according as circumstances arise, but the circumstances are controlled by His thoughts and plans. How blessed to know that He is absolute Master in all things; that even He maketh the wrath of man to praise Him, and the remainder of wrath He restrains.' It is the only thing that can give the smallest comfort in the midst of such a scene of confusion all around us." -F.W.G.

"Be anxious for nothing, but in everything, by prayer and supplication with thanksgiving, let your requests be made known unto God" (Phil. 4:6).

His Birth And Our New Birth

“Behold, a virgin shall bring forth a son, and they shall call His name Emanuel, which being interpreted is, God with us.” Isaiah 7:14

His Birth in History. "Therefore also that holy thing which shall be born of thee shall be called the Son of God." (Luke 1:35.) Jesus Christ was born into this world, not from it. He did not evolve out of history; He came into history from the outside. Jesus Christ is not the best human being, He is a Being Who cannot be accounted for by the human race at all. He is not man becoming God, but God Incarnate, God coming into human flesh, coming into it from outside. His life is the Highest and the Holiest entering in at the Lowliest door. Our Lord's birth was an advent.

His Birth in Me. "Of whom I travail in birth again until Christ be formed in you." (Gal. 4:19.) Just as Our Lord came into human history from outside, so He must come into me from outside. Have I allowed my personal human life to become a "Bethlehem" for the Son of God? I cannot enter into the realm of the Kingdom of God unless I am born from above by a birth totally unlike natural birth. "Ye must be born again." This is not a command, it is a foundation fact. The characteristic of the new birth is that I yield myself so completely to God that Christ is formed in me. Immediately Christ is formed in me, His nature begins to work through me.

God manifest in the flesh - that is what is made profoundly possible for you and me by the Redemption.

In Christ you have been brought to fullness.
Colossians 2:10

There is nothing more important to believers than having a sure relationship with God. If only we could understand that God purposed our eternal salvation in eternity past. Saving us from sin and death and hell was part of God’s amazing plan for our lives.

We don’t deserve His forgiveness or salvation, but it is His gift of grace to us.. and because we are in Christ, we have been brought to complete fullness. There is nothing lacking in the Christian, because we are complete in Him.

Too often however believers try to add something to Christ, as they did in Colossae. But when anything is added to the finished work of Christ it threatens our purity. We are complete in Him and purified in Him but all additions introduce a pollutant.

The teachings of the Gnostics were added to Paul’s teaching to the Colossians. As a result, they thrived on philosophic, religious speculations instead of the gospel. The legalism of the Jews was placed alongside Paul’s pure gospel of God’s grace and as a result, many were being sucked back into slavery under legalistic demands. The spurious, spiritual mysticism of pseudo-religiosity crept in with God’s truth and as a result, some lived by emotions and a false spirituality instead of Scripture.

False teachings abounded and they proliferate in increasing numbers today. And if we are not secure in our position in Christ, we will be swayed by alternatives. Paul cautions us not to allow human tradition, philosophy, or empty deceit to sway us: "I say this in order that no one may delude you with plausible arguments". Colossians 2:4

Paul warns us not to be deceived or deluded by the persuasive words of such teaching: "see to it that no one takes you captive through hollow and deceptive philosophy, which depends on human tradition and the elemental spiritual forces of this world – rather than on Christ". Colossians 2:8

Though He was God’s Son, He learned obedience through what He suffered.
Hebrews 5:8

The Lord Jesus Christ demonstrated the way God designed us to live our lives. He maintained close fellowship with God; His food was to do His Father’s will; He listened to the guidance of the Spirit and laid aside His glory for a season.  The Lord Jesus Christ learned obedience through the things that He suffered.

The Lord Jesus Christ illustrated the way that God ordained that man should live. He clothed Himself with mortal flesh to be the model; the exemplar; the standard. Willing obedience to the will of God was a vital lesson that He came to teach us all - and the Lord Jesus Christ learned obedience through the things that He suffered.

Too often we regard obedience as a limit to our freedom or a restraint on our liberty, but this is to misunderstand what freedom and liberty means in God’s economy. Too often we attribute the twisted mindset of man to the pure wisdom of God.. for God knows that obedience is a vital, first-step on our way to holiness. Obedience is a necessary step towards being conformed into the image of Christ. Obedience frees us from the bondage of sin to the liberty of life in Christ Jesus.