Though He was God’s Son, He learned obedience through what He suffered.
Hebrews 5:8

The Lord Jesus Christ demonstrated the way God designed us to live our lives. He maintained close fellowship with God; His food was to do His Father’s will; He listened to the guidance of the Spirit and laid aside His glory for a season.  The Lord Jesus Christ learned obedience through the things that He suffered.

The Lord Jesus Christ illustrated the way that God ordained that man should live. He clothed Himself with mortal flesh to be the model; the exemplar; the standard. Willing obedience to the will of God was a vital lesson that He came to teach us all - and the Lord Jesus Christ learned obedience through the things that He suffered.

Too often we regard obedience as a limit to our freedom or a restraint on our liberty, but this is to misunderstand what freedom and liberty means in God’s economy. Too often we attribute the twisted mindset of man to the pure wisdom of God.. for God knows that obedience is a vital, first-step on our way to holiness. Obedience is a necessary step towards being conformed into the image of Christ. Obedience frees us from the bondage of sin to the liberty of life in Christ Jesus.

Through disobedience, Adam fell, and we became slaves of sin and death. Through obedience, Christ died for our sins and delighted to do the Father’s will. In one, we were in bondage to sin.  In the Other, we are made children of God. We read in Romans chapter 6: "Do you not know that if you present yourselves as obedient slaves, you are slaves of the one you obey, either of sin resulting in death, or obedience resulting in righteousness?" Romans 6:16 – and Lord Jesus learned obedience through the things He suffered.

The Lord Jesus Christ came as our pattern. He came as God’s representative man. He demonstrated God’s design for humanity and illustrated how we should live. He clothed Himself with mortal flesh to be our model, exemplar, and standard – and He learned obedience through the things that He suffered.

Christ’s willing obedience secured for us His own imputed righteousness. His willing obedience removed us from Satan’s clutches into the Father’s arms. Though God Himself, Christ’s obedience to the Father’s will, saved you and me. His obedience secured for all who believe, the manifold riches of God’s amazing grace. Too often we regard obedience as rules and regulations limiting our freedom, but when filtered through the purity and grace of God, it delivers His life and light. 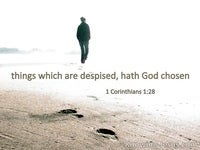