We count those blessed who endured You have heard of the endurance of Job and have seen the outcome of the Lord's dealings, that the Lord is full of compassion and is merciful. 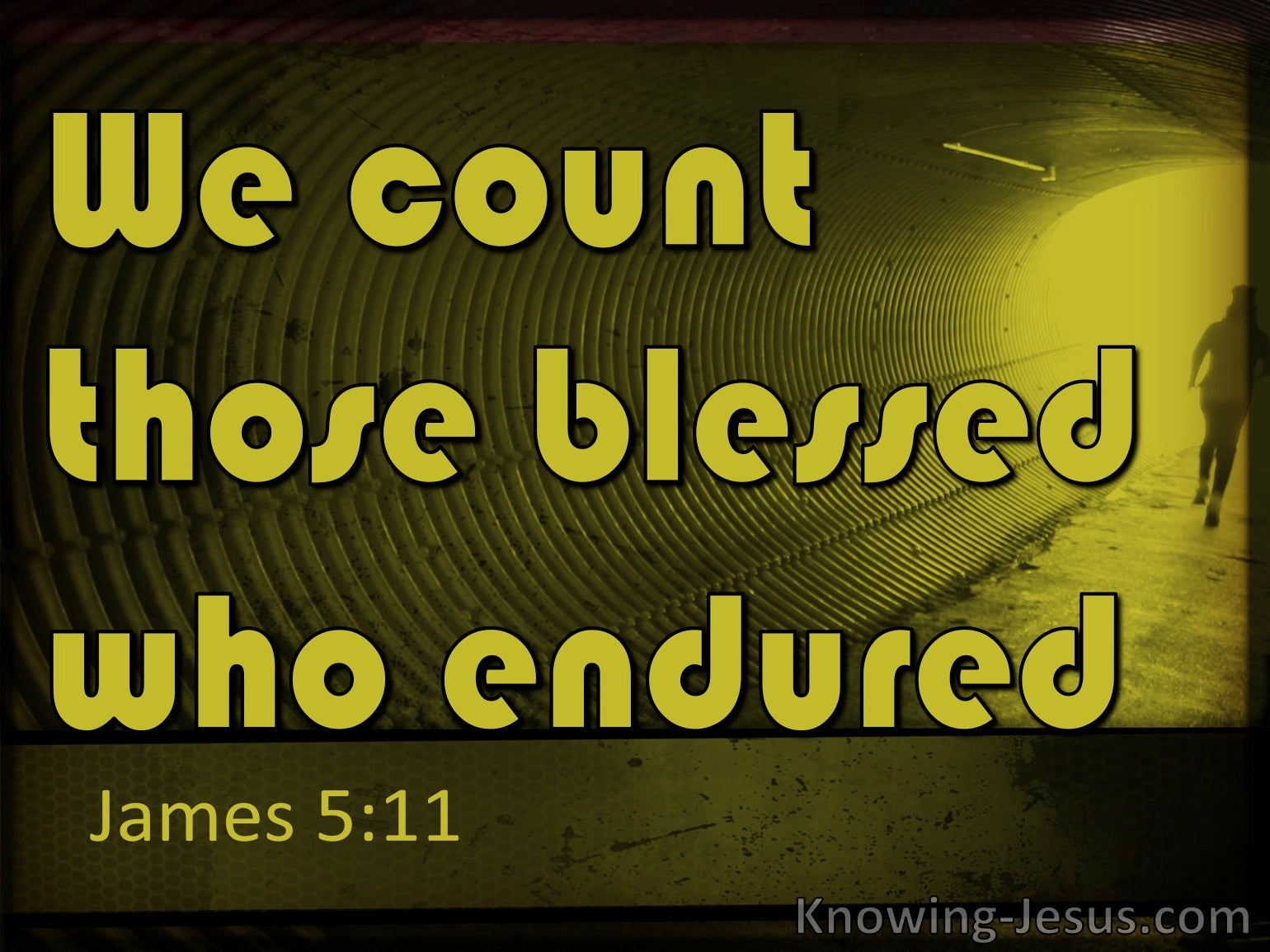 They knew Him not, nor the voices of the prophets which are read every sabbath. (Acts 13:27 ASV)

We would remind our readers that these messages are constituted by a principle which governs so much of the Bible. It is that, deeper than the words of Scripture, there is a voice; that it was and is possible to hear the words and miss the voice. The words are the statements; the voice is the meaning. We have proved this to be the case by such a statement as that in Isaiah 6:9: ear ye indeed, but understand not, and see ye indeed (margin: ontinually but perceive not.This is the condition lying behind our basic quotation in Acts 13:27.

It is sometimes positively amazing and staggering what even Christians and Christian leaders can do and say because of this deaf ear to the Spirit. They can take up and pass on most pernicious reports which are sheer lies and do untold harm to others and the Lord's interests because they do not so walk in the Spirit as to have Him say within: "That is not true." It is one thing to include belief in the Holy Spirit as a tenet of Christian doctrine, and it may be quite another thing to know when "the Spirit of truth" witnesses within the heart to the truth or the falsehood. It is significant that both the Remnant and the Overcomer are marked by this "hearing the voice." Jesus placed the ultimate issue of Life or death upon this "hearing the voice (not just the words) of the Son of Man."

"Every sabbath" they heard the words, but not the voice.... Let us pray for the ear of Samuel

"Oh, give me Samuel's ear
An open ear, O Lord!
Alive and quick to hear
Each whisper of Thy word!"

The grace of our Lord was exceedingly abundant, with faith and love which are in Christ Jesus.

You know the grace of our Lord Jesus Christ, that though He was rich, yet for your sakes He became poor, that you through His poverty might become rich. § Where sin abounded, grace abounded much more.

That in the ages to come He might show the exceeding riches of His grace in His kindness toward us in Christ Jesus. For by grace you have been saved through faith, and that not of yourselves; it is the gift of God, not of works, lest anyone should boast. § Knowing that a man is not justified by the works of the law but by faith in Jesus Christ, even we have believed in Christ Jesus, that we might be justified by faith in Christ and not by the works of the law; for by the works of the law no flesh shall be justified. § According to His mercy He saved us, through the washing of regeneration and renewing of the Holy Spirit, whom He poured out on us abundantly through Jesus Christ our Savior.

I am … the Bright and Morning Star.

A Star shall come out of Jacob.

The night is far spent, the day is at hand. Therefore let us cast off the works of darkness, and let us put on the armor of light. § Until the day breaks and the shadows flee away, turn, my beloved, and be like a gazelle or a young stag upon the mountains of Bether.

“Watchman, what of the night?” The watchman said, “The morning comes, and also the night. If you will inquire, inquire; return! Come back!”

I am the light of the world. § I will give him the morning star.

Take heed, watch and pray; for you do not know when the time is. It is like a man going to a far country, who left his house and gave authority to his servants, and to each his work, and commanded the doorkeeper to watch. Watch therefore … lest, coming suddenly, he find you sleeping. And what I say to you, I say to all: Watch!

Yield yourselves unto God, as those that are alive from the dead" (Rom. 6:13).

Deliverance from the reign of sin, and liberty in the life of Christ, are set forth as a doctrinal unit in Romans Six, Seven and Eight. This area of truth has but one key - the Cross. This is the great master key to spiritual life and liberty.

When we begin to comprehend Romans Six, we know that our death in Christ unto sin was completed at Calvary. When we have been in Romans Seven for a time, we come to realize that we have been struggling to produce that which God has already accomplished for us in Christ. When we thereby come to Romans Eight, we know at last that the Holy Spirit will produce in our experience what God completed for us on the Cross and in Christ our life.

"In Romans Six we see the foundation of our deliverance - the fact that we died with Christ; and also the conditions of our deliverance - that we reckon ourselves dead unto sin and yield to God as those that are alive from the dead. Romans Eight tells us the means and the method of our deliverance - that it is through the blessed Holy Spirit alone that we are actually delivered in everyday life, from sin's reign; the moment we cease from all our own efforts and let Him do all the work, He will begin delivering us from the power of sin. How long it takes some of us to come to the end of our own efforts can be seen in Romans Seven!" -W.R.N.

"That the righteousness of the law might be fulfilled in us, who walk not after the flesh, but after the Spirit" (Rom. 8:4).

Are You Ready To Be Offered?

“I am already being poured out as a drink offering.” 2 Timothy 4:6

"I am ready to be offered." It is a transaction of will, not of sentiment. Tell God you are ready to be offered; then let the consequences be what they may, there is no strand of complaint now, no matter what God chooses. God puts you through the crisis in private, no one person can help an other. Externally the life may be the same; the difference is in will. Go through the crisis in will, then when it comes externally there will he no thought of the cost. If you do not transact in will with God along this line, you will end in awakening sympathy for yourself.

"Bind the sacrifice with cords, even unto the horns of the altar." The altar means fire - burning and purification and insulation for one purpose only, the destruction of every affinity that God has not started and of every attachment that is not an attachment in God. You do not destroy it, God does; you bind the sacrifice to the horns of the altar; and see that you do not give way to self-pity when the fire begins. After this way of fire, there is nothing that oppresses or depresses. When the crisis arises, you realize that things cannot touch you as they used to do. What is your way of fire?

Tell God you are ready to be offered, and God will prove Himself to be all you ever dreamed He would be.

Have You Considered Job’s Friends? (JOB-study 16)

Job seems to be the most complete "word-picture"  of the Christian life in Scripture. Job appears to trace a believer’s life, from new-birth to the Millennial-Kingdom.. outlining a number of possible choices a believer may take in his Christian walk. Job, together with his wife and friends, hold to the same understanding and creed - a prescribed set of beliefs about God; truths about the character of God, but incomplete articles of faith.. beliefs that don’t present the whole truth of God.

From his early 'Christian' walk, Job’s relationship develops with God through prayer. From the start of her walk, Job’s wife trusts God under her husband’s 'covering'. Job’s three friends are certainly saved – they believed the word of the Lord. And similarly, like Job, they lack full understanding – but unlike Job we do not see in them a desire to relate to the Lord, in spirit, and in truth.

Job presents as a spiritual man, who in this world has deep tribulation and distress - an intercessor at the start, and a prayer-warrior at the end of his spiritual walk. A man that does not understand, but a man with a teachable spirit; a man who trusts in the Lord, but a man that is prepared to question God; a man whom the Lord trusts in the unseen world of spiritual warfare. Yes, Job is a man who is faithful to the point of death. Job is a man who overcomes.

Like Job, his wife is a virtuous woman, who holds to her husband's trust in God, but one who allows the long, spiritual battle in Job’s life, to cause her faith to fail. A woman whom the roaring lion manages, at last, to devour; to overcome. But she is a lady, like Noah’s wife, who remains under the protection of her man. Unlike Job, his 3 friends demonstrate religiosity in their pious, but carnal walk. They hold to their rigid, theological dogma, displaying an unteachable spirit. Their finger of

Without faith it is impossible to please God.
Hebrews.11:6

The Christian life begins with a simple act of faith – believe on the Lord Jesus Christ. I hear – I believe – I trust – I accept. This one small act of trust brings us out of sin and into salvation; out of darkness into His perfect light; out of Satan into Christ in God; out of death into life; out of despair into hope – out of ashes into beauty. There was nothing to see; there was nothing to do. Certainly – there was nothing to feel at first, just to rest on the truth of the Word of God.

Salvation of the spirit is once and for all a gift. A finished work of God in man’s spirit, as though I had never sinned. But the Christian life continues on, in this same principle of trust. The believing one.. the justified one once for all must now start the lifelong process of sanctification.

The sanctified one shall live by faith, The faith of the Son of God, working through your faith. Day by day and moment by moment - this is grace upon grace. His grace, given upon the grace given to you. And hour by hour, day