They went on stoning Stephen as he called on the Lord and said, "Lord Jesus, receive my spirit!" 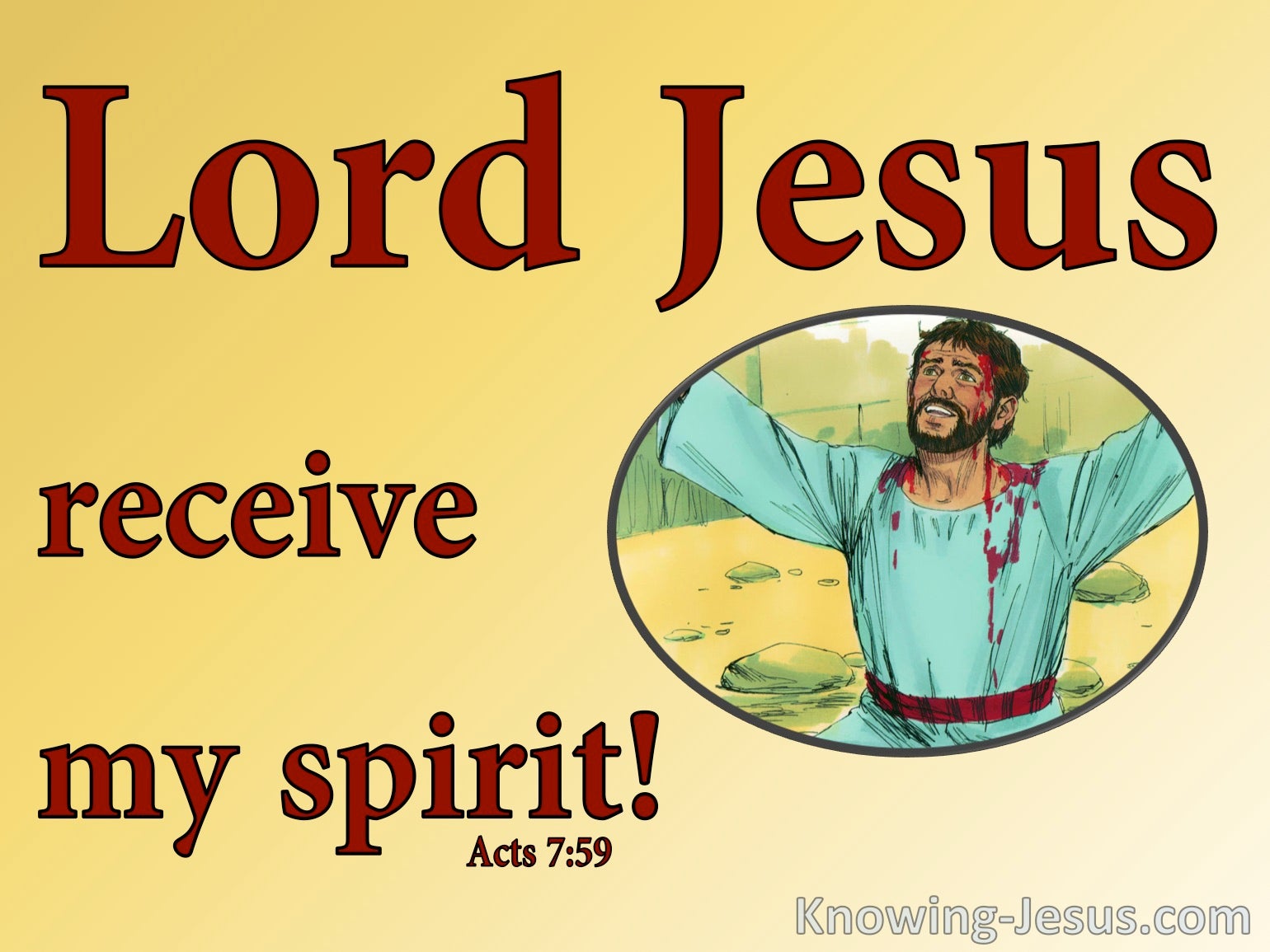 The Cross and the Way of Life

That is the principle of the Cross. He accepted that position of being able to do nothing out from Himself. It must all come out from God. There is no way through otherwise.... There was a revolution in my life thirty years ago when that principle of the Cross came flat up against ministry ministry that for years I had been producing against all my study, reading and late nights, to get up the stuff for ministry, till the whole thing became an intolerable burden in myself. Others perhaps thought it to be pretty good, but the crisis when listen to me, men and women who are in ministry, or contemplating it the whole turn came upon the recognition of this principle, this principle of the Cross when, with the door closed, I said to the Lord am finished in all ministry, I am never going to preach again unless You do something now. I have been doing it all these years; I have been producing this, now I am finished. You have got to do it.But I saw that principle, you see, as the principle of the Cross and I meant it.

Forgive me speaking of myself, but I must bring this home in some way. The next week would have seen my resignation in with my church officers, and I would have gone out from ministry if the Lord had not done it. But the Lord was true to His own principle. It was an utter end of anything that I could produce for ministry, and I meant it to be like that, because I recognized that God meant that. That was the principle of the Cross nothing out from ourselves. No fruit that labor and study of the mind and heart could produce has a way through in the work and service of God. God was true to His own principle He always is. From that day to this, there has been no trouble about ministry. It is easy to let ministry go, and much more easy than to accept it. This clamoring for ministry it is uncrucified flesh. Well, there has been an open heaven since then. Again I beg your forgiveness for making this personal reference, but this is a true thing. It is a principle which covers all the ground.

Isaac went out to meditate in the field in the evening.

Let the words of my mouth and the meditation of my heart be acceptable in Your sight, O Lord, my strength and my Redeemer.

When I consider Your heavens, the work of Your fingers, the moon and the stars, which You have ordained, what is man that You are mindful of him, and the son of man that You visit him? § The works of the Lord are great, studied by all who have pleasure in them.

Blessed is the man who walks not in the counsel of the ungodly, nor stands in the path of sinners, nor sits in the seat of the scornful; but his delight is in the law of the Lord, and in His law he meditates day and night. § This Book of the Law shall not depart from your mouth, but you shall meditate in it day and night. § My soul shall be satisfied as with marrow and fatness, and my mouth shall praise You with joyful lips. When I remember You on my bed, I meditate on You in the night watches.

How long, O Lord? Will You forget me forever? How long will You hide Your face from me?

Every good gift and every perfect gift is from above, and comes down from the Father of lights, with whom there is no variation or shadow of turning. § But Zion said, “The Lord has forsaken me, and my Lord has forgotten me.” “Can a woman forget her nursing child, and not have compassion on the son of her womb? Surely they may forget, yet I will not forget you.”

You will not be forgotten by Me! I have blotted out, like a thick cloud, your transgressions, and like a cloud, your sins.

Now Jesus loved Martha and her sister and Lazarus. So, when He heard that he was sick, He stayed two more days in the place where He was. § A woman . . . cried out to Him, saying, “Have mercy on me, O Lord, Son of David!” . . . But He answered her not a word.

The genuineness of your faith, being much more precious than gold that perishes.

Too late! Too late! If we seek to deal with sin by reckoning at the moment it becomes an issue. Our stand and attitude from the beginning of each day is to be a settled matter as we rest in our risen Lord Jesus: the death of the Cross separates me from the enslavement of sin and self, and I continually abide in my new life, Christ Jesus. My life is "hid with Christ in God" (Col. 3:3).

"The reckoning believer is to meet every proposal of self-gratification armed with the mind to suffer in the flesh. Sin is the gratification of self, but he that hath suffered in the flesh hath ceased from the domination of sin.'

"If you allow yourself to entertain a suggestion of self-gratification - if you consider it, and give it a place in your mind - you are defeated. You have laid aside your armor, and will fall an easy prey to the foe. But there will be no response to the suggestion or temptation if you stand armed with the mind to suffer in the flesh. That which is proposed to you is exactly opposite to what you are set for. It is suggested that you should be pleased and gratified in the very thing in which you are fully minded to suffer. You are now in conflict with sin - not going along with it; you suffer in the flesh, and have ceased from the practice of sin." -C.A.C.

"So that he can no longer spend the rest of his natural life living by [his] human appetites and desires but [he lives] for what God wills" (1 Pet. 4:2, Amp.).

The reason many of us leave off praying and become hard towards God is because we have only a sentimental interest in prayer. It sounds right to say that we pray; we read books on prayer which tell us that prayer is beneficial, and our minds are quieted and our souls uplifted when we pray; but Isaiah implies that God is amazed at such thoughts of prayer.

Worship and intercession must go together, the one is impossible without the other. Intercession means that we rouse ourselves up to get the mind of Christ about the one for whom we pray. Too often instead of worshipping God, we construct statements of prayer works. Are we worshipping or are we in dispute with God - e.g. "I don't see how You are going to do it." This is a sure sign that we are not worshipping. When we lose sight of God we become hard and dogmatic. We hurl our own petitions at God's throne and dictate to Him as to what we wish Him to do. We do not worship God, nor do we seek to form the mind of Christ. If we are hard towards God, we will become hard towards other people.

Are we so worshipping God that we rouse our selves up to lay hold on Him so that we may be brought into contact with His mind about the ones for whom we pray? Are we living in a holy relationship to God, or are we hard and dogmatic?

"But there is no one interceding properly" ah, then be that one yourself, you be the one who worships God and who lives in holy relationship to Him. Get into the real work of intercession, and remember it is a work, a work that taxes every power; but a work which has no snare. Preaching the gospel has a snare; intercessory prayer has none.

When considering our gracious, unconditional acceptance by God.. one word remains - LOVE. Love caused God to regard with compassion, our lost, hopeless, sin-sick race. Love caused the Son to become sin for us.. that we might be the righteousness of God in Him. Love caused the Godhead to choose us from before the foundation of the world. Love causes the Spirit to guide us, comfort us and conform us into Christ’s likeness. Love caused the Bridegroom to love His Bride and to give Himself for her. Love will cause the Son of God to return, to take His precious bride to be with Himself. Love is the one attribute that He longs to develop in our love-sick lives. Love, as I have loved you – by this shall all men know you are Mine.

Yes – the greatest strategy of Satan is to shatter trust in God, into a million pieces. Satan is adept at twisting life’s circumstances into occasions for mistrusting God. He seeks day by day to manipulate the heart, into a distrust of our Loving Father. He subtly distorts our perceptions.. craftily massaging our understanding of God. Oh, Satan is adept at causing the long-term believer – to fail and fall and flounder. But God has established in the heavens a higher principle than fear

Picture of Man courtesy of imagebase.davidniblack.com

Well, the coming kingdom of Christ has its roots in heaven. The Lord’s future world empire is to reflect the will of God and the rule of heaven, and Jesus taught them saying, Thy kingdom come. Thy will be done on earth as it is in heaven. Matthew 6:10.  No, the coming kingdom of Christ is not of this present world’s SYSTEM. Christ’s future empire is not rooted in the sin-sodden soil of today’s current satanic system. Christ’s sovereign state will not be founded on the foul filth of this doomed domain.

The incumbent occupier prowls around, like a roaring lion seeking whom he may devour. The current ‘prince on the power of the air,’ must be first chained in the bottomless pit. The resident ‘god of this world,’ must first be smashed by the Stone, that is 'made without hands….' For it is 'that old serpent called the devil, and Satan', who currently rules this world system. It is “Satan which deceiveth the whole world,”  for he currently holds the reins of earthly dominion.