O magnify the LORD with me, And let us exalt His name together. 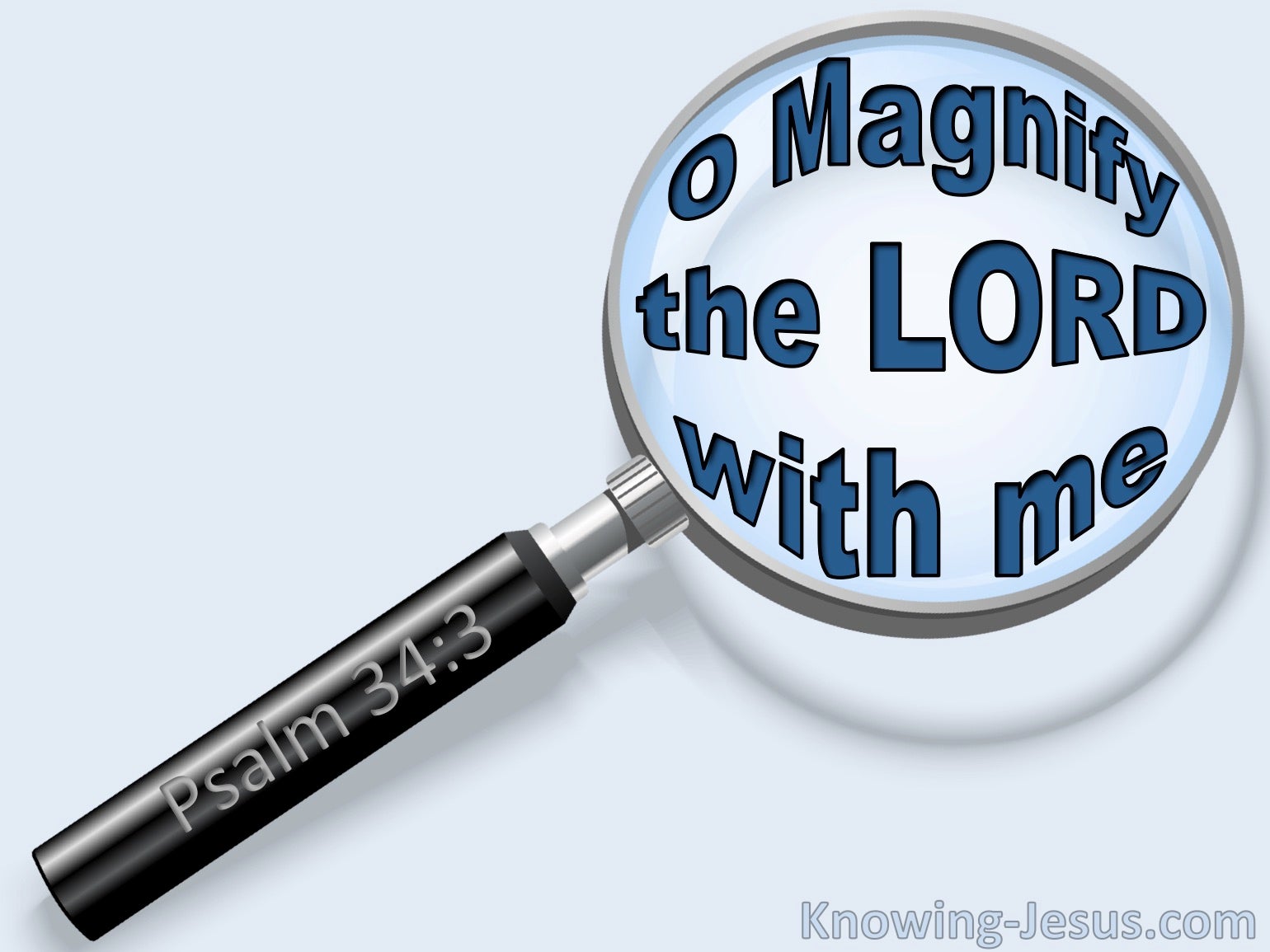 Be strong in the Lord, relying on His mighty strength. (Ephesians 6:10 ISV)

The Lord does not put us in glass houses to grow us, to be His trees; the Lord does not protect us from the storms, the adversities; He exposes us to the bitter winds and the scorching suns of adversity and trial. The Lord is working in us that which is according to His own Nature eternity, the enduring, the everlasting God that which will not be easily or hardly carried away. He is putting substance in you. Oh, today we fear that the appeal to become Christians is so often in terms of having an easy or a good time; being happy and enjoying yourself; well, thank God for ALL divine joy, but this is true to the House, to the City, that the first thing the Lord is working toward and seeking to work into His people is that substantial, steadfast, enduring faithfulness that is according to His own nature. Substantial! Oh for substantial Christians that don need coddling and nursing and running after all the time; being pandered to to get them to go on or stand up. Men and women like cedars of Lebanon; like the hewn stones weighty, accountable, and responsible to carry weight and all that is meant by strength.

I can only remind you again of what a large place that has in the Word of God: be strong, be strong in the Lord in the strength of His might, be strong in the grace that is in Christ Jesus. Think again. Want to understand why the winds are allowed to blow so fiercely... the storms? To get us away from that natural, easy-going-ness or cheapness, lightness, frivolousness and to make us people of weight. Strength through testing, through adversity strength... to endure throughout all ages. There is much which is going to be carried away in the last great testing, and if, therefore, trial and adversity is the only way to deepen us, to put caliber into us, I suppose we must expect more of it as the time shortens.

How great is Your goodness, which You have laid up for those who fear You.

Since the beginning of the world men have not heard nor perceived by the ear, nor has the eye seen any God besides You, who acts for the one who waits for Him. § “Eye has not seen, nor ear heard, nor have entered into the heart of man the things which God has prepared for those who love Him.” But God has revealed them to us through His Spirit. § You will show me the path of life; in Your presence is fullness of joy; at Your right hand are pleasures forevermore.

How precious is Your lovingkindness, O God! Therefore the children of men put their trust under the shadow of Your wings. They are abundantly satisfied with the fullness of Your house, and You give them drink from the river of Your pleasures. For with You is the foundation of life; in Your light we see light.

Godliness is profitable for all things, having promise of the life that now is and of that which is to come.

The heart is deceitful above all things, and desperately wicked; who can know it? I, the Lord, search the heart, I test the mind, even to give every man according to his ways, according to the fruit of his doings. § You have set our iniquities before You, our secret sins in the light of Your countenance. § The Lord turned and looked at Peter. Then . . . Peter went out and wept bitterly.

Jesus did not commit Himself to them, because He knew all men, and had no need that anyone should testify of man, for He knew what was in man. § He knows our frame; He remembers that we are dust. § A bruised reed He will not break, and smoking flax He will not quench.

The Lord knows those who are His. § I am the good shepherd; and I know My sheep, and am known by My own… My sheep hear My voice, and I know them, and they follow Me. And I give them eternal life, and they shall never perish; neither shall anyone snatch them out of My hand.

Stand Where You Are!

God, who is rich in mercy, for His great love with which He loved us . . . hath made us alive together with Christ . . . and hath raised us up together, and made us sit together in heavenly places in Christ Jesus" (Eph. 2:4;6).

Believers are not occupying their position! At best, most are trying to attain a victorious position by means of prayer, Bible study, commitment, reconsecration, surrender, and so forth. But the answer is simply to abide where we have already been placed - in our risen Lord Jesus Christ. Abide above, and keep looking down!

"The more we abide in the Lord on the other side, the less disappointed we will be here, for when we are there we import new joys and new hopes into this old world, from an entirely new one, and we therefore in every way surpass the inhabitants of this lost world." -J.B.S.

"You must abide in Christ in heaven before you can descend with heavenly ability to act for Him down here. The great secret of all blessing is to come from the Lord. Most Christians go to Him."

"Christian experience is our measure of apprehension of that which is already true of us in the Lord Jesus Christ." -A.J.

The Test Of Self-Interest

As soon as you begin to live the life of faith in God, fascinating and luxurious prospects will open up before you, and these things are yours by right; but if you are living the life of faith you will exercise your right to waive your rights, and let God choose for you. God sometimes allows you to get into a place of testing where your own welfare would be the right and proper thing to consider if you were not living a life of faith; but if you are, you will joyfully waive your right and leave God to choose for you. This is the discipline by means of which the natural is transformed into the spiritual by obedience to the voice of God. long gap

Whenever rights are made the guidance in the life, it will blunt the spiritual insight. The great enemy of the life of faith in God is not sin, but the good which is not good enough. The good is always the enemy of the best. It would seem the wisest thing in the world for Abraham to choose, it was his right, and the people around would consider him a fool for not choosing. Many of us do not go on spiritually because we prefer choosing what is right instead of relying on God to choose for us. We have to learn to walk according to the standard which has its eye on God. "Walk before Me."

Paul says this to the carnal Corinthian Christians: “and I, brethren, could not speak to you as to spiritual people, but as to carnal, as to babes in Christ. I fed you with milk and not with solid food, for until now you were not able to receive it, and even now you are still not able – for you are still carnal. For where there is envy, strife, and divisions among you, are you not carnal and behaving like mere men?” 1Cor 2:14

How should we live the Christian life? Once the natural man is born from above, he should live as a spiritual man. The one taken from the old creation should forever live as a new creation. The one that was “of your father the devil”, at once should live as a child of God. BUT… There is an inevitable ‘but’ in the life of every Christian. There is an inevitable ‘but’ in your life and in mine. There is a half-way house – an obstacle to overcome – and it all depends on self-will.

The intermediate position is the one of carnality.. one governed by the flesh. Paul speaks to the Corinthian Christians as ”carnal” – as babes in Christ. They had received the supernatural birth but were carnal and still “walking as men”. A newborn babe must grow and a child must develop into a man, and so too the Christian. A babe in Christ must grow into spiritual maturity. But the carnal man is a fleshly believer. The carnal believer is one that remains a babe in Christ.

One evidence of carnality is stunted

It was Paul that wrote the following in Phil.3:13, 14: Brothers, I do not consider that I have made it my own. But one thing I do: forgetting what lies behind and straining forward to what lies ahead, I press on toward the goal for the prize of the upward call of God in Christ Jesus.”      And in 2Tim.1:12 he wrote: But I am not ashamed, for I know whom I have believed, and I am convinced that He is able to keep what I have committed to Him until the Day of Christ.    While in Phil.1:6 he said And I am sure of this, that He who began a good work in you will bring it to completion at the day of Jesus Christ

This one thing I do. This ONE thing. There is strength in having one single objective.. an individual goal – a unique purpose. There is power in having a limited aim.. a distinct motivation – a solitary intent in life. Too many Christians suffer from attempting to juggle a variety of purposes. To many, however, find themselves chasing after diffuse aims.. or an obscure aspiration.

Too many believers allow the weight of past forgiven sins.. to inhibit their life’s purpose, without recognising their position in Christ – a position in Christ that has gained them complete acceptance with God. Too many are imprisoned with buried hurts.. hurts which the Spirit alone can identify and heal. Hurts which inhibits full fellowship with the Father. Hurts which can cloud pure communion with the Lord.

So what is this one purpose that the believer should strain after? What