"And he will make a firm covenant with the many for one week, but in the middle of the week he will put a stop to sacrifice and grain offering; and on the wing of abominations will come one who makes desolate, even until a complete destruction, one that is decreed, is poured out on the one who makes desolate." 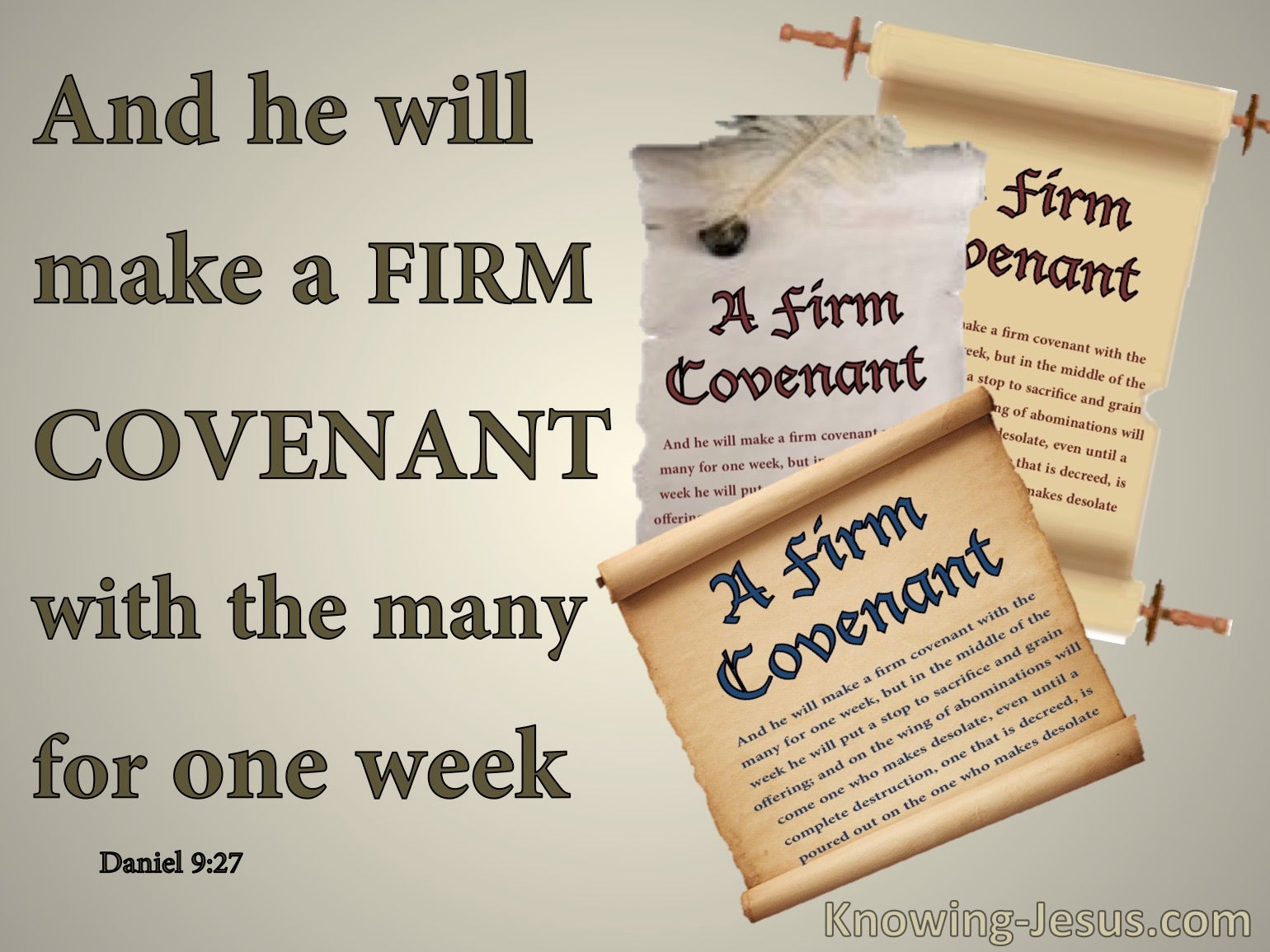 The Place Of Ascendancy

The authority of darkness is a very real thing to us. We have experiences, and if we were to capitulate to them, that would be the end of us. He tries to bring upon us that impingement of the authority of darkness, and if we surrender to it, capitulate to it, accept it, we are beaten. If we are the Lord's, Christ is within, and Christ is supreme and we must go on even if we have no feeling, or if we have a very bad feeling; when it seems to be the last thing we ought to be saying, we say it because it is God's fact, and when we begin to affirm God's fact we win through.

Believers know what it is for the enemy to try to make them accept the authority of darkness. Stand upon the truth of God. God does not change with our feelings. God does not alter with our consciousness. This whole life of ours is subject to variation more swift than the variation of weather, but He rules, unalterable, unchangeable. He is "the same yesterday, and today, and for ever." And if He is there within, He has come to stay, and victory is in faith; believing that, standing on that, holding to that; and we must carry that through to its final and full issue, that He is Lord of all, "Head of all principality and power." Satan will sometimes try to make us believe that he is in the place of ascendancy, the place of supremacy, but since Calvary he is not, we stand there.

It pleased the Lord to bruise Him; He has put Him to grief.

Now My soul is troubled, and what shall I say? ‘Father, save Me from this hour’? But for this purpose I came to this hour. Father, glorify Your name.” Then a voice came from heaven, saying, “I have both glorified it and will glorify it again.” § “Father, if it is Your will, take this cup away from Me; nevertheless not My will, but Yours, be done.” Then an angel appeared to Him from heaven, strengthening Him.

Being found in appearance as a man, He humbled Himself and became obedient to the point of death, even the death of the cross. § Therefore My Father loves Me, because I lay down My life that I may take it again. § For I have come down from heaven, not to do My own will, but the will of Him who sent Me. § Shall I not drink the cup which My Father has given Me?

The Father has not left Me alone, for I always do those things that please Him. § My beloved Son, in whom I am well pleased. § My Elect One in whom My soul delights!

You who make mention of the Lord, do not keep silent.

[You] have made us kings and priests to our God. § The sons of Aaron, the priests, shall blow the trumpets; and these shall be to you as an ordinance forever throughout your generations. When you go to war in your land against the enemy who oppresses you, then you shall sound an alarm with the trumpets, and you will be remembered before the Lord your God, and you will be saved from your enemies. I did not say to the seed of Jacob, “Seek Me in vain.” § Their voice was heard; and their prayer came up to His holy dwelling place, to heaven. § The eyes of the Lord are on the righteous, and His ears are open to their cry. § Pray for one another. . . . The effective, fervent prayer of a righteous man avails much. Come, Lord Jesus! § Do not delay, O my God. § Looking for and hastening the coming of the day of God.

Abiding involves a dual choice. We can abide in the old nature and thereby become the victims of the internal civil war as depicted in Romans Seven. Or, we can abide (rest) in the risen Lord Jesus, the Source of our new nature, and thereby become the glad recipients of His life and liberty, as depicted in Romans Eight. "The Spirit of life in Christ Jesus hath made me free from the law of sin and death" (Rom. 8:2).

"How do we abide? Of God are ye in Christ Jesus' (1 Cor. 1:30). It is all the work of God to place you there, and He has done it. Now stay there! Do not be moved back onto the ground of the old nature. Never look at yourself as though you were not in the risen Lord Jesus Christ. Look at Him and see yourself a new creation in Him. Look at Him as the very source of your Christian life. Abide in Him. Rest in the fact that God has placed you in eternal union with His Son, and let the Holy Spirit take care of His work in you. It is for Him to make good the glorious promise that sin shall not have dominion over you' (Rom. 6:14)."

"We should be spared years of struggle and failure if we learned at once - as the converts did in the days of Paul - that we ourselves were taken through the death of the Lord Jesus. The past blotted out, the pardoned sinner accounted crucified with the crucified Lord, henceforth joined as a new creation to the risen Lord and now sharing His life (Rom. 5:10)."

The Patience Of Faith

“Because thou hast kept the word of My patience.” Revelation 3:10

Patience is more than endurance. A saint's life is in the hands of God like a bow and arrow in the hands of an archer. God is aiming at something the saint cannot see, and He stretches and strains, and every now and again the saint says - "I cannot stand any more." God does not heed, He goes on stretching till His purpose is in sight, then He lets fly. Trust yourselves in God's hands. For what have you need of patience just now? Maintain your relationship to Jesus Christ by the patience of faith. "Though He slay me, yet will I wait for Him."

Faith is not a pathetic sentiment, but robust vigorous confidence built on the fact that God is holy love. You cannot see Him just now, you cannot understand what He is doing, but you know Him. Shipwreck occurs where there is not that mental poise which comes from being established on the eternal truth that God is holy love. Faith is the heroic effort of your life, to fling yourself in reckless confidence on God.

God has ventured all in Jesus Christ to save us, now He wants us to venture our all in abandoned confidence in Him. There are spots where that faith has not worked in us as yet, places untouched by the life of God. There were none of those spots in Jesus Christ's life, and there are to be none in ours. "This is life eternal, that they might know Thee." The real meaning of eternal life is a life that can face anything it has to face without wavering. If we take this view, life becomes one great romance, a glorious opportunity for seeing marvellous things all the time. God is disciplining us to get us into this central place of power.

Faith and Freedom - Growing In Grace (30)

If we died with Christ, we believe that we will also live with Him. We know that Christ, being raised from the dead, will never die again; death no longer has dominion over Him. For the death He died He died to sin, once for all, but the life He lives He lives to God. So you also … sin will not rule over you, because you are not under law but under grace
Romans 6:8-11

Many people like to think that death is the cessation of life. Certain Jewish scholars and some Christian teachers teach this. It may seem logical to some and even desirable, but it is not what Scripture teaches. In Matthew 22, Jesus says: have you not read what was spoken unto you by God, saying, “I am the God of Abraham, I am the God of Isaac, and I am the God of Jacob. God is not God of the dead, but of the living. Matt.22:32

Death is not the cessation of life but is more accurately translated ’separation’. When my father died in 2010, he did not cease to exist.. his life did not cease to ‘be.. but his spirit and soul separated from his body. Paul tells us: to be absent from the body, is to be present with the Lord, and this principal of death or separation, started in Eden, when Adam was told: in the day that thou eatest thereof thou shalt surely die. The day Adam disobeyed God was the day he was separated from God.

The day that Adam ate the forbidden fruit, he died spiritually. He was ‘separated’ spiritually from his Creator, even though his physical body lived until he was 930 years old. Because of this one man’s sin all humanity is born into the world separated from God. The natural man is very much physically alive, but born dead in trespasses and sins. The unbeliever (the natural man) is ‘dead’ – spiritually separated from God.

Misunderstanding the meaning of the word

Jesus said: I have glorified Thee on the earth. I have finished the work which Thou gavest Me to do.
John 17:24

Our Work of Earth

Assuredly this entreaty to the Father demonstrates a life given over to the love of God.. demonstrating the final step in a life that lived, from start to finish, unto God. Demonstrating the concluding comment in a life.. exemplified as ‘good‘ – demonstrating a life that denied self.. a life teaching us that we should also, only do the things the Father shows us to do. No wonder at the genesis of His earthly ministry a voice from heaven was heard to say, Thou art My beloved Son, in Whom I am well pleased. Mk.1:11. God, in His omniscience, knew the work of the Lord would be completed in time.. for He knew the end from the beginning – from the foundation of the world. No wonder.. through the inspiration of the psalmist, this Father could answer Him.. ask of Me, and I will give Thee. Ps.2:8

His desire was not to receive for Himself – His sublime prayer prays for others. His majestic, magnificent, glorious prayer was for you and for me. It was others for whom Jesus prayed.. those of His own that were left behind. He prayed for those who believed in Him – to be kept, in Him while in the world. I pray not that thou shouldest take them out of the world, but that thou shouldest keep them from the evil one. He prayed. Jn.17:15

And Paul and all