'I know your deeds, that you are neither cold nor hot; I wish that you were cold or hot. 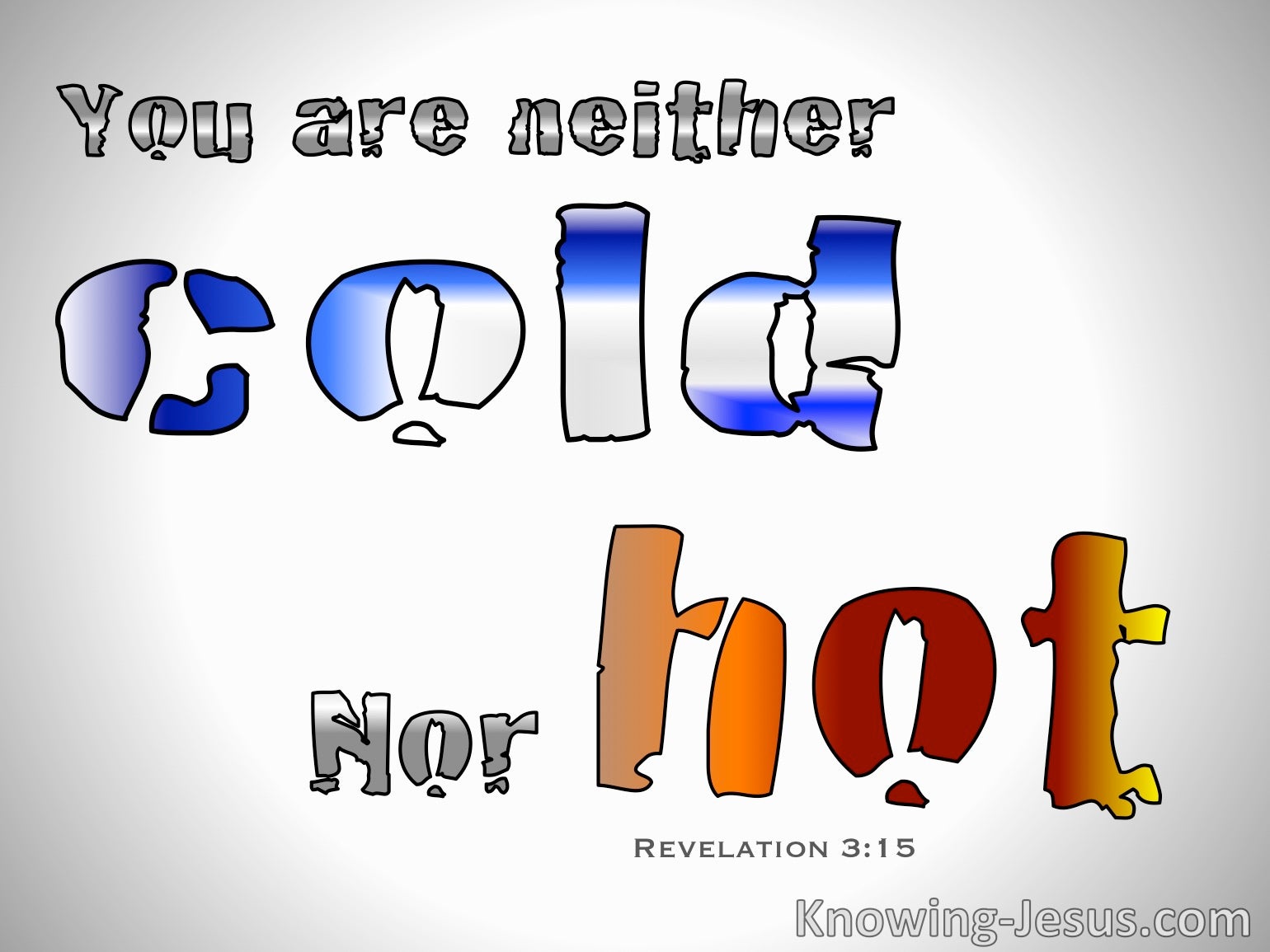 If any man is in Christ, he is a new creature: the old things are passed away; behold, they are become new. But all things are of God. (2 Corinthians 5:17,18 ASV)

The all-inclusive rule of thenew creation is that "all things are of (out from)God." Concerning this fact the Apostle Paul uses the word"but" "But all things are of God"as though he would anticipate, intercept, or arrest an impulseto rush away and attempt life or service upon an old creationbasis, or with old creation resource. The great question then is: Whatdoes it mean that all things in this new creation are out fromGod? What kind of a life will such a life be? To answer thatquestion adequately would be a very comprehensive task and themost revolutionary thing conceivable.

To begin with, we should have tobe settled regarding the difference between the old andthe new creations, and then as to how far-reaching thatdifference is. In addition, we should need to see that God hasput these two creations asunder, utterly and forever, and howevergracious and forbearing He may be with us in our ignorance andslowness of apprehension, He never accepts the overlapping orintertwining of the two. Then there would be the further need ofan inward, intelligent judgment and power by which we are madeaware of the Divine veto upon the one and energy toward theother....

It is not what is done for God that will last, but what isdone by God. The measure of spiritual value is determined by the measure inwhich God promotes it, not the measure of human activitiesaccording to human judgments and energies in the name of God.

I will pray the Father, and He will give you another Helper, . . . the Spirit of truth.

It is to your advantage that I go away; for if I do not go away, the Helper will not come to you; but if I depart, I will send Him to you.

The Spirit Himself bears witness with our spirit that we are children of God. § You did not receive the spirit of bondage again to fear, but you received the Spirit of adoption by whom we cry out, “Abba, Father.” § The Spirit … helps in our weaknesses. For we do not know what we should pray for as we ought, but the Spirit Himself makes intercession for us with groanings which cannot be uttered.

The God of hope fill you with all joy and peace in believing, that you may abound in hope by the power of the Holy Spirit. § Hope does not disappoint, because the love of God has been poured out in our hearts by the Holy Spirit who was given to us.

By this we know that we abide in Him, and He in us, because He has given us of His Spirit.

Shall I not seek security for you, that it may be well with you?

There remains … a rest for the people of God. § My people will dwell in a peaceful habitation, in secure dwellings, and in quiet resting places. § There the wicked cease from troubling, and there the weary are at rest. § They … rest from their labors. The forerunner has entered for us, even Jesus, having become High Priest forever according to the order of Melchizedek. Come to Me, all you who labor and are heavy laden, and I will give you rest. Take My yoke upon you and learn from Me, for I am gentle and lowly in heart, and you will find rest for your souls. For My yoke is easy and My burden is light. § In returning and rest you shall be saved; in quietness and confidence shall be your strength. The Lord is my shepherd; I shall not want. He makes me to lie down in green pastures; He leads me beside the still waters.

Be anxious for nothing, but in everything, by prayer and supplication with thanksgiving, let your requests be made known unto God" (Phil. 4:6).

Ignorance insures insecurity; scriptural knowledge secures strength. "For God hath not given us the spirit of fear, but of power, and of love, and of a sound mind" (2 Tim. 1:7).

"In mechanics, wobbling is weakness. Power issues from God's restfulness. Are we resting in the Lord? Can we wait patiently for Him to act? Anxiety reduces spiritual energy. Lack of rest of heart is one of the most serious hindrances to Christians.

"Fret of soul when wronged, or fuss over financial or other concerns, is a depletion of power, a dissipation of energy. From the rock basis of rest in Him we can put forth the whole of our energies. Perfect peace is our promised portion."

"Martha gets instruction; we all get that, for our Lord neglects none of us; but she did not get His company; company is what gives rest to the heart."

"Nothing can separate the believer from the love of God, and under no circumstances whatever can he come under the infliction of wrath from God. He may have to correct His saints for their sins, and where there has been no failure He may chasten (child train) them for their profit, that they may become partakers of His holiness; but all this is in love, not in wrath. Every action of God toward His saints is in grace and blessing; it is ever the outcome of His love."

"And the peace of God, which passeth all understanding, shall keep your hearts and minds through Christ Jesus" (Phil. 4:7).

“A Man of sorrows and acquainted with grief.” Isaiah 53:3

We are not acquainted with grief in the way in which Our Lord was acquainted with it; we endure it, we get through it, but we do not become intimate with it. At the beginning of life we do not reconcile ourselves to the fact of sin. We take a rational view of life and say that a man by controlling his instincts, and by educating himself, can produce a life which will slowly evolve into the life of God. But as we go on, we find the presence of something which we have not taken into consideration, viz., sin, and it upsets all our calculations. Sin has made the basis of things wild and not rational. We have to recognize that sin is a fact, not a defect; sin is red-handed mutiny against God. Either God or sin must die in my life. The New Testament brings us right down to this one issue. If sin rules in me, God's life in me will be killed; if God rules in me, sin in me will be killed. There is no possible ultimate but that. The climax of sin is that it crucified Jesus Christ, and what was true in the history of God on earth will be true in your history and in mine. In our mental outlook we have to reconcile ourselves to the fact of sin as the only explanation as to why Jesus Christ came, and as the explanation of the grief and sorrow in life.

He hath filled the hungry with good things; and the rich he hath sent empty away.
Luke 1:53

I wonder if you have ever been hungry – really, really, really hungry – so starved of sustenance that you would do anything for a crust of bread? I wonder if you have ever experienced agonising pangs of dry, parched thirst – thirst, so raging, that it caused your dehydrated body to cry out in crazed longing? Over a sixth of humanity feel the ravages of physical hunger and craving for water. Many more hit pillows or pavement with a deep emptiness in their belly and bowls. However shocking such statistics – more horrific is the world’s spiritual hunger. However scandalous the malnourished hordes of humanity are.. spiritual need is an even greater lack.

Acute, bodily needs are almost trifling compared with humanity’s deep spiritual want, and yet the deep-seated spiritual need is less discernible in today’s masked culture. Man’s intense, spiritual dearth is often hidden, disguised, or camouflaged. Hidden disguised or camouflaged beneath a self-erected, protective exterior. Can you argue that God is not good, or gracious to allow such physical deficiency? No, for God makes His sun to rise on the evil and the good, He sends rain on the just and the unjust. Matthew 5:45. It is man’s sins of greed and disinterest that permits scarcity and want in the world. It is Satan’s ploy to infect the world and cause distress of nations and pain to man.

Though very real, the physical need of man is a parable of the grotesque paucity.. an allegory lurking behind closed church doors and spiritual slums of the globe. Can you argue that God is not good, or gracious to allow such spiritual deficiency? No! for had ye believed Moses, ye would have believed Me,  said Jesus, for he wrote of Me. John 5:46.

The Scriptures are the most widely circulated book, and yet the Word of God often remains unopened and unread and dusty. Many seek

How often we hear of the beautiful bride in all her loveliness delaying her journey. How often she tarries awhile before walking down the aisle towards her beloved. Her little loitering is not to adjust her tresses or smooth away the folds of her gown. She postpones her grand entry to ensure her beloved’s anticipation is heightened. She defers her arrival to deepen his love and increase his longing to be one with her.

But what if the bridegroom were to delay his coming? What tantrums and tears would follow! What grief and distress would be displayed! Would she wait a minute, an hour, a week, a month for the one she loves so dearly? Would she wait a year with increased expectancy to fall into his loving embrace? Would disinterest seep into her longing to be with him? Would irritation remove the pain of being apart from him? Would she seek after others to woo her or be lulled into some narcotic sleep?

Such thoughts may raise the eyebrows or bring a wry smile to the face, and yet we are told: while the bridegroom tarried, they all slumbered and slept.” This caused Jesus to ask: Could ye not watch with Me one hour….?  Scripture most certainly does imply a tarrying of heavenly Bridegroom, yet it’s the wicked servant who says in his heart, my Lord delays His coming. This attitude receives the rebuke from the Lord in the Olivet parable that tells of His return. Though tarrying is indeed implied in these two conflicting example, a patient waiting and watchful readiness is the desire of the Lord – for His darling bride.