A jealous and avenging God is the LORD; The LORD is avenging and wrathful The LORD takes vengeance on His adversaries, And He reserves wrath for His enemies. 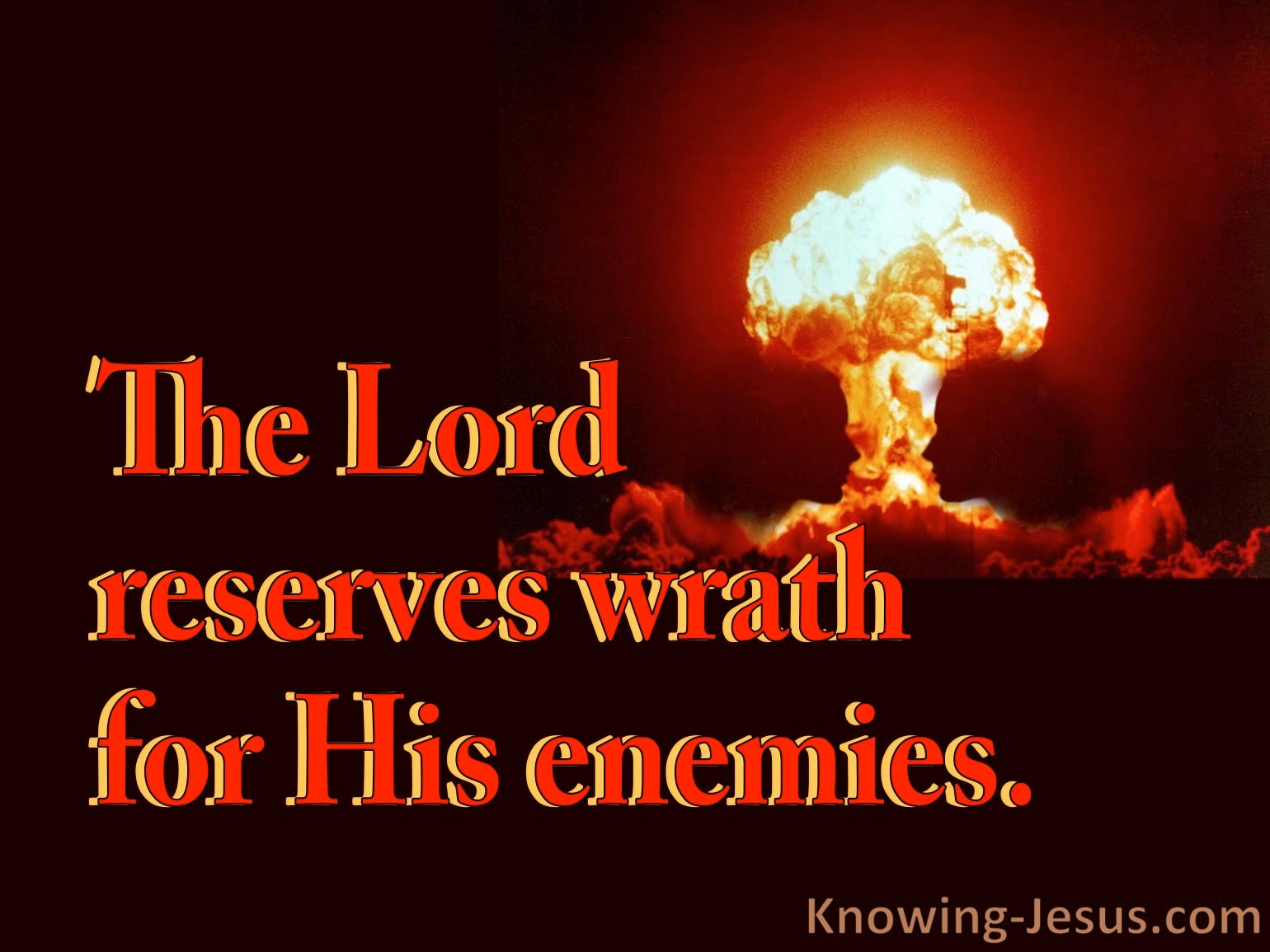 He calls his own sheep by name and leads them out.

The solid foundation of God stands, having this seal: “The Lord knows those who are His,” and, “Let everyone who names the name of Christ depart from iniquity.” § Many will say to Me in that day, “Lord, Lord, have we not prophesied in Your name, cast out demons in Your name, and done many wonders in Your name?” And then I will declare to them, “I never knew you; depart from Me, you who practice lawlessness!” § The Lord knows the way of the righteous, but the way of the ungodly shall perish.

The Purpose of God

You were running well. Who hindered you from obeying the truth? (Galatians 5:7 ESV)

Something had broken in and interrupted their running in the spiritual race. This was extremely serious and disturbed Paul to the depths of his being. It seems that in the case of the Galatians it was again the natural man, but this time in the realm of natural emotions. They seem to have been of that temperamental constitution which corresponds to Christ's words in the parable about seed falling into shallow soil. The seed was received quickly and earnestly, but did not go on to produce a harvest. There are some people who make an enthusiastic start in this way and make quite a stir about it, but then do not go steadily on. These Galatians were like that; they made a tremendous response; they loudly protested their devotion; and then they were very quick to drop out of the race. Why? Because they lived on their emotions, on their feelings, and these were changeable. This may well be a matter of temperament, but in fact something of such a characteristic can be found in most of us. We respond to an appeal, come under the power of a great emotion, and then slack off. In the words of the Lord Jesus: "When tribulation or persecution ariseth... he is offended" (Matthew 13:21).

Clearly, then, if you and I are going to persevere to the end we must have a greater power than that of our natural emotional life. The only hope is that it may be true of us, as of Paul: "The love of Christ constraineth" (2 Corinthians 5:14). There is all the difference between the natural and the spiritual in this matter of the energy of love. This word translated 'constraineth' is the same one used over the arrest of Jesus when it says: "the men that held Jesus" (Luke 22:63). So it is that the love of Christ should hold or grip us, conquering our natural emotions by the mighty power of the Spirit. Our feelings come and go. They may be strong at times but they can also grow very weak. If we do not know something of the mighty grip of Christ's love, we will never go right through to the end of this strenuous race. After all it is the love of Christ which makes for the fullness of Christ. If we finally come to that fullness it can only be by the constraint and holding power of His love. "Ye were running well: who did hinder you?" The answer is, "You ran in the strength of your own emotions, you ran as your enthusiastic response to God's call because it affected your feelings for the time." The letter to the Galatians is devoted to emphasizing the place of the Holy Spirit in the life of the believer, for He alone can supply the necessary energy of love for us to go on running well.

His Way And Time

That ye might walk worthy of the Lord unto all pleasing, being fruitful in every good work, and increasing in the knowledge of God" (Col. 1:10).

When once we see and accept our Father's purpose for our lives to the extent that it becomes our will also, the time and details of His process cease to matter. "Thy will be done" (Lk. 11:2).

"It is the knowledge of the Lord Jesus that matures the soul. Our Father chooses His opportunities to teach us these things, and when He has accomplished this work the special communications of His wisdom and love no longer continue, for He desires we should walk by faith, according to what we know we possess in the Lord Jesus. Hence our path is in company with a Christ much better known, and in much closer communion with Him.

"After receiving the instruction, we have to return to the ordinary activity of a life of responsibility, and to those relationships with our brethren in which love is developed and exercised, as it is put to the proof, either in the assembly or in individual relationships."

"Patience is the secret of it all. We want to hurry God sometimes, but we never can. We find this at times in the desire for restoring a soul - a right thing to want, but God must first go to the bottom.

"Patience requires thorough confidence in God. He is working His own purposes meanwhile, but I must follow Him, not go before Him. If I am strengthened. . . unto all patience,' I shall be long-suffering toward others."

"Strengthened. . . according to His glorious power, unto all patience and longsuffering" (Col. 1:11).

The Mystery of Believing

By the miracle of Redemption Saul of Tarsus was turned in one second from a strong-willed, intense Pharisee into a humble, devoted slave of the Lord Jesus.

There is nothing miraculous about the things we can explain. We command what we are able to explain, consequently it is natural to seek to explain. It is not natural to obey; nor is it necessarily sinful to disobey. There is no moral virtue in obedience unless there is a recognition of a higher authority in the one who dictates. It is possibly an emancipation to the other person if he does not obey. If one man says to another - 'You must,' and - 'You shall,' he breaks the human spirit and unfits it for God. A man is a slave for obeying unless behind his obedience there is a recognition of a holy God. Many a soul begins to come to God when he flings off being religious, because there is only one Master of the human heart, and that is not religion but Jesus Christ. But woe be to me if when I see Him I say - I will not. He will never insist that I do, but I have begun to sign the death warrant of the Son of God in my soul. When I stand face to face with Jesus Christ and say - I will not, He will never insist; but I am backing away from the recreating power of His Redemption. It is a matter of indifference to God's grace how abominable I am if I come to the light; but woe be to me if I refuse the light (see John 3:19-21).

The Eternal Plan - Character and Attributes of God (24)﻿

God did a new thing. God created man to be His representative on earth. But ADAM, the created son of God sinned, and man lost fellowship with God – and the glory departed. And the gate into fellowship with God was barred, when Adam rebelled against his God.. but God loves man.

And God had a plan: a remnant –Seth – Enoch – Noah – Abraham – ISRAEL. God did a new thing. God created Israel to be His representative on earth. But Israel, the adopted son of God sinned, and Israel lost fellowship with God. And the glory of God departed from the temple, and communion was severed, when Israel rebelled against her God.. but God loves Israel.

And God had a plan: a remnant -Abraham – Israel – David – Mary – JESUS. God did a new thing. God sent His only begotten Son to represent Himself on earth. But sinful man, created in God’s image, rejected His plan of salvation. And rebellious Israel, adoptive son of God, crucified the Lord of glory.

So God created the Church to be His representative on earth. God created a new Body to be the Temple of His residence – and God chose to live forever within that Body of believers in Christ.

A Body was made, and the Church was created.. the new man in Christ was born. The temple of God started to be built.. living stone upon living stone.

But as year succeeded to year, the Church left their first love. Despite the indwelling Spirit, the old sinful

Adam was created in the image and likeness of God, but sin damaged that likeness when he believed the lie and deceit of the enemy and Adam rebelled against God. And since that first sin of disobedience, which caused all humanity to be imputed with a sin nature, there has only been one man who lived in the image and likeness of God – one man who lived as God intended that man should live – in total dependence upon Him.

For thirty-three years the Lord Jesus walked this earth and lived as God intended man to live. Throughout His life Jesus lived a normal life.. a perfect life – the sort of life that God intended all men to live. Jesus lived His life in complete submission to the Father and in total dependence upon His God – led by the Spirit of God.

God is Spirit and no man has seen God at any time, and yet the invisible God has declared Himself in the Person and work of the Lord Jesus Christ. And Jesus revealed the invisible God and made Him known to a lost world. The unique and only begotten Son of God, Who from eternity past was in the intimate presence of the Father, and resting on His bosom declared Him – revealed Him, interpreted Him. and made Him known.

God in His grace and wisdom chose to come to earth, in the person of the incarnate Son of God. He clothed Himself with our humanity and lived His life as a perfect man. God in His wisdom and grace chose to be born as a man and to behave throughout His lifetime as God intended man to live. And for 33 years Jesus demonstrated the life God created man to live – dependant upon God, and only saying and doing the perfect will of God.

The eternal Son of God willingly emptied Himself of His glory as God, and humbly clothed Himself in the flesh of humanity, in order to live His life

She has done what she could.

This poor widow has put in more than all. § Whoever gives you a cup of water to drink in My name, because you belong to Christ, assuredly, I say to you, he will by no means lose his reward. § If there is first a willing mind, it is accepted according to what one has, and not according to what he does not have.

Let us not love in word or in tongue, but in deed and in truth. § If a brother or sister is naked and destitute of daily food, and one of you says to them, “Depart in peace, be warmed and filled,” but you do not give them the things which are needed for the body, what does it profit? § He who sows bountifully will also reap bountifully. So let each one give as he purposes in his heart, not grudgingly or of necessity; for God loves a cheerful giver.

When you have done all those things which you are commanded, say, “We are unprofitable servants. We have done what was our duty to do.”