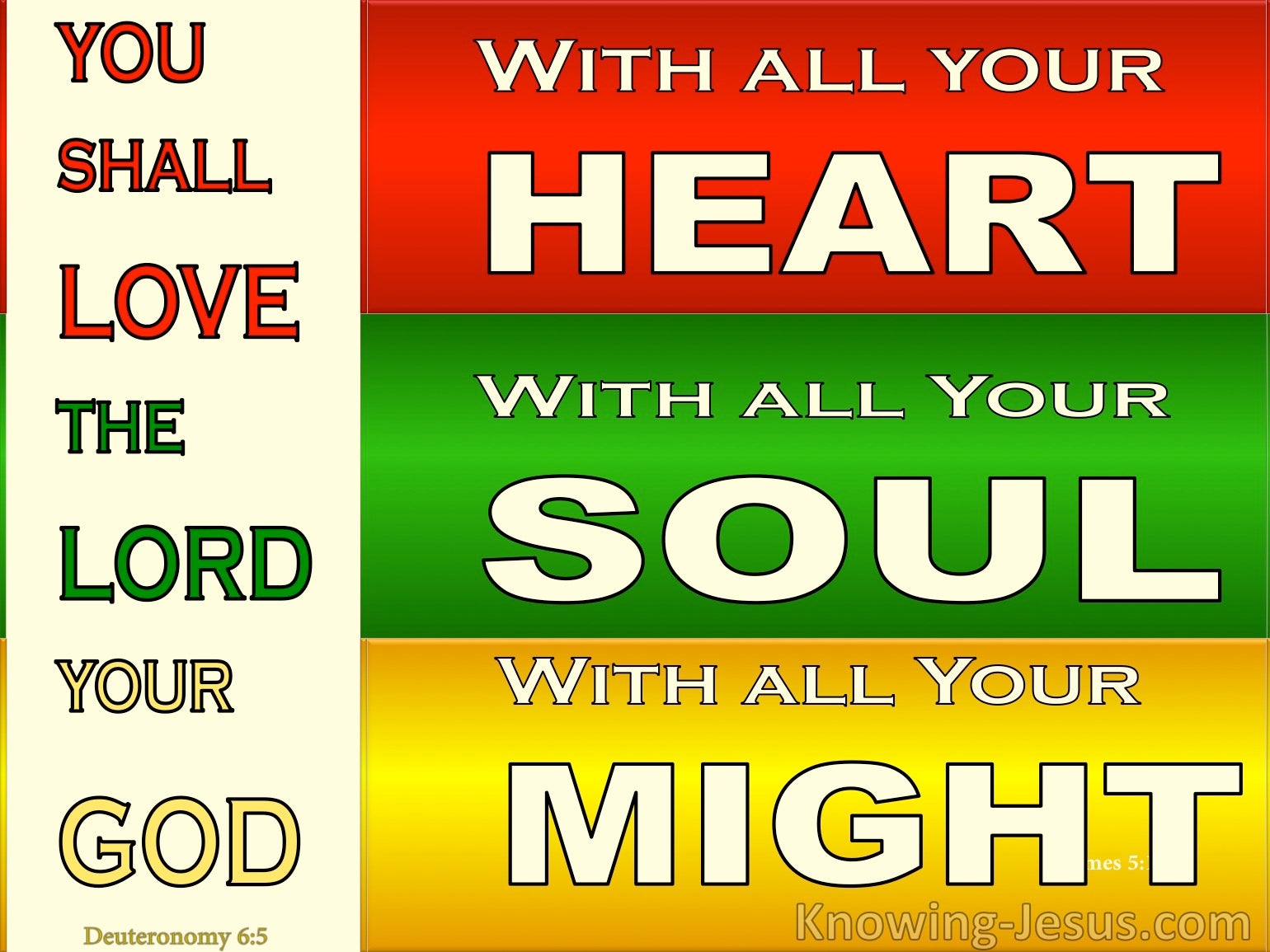 I have been crucified with Christ; it is no longer I who live, but Christ lives in me. (Galatians 2:20)

Christ is not a second personality or power, to come along to reinforce us, to vivify us, to strengthen us, for us to use in life and in service, and that He should make us something. That is not the thought, and that is not the angle of Scripture at all. And yet, how almost universally, perhaps largely unconsciously, that is what is happening. Christians are wanting to be made something, even as Christians; and Christian workers and the Lord's servants are, though perhaps unwittingly, wanting to be made something as workers; and they want Christ to reinforce them, come behind them, and make them something as His servants and in His service. That whole system of things is diametrically opposed to the truth. The truth is that Christ shall be All, and that we decrease that He may increase; that He should be the primary Personality, and that the impact and registration of any life and any service should not be: "What a good man he was!" or "What a good woman she is!" or "What a fine worker!" but: "What a presence of Christ! What a testimony to Christ! What an expression of Christ! What a sense of Christ! What a reality of Christ!"

Are our hearts set upon God having that which is wholly of Himself? That means "I" crucified! No longer I, but Christ! And that means that Christ in us is the basis of our conformity to His image, until we partake with Him of His own nature pure gold. It is something to face seriously before Him. It brings to us a challenge, but surely it also brings to us a glorious possibility! What Christ is can be made good in us!

He has prepared a city for them.

If I go and prepare a place for you, I will come again and receive you to Myself; that where I am, there you may be also. § An inheritance incorruptible and undefiled and that does not fade away, reserved in heaven for you. § Here we have no continuing city, but we seek the one to come.

This same Jesus, who was taken up from you into heaven, will so come in like manner as you saw Him go into heaven. § Therefore be patient, brethren, until the coming of the Lord. See how the farmer waits for the precious fruit of the earth, waiting patiently for it until it receives the early and latter rain. § You also be patient. Establish your hearts, for the coming of the Lord is at hand. § Yet a little while, and He who is coming will come and will not tarry.

We who are alive and remain shall be caught up together with them in the clouds to meet the Lord in the air. And thus we shall always be with the Lord. Therefore comfort one another with these words.

Do not be deceived. Neither fornicators, nor idolaters, nor adulterers, nor homosexuals, nor sodomites, nor thieves, nor covetous, nor drunkards, nor revilers, nor extortioners will inherit the kingdom of God. And such were some of you. But you were washed, but you were sanctified, but you were justified in the name of the Lord Jesus and by the Spirit of our God.

You He made alive, who were dead in trespasses and sins, in which you once walked according to the course of this world, … among whom also we all once conducted ourselves in the lusts of our flesh, fulfilling the desires of the flesh and of the mind.

According to His mercy He saved us, through the washing of regeneration and renewing of the Holy Spirit, whom He poured out on us abundantly through Jesus Christ our Savior.

“For My thoughts are not your thoughts, nor are your ways My ways,” says the Lord.

That I may apprehend that for which also I am apprehended of Christ Jesus" (Phil. 3:12).

Our spiritual puppy-love is soon lost, to be replaced through the years by our bridal-love. The bride always gravitates to her Bridegroom. "My beloved spoke, and said unto me, Rise up, my love, my fair one, and come away" (SoS. 2:10).

"All of our Father's arrangements for us, if rightly accepted, will lead us above, instead of binding us to what is here below. His gifts come down to ease us in a world like this, that our hearts may rise the easier to the scene where He displays the fulness of His love for us.

"And if there be chastening in the circumstances here, it is only to detach us the more effectively from all here, and to lead us to the place where He has given all to us. So that seeing the things above ensures every good thing for us in every condition."

"The Lord grant that you may know the wonderful blessing, and portion of light and joy we are brought into, instead of going through the world trying to overcome this and that, and saying, I must give up this thing and the other.' It is not a question of giving up at all; but I have something better, greater, brighter, and I just let it drop."

"Yea doubtless, and I count all things but loss for the excellency of the knowledge of Christ Jesus, my Lord" (Phil. 3:8).

Quench Not The Spirit

The voice of the Spirit is as gentle as a zephyr, so gentle that unless you are living in perfect communion with God, you never hear it. The checks of the Spirit come in the most extraordinarily gentle ways, and if you are not sensitive enough to detect His voice you will quench it, and your personal spiritual life will be impaired. His checks always come as a still small voice, so small that no one but the saint notices them.

Beware if in personal testimony you have to hark back and say - "Once, so many years ago, I was saved." If you are walking in the light, there is no harking back, the past is transfused into the present wonder of communion with God. If you get out of the light you become a sentimental Christian and live on memories, your testimony has a hard, metallic note. Beware of trying to patch up a present refusal to walk in the light by recalling past experiences when you did walk in the light. Whenever the Spirit checks, call a halt and get the thing right, or you will go on grieving Him without knowing it.

Suppose God has brought you up to a crisis and you nearly go through but not quite, He will engineer the crisis again, but it will not be so keen as it was before. There will be less discernment of God and more humiliation at not having obeyed; and if you go on grieving the Spirit, there will come a time when that crisis cannot be repeated, you have grieved Him away. But if you go through the crisis, there will be the pæan of praise to God. Never sympathize with the thing that is stabbing God all the time. God has to hurt the thing that must go.

The Perfections of God

You are.. God’s OWN possession, so that you may proclaim the excellencies of Him.
1 Peter 2:9

God’s characteristics, display the fullness of His divine essence and His attributes are the sum total of His many perfections, which begin to be unveiled in the Scriptures. We discover God’s infinite love, justice, mercy and grace. We see His eternal holiness, righteousness, sovereignty and immutability.

We see His omnipotence, omniscience and omnipresence – all of which are gradually unveiled in the Bible. We discover the love and mercy of a holy God Who took steps to save a fallen race that was lost in trespasses and sins – we see the scarlet thread of redemption streaming down through the pages of holy writ to condemned humanity.

God laid a treasure trail of discovery throughout His Word where all His perfections are laid bare to the one who has eyes to see, ears to hear, and a will to believe. And Peter makes reference to this in his first epistle, when he reminds the Church: but ye are a chosen generation; a royal priesthood; an holy nation; a peculiar people; that ye should show forth the PRAISES (arete) of Him Who hath called you out of darkness into His marvellous light.

The Greek word arete, which is translated praises really means PERFECTIONS. God’s characteristics show forth the moral excellence of the almighty, eternal God and we as believers are called to show forth His many perfections – His moral excellence.

The Church, which is the body of Christ, has been called and commissioned to display the many virtues and divine perfections of God, to a lost and dying world. But the world, which is lying in the evil one, is blind and deaf to the virtues of their gracious Creator and His love for His creation. So God called out a people for His own possession… He called out the Church, so that we might proclaim the excellencies of Him Who has called us out of darkness into His marvellous

Is your ‘old man’ crucified on the cross? Is your ‘old sin nature’ nailed to the tree? Are you allowing the ‘new man in Christ‘ to be daily conformed into His image? But, oh dear! How often our old sin nature climbs down from that crucified position. How much it pretends to take on attributes that should be developed in the new man. Self’ disguises itself in the likeness, pretence, and mask of the ‘new man’ in Christ. Others may be fooled by this little cloak of pretence – this masked covering of deceit, but God Who knows the heart is not fooled, and 'Self' will never be conformed into His image.

Idolatry isn’t just a problem for non-believers. Idolatry is a stumbling block for Christians too. Idolatry is trusting something smaller than God, to give your life significance. Idolatry is anything we trust in for deliverance, in the place of Jesus and His grace. Idolatry is the spirit of antichrist – exhibited in 'Self'.

Placing 'Self' on the throne of our lives is not a new concept – it was born in Eden. It is the carnal human heart trying to build an identity around something other than God. Nothing can ever remove us from the love of God which is In Christ Jesus – nothing, but we can either choose to remain in constant fellowship