Forgive us our debts, as we forgive our debtors.

Lord, how often shall my brother sin against me, and I forgive him? Up to seven times?” Jesus said to him, “I do not say to you, up to seven times, but up to seventy times seven.” § “You wicked servant! I forgave you all that debt because you begged me. Should you not also have had compassion on your fellow servant, just as I had pity on you?” And his master was angry, and delivered him to the torturers until he should pay all that was due to him. So My heavenly Father also will do to you if each of you, from his heart, does not forgive his brother his trespasses. § Be kind to one another, tenderhearted, forgiving one another, even as God in Christ forgave you. § You … He has made alive … having forgiven you all trespasses, having wiped out the handwriting of requirements that was against us … He has taken it out of the way, having nailed it to the cross. § Even as Christ forgave you, so you also must do. 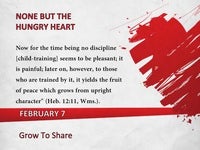 Grow To Share
Have You Considered Leviathan? (JOB-study 17)
The Highest Love