The Good News of the Gospel

All have missed the mark – all are separated from God – all are sinners to the core. All are spiritually dead. All are without hope and without God in a world of sin. This is not only the condition of those we consider wicked and deserving of death. This is equally true of you and me. It is the condition of the lovely girl next door, too. For all have sinned and fall short of the glory of God, and the wages of sin, for all is death.

Paul knew that physical death meant separation – for he told the Corinthians: to be absent from the body, is to be present with the Lord. He also knew that spiritual death which is caused by sin, means separation from God: They are excluded from the life of God because of ignorance and hardness of heart. Men are separated from God and life, because of pride and the blindness of their heart. He who has the Son has life. He who doesn’t have the Son of God does not have life.

The day Adam sinned in the garden he died spiritually. He was separated from God. His body lived and breathed for many centuries, but spiritual death had occurred. Indeed, if this state of spiritual death continues to the point of physical death..  man is separated from God forever, in the lake of fire – a sombre thought indeed. But every man, from Adam on, can choose spiritual life rather than spiritual death. There are none who are excluded by God from the good news of His gospel of grace.

Re-union with God requires the death of Another – and until Christ’s blood streamed from His veins at Calvary, the blood of an innocent lamb was to cover sin-stained man. But at the chosen time God sent forth His Son, born of a woman, born under the Law – to redeem those who were under the law, so that we might receive adoption as sons.

There is also a specific work – that Jesus Christ undertook for our Salvation. Christ died for our sins and the proof of His death was that He was buried for 3 days. He also rose again and the proof of His resurrection was that He was seen for 40 days. But there’s more – His cross-work resulted in a specific accomplishment for all men. He identified with man and died for mans’ sins and took the punishment man deserved. He became sin for us – He became our substitute sacrifice, to satisfy the justice of God. And there is even more – the gospel requires a specific response from EVERY man – and we are to believe that a specific person undertook a specific work to accomplish a specific result so that all who believe could be specifically saved.

We are to rely on His work on the cross to save us from sin and death and hell. We are to depend on His finished work as sufficient to reunite us with a holy God. We’re to trust in Him alone – to have faith alone in Christ alone and what He did for us. This is the good news of the gospel of grace which centres on Christ’s finished work on the cross – and the fact that He rose from the dead to accomplish our full salvation.

Without His death on the cross, our sins would not have been atoned for and we would remain unforgiven sinners – dead in our sins and separated forever from a holy God. And without His resurrection, we would not have a living Saviour – for, without a living Saviour, death would not have been conquered – and we would remain spiritually dead. There is the good news of the gospel and there is the bad news of the gospel too. Let us rejoice that God in His love sent a specific person to do a specific work which resulted in a specific accomplishment – and simply requires a specific response. 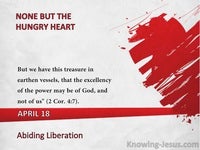