For the overseer must be above reproach as God's steward, not self-willed, not quick-tempered, not addicted to wine, not pugnacious, not fond of sordid gain, 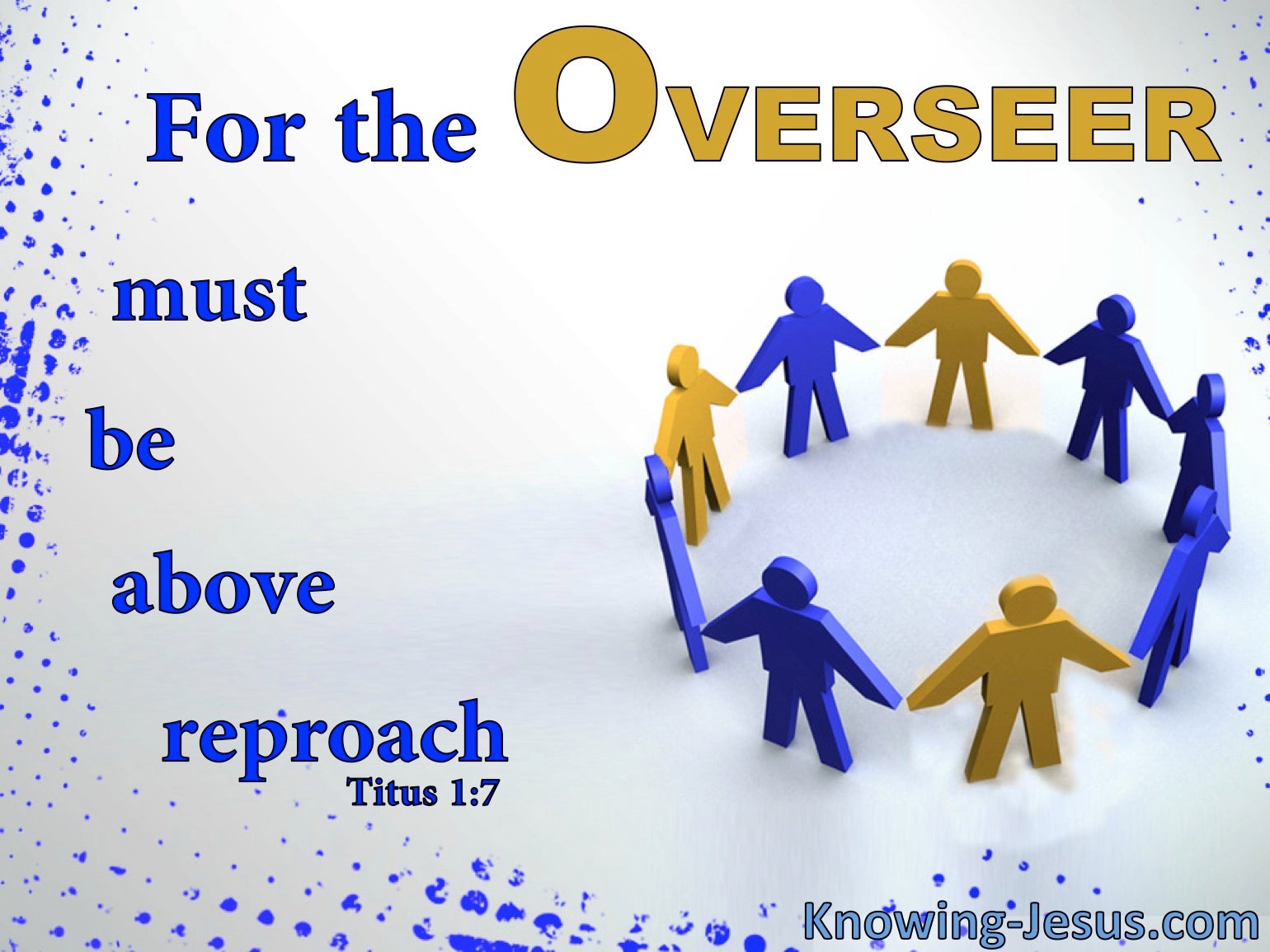 The Meaning of Christ

Everything was created through Him and for Him. (Colossians 1:16 NLT)

The key to everything with God is Life.... We must realize that Christ's ascendancy, supremacy, power, ability and all that goes with Headship, is in terms of His prerogative of Life. He is the Son, vested with Life; He has the right given Him of God to give Life to as many as believe. That is why He is Head. You can set up people in office and make Popes of them and they may make great claims, but what does it amount to? When you come up against death, what can they do? But bring in one who has the power of life over death, be he ever so humble on this earth, he is head, he is master, he is lord. You may bring all the greatest physicians that the world knows into the presence of death, and when death takes charge, they are helpless. But supposing you bring in a little, insignificant person who is nobody, with no capabilities whatever in this world, no training, and that one be invested with the power of life over death, he rules out all these others, they are as nothing in his presence, he is lord of the situation.

Christ is Head, not just by appointment, but in terms of Life. We may be very insignificant people on this earth, nothing at all to be taken account of by the world, but if only we have Christ in fullness of Life we are in a supreme position, we make all the great organizations and institutions as nothing. It is a spiritual thing, the impact of Christ; not tradition, not history, not theology, but the spiritual power of His presence in terms of Life through faith and righteousness.

May your whole spirit, soul, and body be preserved blameless at the coming of our Lord Jesus Christ.

Christ … loved the church and gave Himself for her, … that He might present her to Himself a glorious church, not having spot or wrinkle or any such thing, but that she should be holy and without blemish. § Him we preach, warning every man and teaching every man in all wisdom, that we may present every man perfect in Christ Jesus.

May our Lord Jesus Christ Himself, and our God and Father, who has loved us and given us everlasting consolation and good hope by grace, comfort your hearts and establish you in every good word and work. § [God] will also confirm you to the end, that you may be blameless in the day of our Lord Jesus Christ.

Will God indeed dwell with men on the earth?

You have ascended on high, You have led captivity captive; You have received gifts among men, even from the rebellious, that the Lord God might dwell there.

You are the temple of the living God. As God has said: “I will dwell in them and walk among them. I will be their God, and they shall be My people.” § Your body is the temple of the Holy Spirit who is in you, whom you have from God. § You also are being built together for a dwelling place of God in the Spirit.

The nations also will know that I, the Lord, sanctify Israel, when My sanctuary is in their midst forevermore.

He has created us through our union with Christ Jesus for doing good deeds which He beforehand planned for us to do" (Eph. 2:10, Wms.).

The turning point in our Christian life comes when we begin to "let God be God," the day we throw all caution (fear) to the winds and look to Him to carry out His purpose for us in His own time and way.

"Our Father never does a thing suddenly: He has always prepared long, long before. So there is nothing to murmur about, nothing to be proud of, in the calling of God. There is also no one of whom to be jealous, for other people's advantages have nothing to do with us. It is not of him that willeth, nor of him that runneth, but of God that hath mercy' (Rom. 9:16). Our heritage, our birth, our natural equipment: these are things already determined by God. We may pick up other things in the way, for we are always learning; but the way is His way. When we look back over our life, we bow and acknowledge that all was prepared of God. To have such an attitude of heart, that is true rest." -W.N.

"Let us take care lest we get out of soul-rest in seeking further blessing. God cannot work whilst we are anxious, even about our spiritual advance. Let us take Him at His Word, and leave the fulfillment of it to Him."

"For it is God Himself whose power creates within you the desire to do His gracious will and also brings about the accomplishment of the desire" (Phil. 2:13, Wey.).

This verse is the grandest condensation of the propaganda of a disciple of Jesus Christ in the whole of the New Testament.

The first sovereign work of grace is summed up in the word - "that they may receive remission of sins." When a man fails in personal Christian experience, it is nearly always because he has never received anything. The only sign that a man is saved is that he has received something from Jesus Christ. Our part as workers for God is to open men's eyes that they may turn themselves from darkness to light; but that is not salvation, that is conversion - the effort of a roused human being. I do not think it is too sweeping to say that the majority of nominal Christians are of this order; their eyes are opened, but they have received nothing. Conversion is not regeneration. This is one of the neglected factors in our preaching today. When a man is born again, he knows that it is because he has received something as a gift from Almighty God and not because of his own decision. People register their vows, and sign their pledges, and determine to go through, but none of this is salvation. Salvation means that we are brought to the place where we are able to receive something from God on the authority of Jesus Christ, i.e., remission of sins.

Then there follows the second mighty work of grace - "and inheritance among them which are sanctified." In sanctification the regenerated soul deliberately gives up his right to himself to Jesus Christ, and identifies himself entirely with God's interest in other men.

Resting In Him (Easter Reflections - (10)

7th word from the cross

And it was about the sixth hour, and there was a darkness over the earth until the ninth hour. And the sun was darkened, and the veil of the temple was rent in the midst. And when Jesus had cried with a loud voice – (Telelestai – Finished), He said: "Father, into Thy hands I commend My spirit", and having thus said, He gave up the ghost. Now when the centurion saw what was done, he glorified God, saying, "Certainly this was a righteous man".
Luke 32: 44-46

Here Christ’s is the last utterance fell from the lips of the Lord Jesus. Here - the point that our salvation was procured. Here His life’s mission is fully accomplished. Here the seventh word of completion from the Saviour is spoken. Here is the last word from the wooden tree – the cross of Calvary.

Christ’s redeeming work was completed with the triumphant cry, "It it finished". He has emerged from the dark tunnel of unspeakable separation. Separation of the Son of His love from His beloved Father. He had finished the work that Father had gave Him to do – an obedient Son. His gruelling work on the cross for our redemption was finished and so He said, "Father, into Thy hands, I commend My spirit".

Man had done what they could to this sinless One. Evil man had done its vilest worst and hung Him on the cross to die. Wicked Satan did what he could against Jesus.. the incarnate God, but His was the final Victory. His is the Power and His is the Kingdom for His is the Majesty and His the Glory for ever and ever, amen –  for God raised Him from the dead, forever. He had drunk of the bitterest cup that God, His Father willed. Forgiveness has been procured for all mankind who would believe, and He could now say, "Father, into Thy hands I commend My spirit".

He bowed His head and offered His

The Arm of Love

And this is My commandment – that you love one another  as I have loved you.
John 15:12

Reach Out To Others

Never let one day pass when you have not reached out the arm of love to someone.

Stretch out His arm of love to someone through your arm of love. Shine a ray of sunlight in every smile; every word; every deed; every prayer; every act of kindness; every trifling service; every listening ear; every gift – every little encouragement.

Reach Out In Love

Let it be done in love. "Love as I have loved".  and let it be full of joy "for the joy of the Lord is my strength". Every day lift another soul out of the sea of sin; of doubt; of disease; of fear. A helping hand is often needed, to raise the helpless to courage; to faith;  to patience; to endurance; to hope – to love.

Reach Up To God

Refuse to be checked in your upward climb. Refuse to be downcast in your forward journey. "Cast all your burdens on Him", and help others to carry theirs. How many burdens can you carry for others, in His love? How many loads can you help to lighten, with His joy? How many souls can you encourage to press on to the end?  In giving love and in sharing joy, you too will gain... "good measure, pressed down, shaken together and running over". "Love as I have loved….."