For they all seek after their own interests, not those of Christ Jesus. 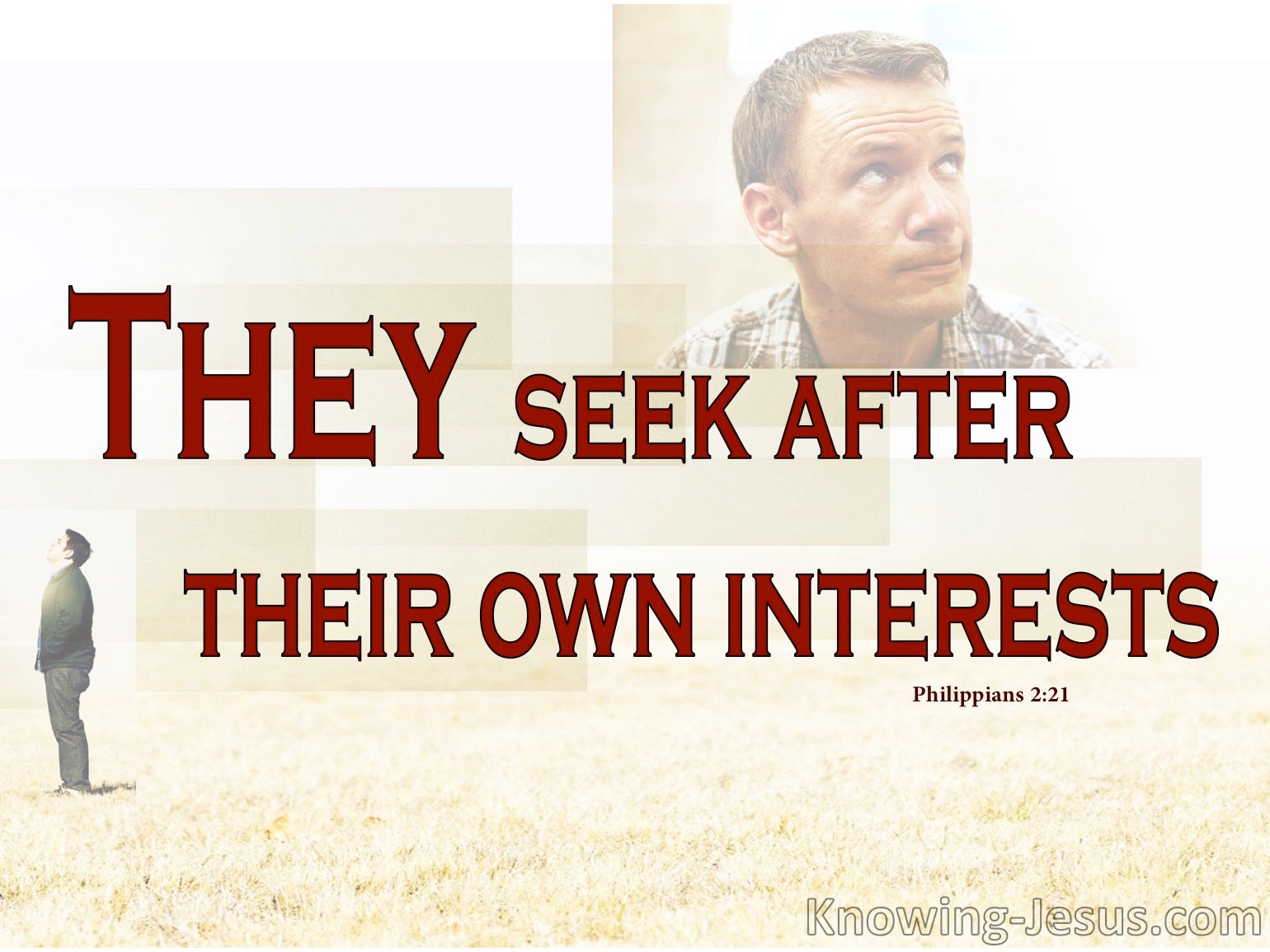 I have forgiven in the sight of Christ for your sake, in order that Satan might not outwit us. For we are not unaware of his schemes. (2 Corinthians 2:10,11 NIV)

Perhaps one of the most significant things to any who are ot ignorant of his (Satan) devicesis that there never has been a specially spiritual movement of God in the earth, calculated to serve Him in a particularly useful way, but what Satan animosity thereto has been manifested along the line of division, schism, discord, separation, and a breaking down of fellowship. And how often has the real sting and stigma been modified by a feigning love unbroken and preserved, when the divided parties should have no association with each other in the things of God. Love, let us again say emphatically, is incumbent upon the Lord people toward ll men,whether of the ouseholdor otherwise (Gal. 6:10), but fellowship is something more. It is the most spiritual things which suffer the greatest shocks in this matter, and again we say this carries its own satanic significance.

The methods of the enemy are numberless, the ilesunfathomable by human wit. A suggestion of suspicion, if it finds lodgment, is enough to completely paralyze the work of God and spiritual progress. Have a doubt and you are done. There never was a time when positive spiritual work was more jeopardized by suspicion than now. It would seem that hell is largely employed in issuing forth smoke, clouds, vapors, mists of suspicion, question, reservation, in order to infect with uncertainty, mystification, prejudice, fear, discrediting, distrust, aloofness. It is in the eavenliesthat this is most registered; that is, the higher ranges of spiritual things. It is an atmosphere, and it is everywhere. You sense it wherever you go. In some places it is stifling there is no clear breath of the Spirit, and a word of Life is almost choked back. Of course, this is no new thing, although now so intensified. The New Testament is full of it. The Lord Jesus met it not in spiritual people, only in religious people. John met it. Paul met it in every direction. It was made to circle round his person, his methods, his character, and his message.

One of the soldiers pierced His side with a spear, and immediately blood and water came out.

This is the blood of the covenant which the Lord has made with you. § The life of the flesh is in the blood, and I have given it to you upon the altar to make atonement for your souls. § It is not possible that the blood of bulls and goats could take away sins. § And He said to them, “This is My blood of the new covenant, which is shed for many.” § With His own blood He entered the Most Holy Place … having obtained eternal redemption. § Peace through the blood of His cross. § You were not redeemed with corruptible things, like silver or gold … but with the precious blood of Christ, as of a lamb without blemish and without spot … manifest in these last times for you.

Then I will sprinkle clean water on you, and you shall be clean; I will cleanse you … from all your idols. § Let us draw near with a true heart in full assurance of faith, having our hearts sprinkled from an evil conscience.

Amen! May the Lord God … say so too. § He who blesses himself in the earth shall bless himself in the God of truth; and he who swears in the earth shall swear by the God of truth. § When God made a promise to Abraham, because He could swear by no one greater, He swore by Himself … For men indeed swear by the greater, and an oath for confirmation is for them an end of all dispute. Thus God, determining to show more abundantly to the heirs of promise the immutability of His counsel, confirmed it by an oath, that by two immutable things, in which it is impossible for God to lie, we might have strong consolation, who have fled for refuge to lay hold of the hope set before us.

These things says the Amen, the Faithful and True Witness. § For all the promises of God in Him are Yes, and in Him Amen, to the glory of God through us.

Blessed be the Lord God, the God of Israel, who only does wondrous things! And blessed be His glorious name forever! … Amen and Amen.

Resting in His glory there will manifest His humility in us here.

"Our hearts have such a tendency to turn back to legalism, and to think it humility. The only real humbleness and strength and blessing is to forget ourselves in the presence and blessedness of the Father. We may be brought thither by a humbling process but it is not in merely thinking evil of the old man that we are truly humble; we have the privilege of forgetting ourselves in the love of our Father." -J.N.D.

"It is as knowing the Lord Jesus to be precious to our souls, with our eyes and hearts being occupied with Him, that we will be effectually kept from being taken up with the vanity and sin around. And this too will be our strength against the sin and corruption within. Whatever I see in myself that is not in Him, is sin. It is not in thinking upon my own sins that will humble me, but thinking of the Lord Jesus and dwelling upon the excellencies in Him.

"Many think that talking badly of ourselves is the ideal of humility; whereas the simplest and more real humility is to feel unaffectedly that we are too bad to be worth talking about. Only One is worthy of all our thoughts and words and ways, even the Lord Jesus Christ." -W.K.

"Humble yourselves, therefore, under the mighty hand of God, that He may exalt you in due time" (1 Pet. 5:6).

The Key to Missionary Devotion

Our Lord has told us how love to Him is to manifest itself. "Lovest thou Me?" "Feed My sheep" - identify yourself with My interests in other people, not, identify Me with your interests in other people. 1 Corinthians 8:4-8 gives the character of this love, it is the love of God expressing itself. The test of my love for Jesus is the practical one, all the rest is sentimental jargon.

Loyalty to Jesus Christ is the supernatural work of Redemption wrought in me by the Holy Ghost Who sheds abroad the love of God in my heart, and that love works efficaciously through me in contact with everyone I meet. I remain loyal to His Name although every common-sense fact gives the lie to Him, and declares that He has no more power than a morning mist.

The key to missionary devotion means being attached to nothing and no one save Our Lord Himself, not being detached from things externally. Our Lord was amazingly in and out among ordinary things; His detachment was on the inside towards God. External detachment is often an indication of a secret vital attachment to the things we keep away from externally.

The loyalty of a missionary is to keep his soul concentratedly open to the nature of the Lord Jesus Christ. The men and women Our Lord sends out on His enterprises are the ordinary human stuff, plus dominating devotion to Himself wrought by the Holy Ghost.

The Loveliness Of Jesus

He is altogether lovely.
Song of Solomon 5:16

There have been many people who have sought to discredit the person of Christ, and many have accused the Word of God of inconsistencies – many that deny its truth. There are many that call themselves atheists, who have used the Bible to prove the instability of the gospel and the flawed nature of Christ – who have turned around.

There is talk of one brilliant Brahmin scholar who was determined to bring the person of the Lord Jesus into disrepute and who spent the best part of eleven years searching Scripture to highlight the weakness of the person of Christ and the failings of His beautiful character and moral perfection – only to be brought to his knees, in faith.

Even those who pride themselves on being intellectually superior to those who trust Christ as Saviour are happy to applaud the Lord Jesus as a good and a gracious man. All who take time to study the disposition and character of Christ discover Him to display perfection throughout His lifetime and grace in all circumstances of His life.

His character is applauded by religious and political leaders alike and many of the words He used and the principles He introduced have been gathered together like a string of pearls, to adorn their own manmade creed or their singular personal mindset.

He has great strength of character and displayed an unsurpassed inner greatness. Indeed, it is noted by some that He had no particular strongpoints and NO weak-points, but in everything, He was faultless - perfect in strength and in stature of character.

No Fault in Him

The beauty of His character and the gracious words that fell from His lips did not prevent many from hating Him with a vengeance – but they could find no fault in Him. He was admired by men, loved by women, and had a wonderful affinity with children. His care for those that were unfairly treated became the grounds of their hatred –

Until we all come to the unity of the faith and of the knowledge of the Son of God, to a perfect man, to the measure of the stature of the fullness of Christ.” Ephesians 4:13

But while there is still breath in our mortal bodies we have a job to do. We must recognise that there is a purpose to be fulfilled each day of our lives. God is bringing each one of His children into a blessed unity of trust in Him. Each having a united confidence in the Lord. Each holding to pure scriptural truth. Just as the Lord purposed that Jew and gentile were to be one in Him – in like manner the whole Body of Christ is to be united in Him.

Unity of the saints is a foundational creed emanating from Christ’s priestly prayer:- that they may be one as We are One, I in them and You in Me— so that they may be brought to complete unity. John 17:22 And this unity is for a glorious purpose:- then the world will know that You sent Me and have loved them even as You have loved Me John 17:23

Love As He Loved

The Lord Jesus wants each of His children to be united in love – united in Him.. until we all come to the knowledge of the Son of God. For God is love and love is of God and we are to be one in Him – united in Him. We are to love as Jesus loved us – to love others as His love flows through us.

We are not only to