"The LORD is the one who goes ahead of you; He will be with you He will not fail you or forsake you. Do not fear or be dismayed." 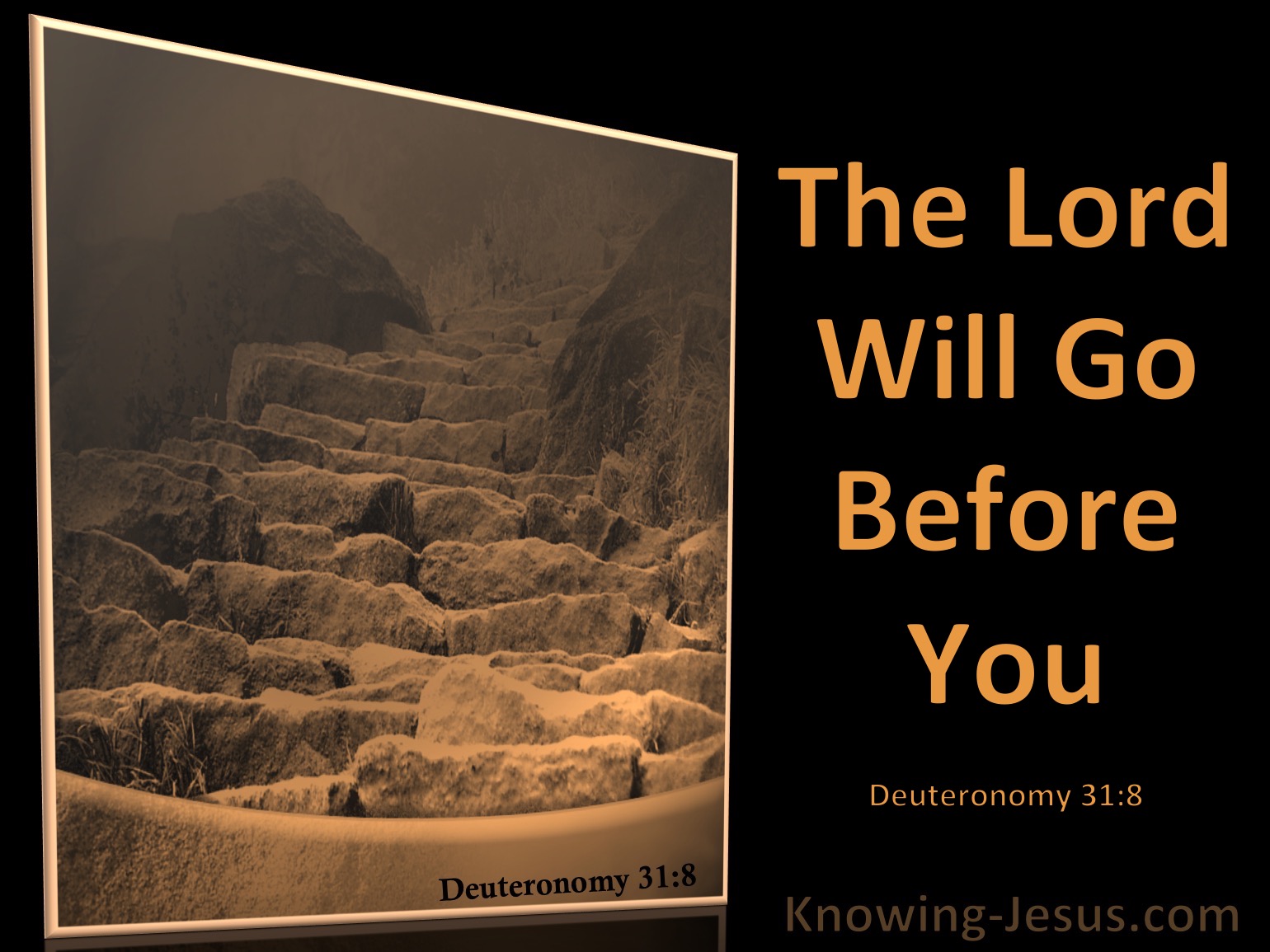 Come out of her, My people, so that you don't participate in her sins and also suffer from her diseases. (Revelation 18:4 ISV)

What is the spiritual life in the matter of worship? Oh, it is not ecclesiastical architecture, it is not vestments, it is not ordinances, and it is not rites. They pass out with Calvary; the perpetuating of anything like that is a contradiction of Calvary. See where we are today. The maintenance of that sort of thing is because of a failure to perceive what the Lord Jesus has brought in.... Why, then, perpetuate a thing which God has dismissed in the Cross and, by keeping to the lower, fail to reach the higher? Do you see where things are astray today? I know how sweeping this is, but all this has to do with worship. Now note that when there is a failure to recognize the spiritual meaning of all this and to enter into it... and maintain the old thing... you are still on a soul level, and you are open to deception; the whole thing may be a ghastly deception. And how does that deception work? In this way: that so many good Christian people are absolutely in bondage to a traditional system which is cutting clean across Divine revelation to them. It is their traditional system which is simply barring the way to spiritual revelation, whereas the Cross of the Lord Jesus represents the liberty in the spirit for God to lead into the fullness of His Life and Light.

That is the whole purpose of the Letter to the Hebrews. It was for that very purpose. Here were a people that had received light concerning the true nature of fellowship with God in Christ - that the Lord Jesus had taken the place of the Temple and the priesthood and the sacrifices and the ordinances... and even the Sabbath. Now it is no longer a matter of form, ceremony, external rites, buildings, priests, sacrifices; it is all Christ. They had seen that. The writer had called upon them to go outside the religious, formal, historic, traditional camp, and that brought persecution, ostracism, isolation, loneliness, and all manner of things. The official religious people made it very hard for them because of that. The price to be paid for what is truly spiritual and heavenly was... and is... great, and they were dangerously in peril of going back to the old thing. The Letter to the Hebrews was written just to save them from that peril and to tell them more fully about the great change that had come about in the Cross - the work of the Lord Jesus... to tell them that one system, the earthly representation, had passed and the other, the heavenly reality, had come in.... To know the Lord in Life, we must be free from the grave clothes of outward systems. Why, then, perpetuate a system? The Lord Jesus put all that away in His Cross; it is all gone.

O God, my heart is steadfast.

May the God of all grace, who called us to His eternal glory by Christ Jesus, after you have suffered a while, perfect, establish, strengthen, and settle you. To Him be the glory and the dominion forever and ever.

The Lord has established His throne in heaven,and His kingdom rules over all.

The lot is cast into the lap, but its every decision is from the Lord. § If there is calamity in a city, will not the Lord have done it?

He does according to His will in the army of heaven and among the inhabitants of the earth. No one can restrain His hand or say to Him, “What have You done?” § If God is for us, who can be against us?

He must reign till He has put all enemies under His feet. § Do not fear, little flock, for it is your Father’s good pleasure to give you the kingdom.

If we keep in mind that the Lord Jesus is our Sanctification, the seemingly difficult subject will clearly unfold for us day by day.

"Many fall into the Methodistic, or Quaker, or Pearsall-Smith scheme of sanctification - all of which is substantially the same. The true scriptural means of sanctification is that you are set apart to God. It is not at all a question of whether there is evil in your flesh, for there is a great deal. Why, that is all the old man is made of!

"But yet you are sanctified. Sanctification has nothing whatsoever to do with the extinction of evil in the flesh. That idea, begun with Pelagius, revived by Thomas a'Kempis, handed down through Jeremy Taylor, the French and Dutch mystics, Wm. Law and John Wesley, has passed into other communions where they have no notion whatever whence it came." -W.K.

"The Christian life is nothing short of the life of the Lord Jesus (Col. 3:4). It is His life reproduced in us. That the life also of Jesus might be made manifest in our mortal flesh' (2 Cor. 4:11). The common conception of sanctification is that every area of the life should be holy; but that is not holiness, it is the fruit of holiness: holiness is the Lord Jesus Christ.

"When we are conscious of pride we fancy that humility will meet our need, but the answer to pride is not humility, it is the Lord Jesus, and He is the answer to every need. The Father will not give you humility or patience or love as separate gifts of grace; He has given you the Lord Jesus, and if you simply trust Him to live out His life in you, He will be humble, patient, loving and everything else you need."

"God hath from the beginning chosen you to salvation through sanctification of the Spirit and belief of the truth" (2 Thess. 2:13).

The Witness Of The Spirit

“The Spirit Himself beareth witness with our spirit…” Romans 8:16

We are in danger of getting the barter spirit when we come to God, we want the witness before we have done what God tells us to do. "Why does not God reveal Himself to me?" He cannot, it is not that He will not, but He cannot, because you are in the road as long as you won't abandon absolutely to Him. Immediately you do, God witnesses to Himself, He cannot witness to you, but He witnesses instantly to His own nature in you. If you had the witness before the reality, it would end in sentimental emotion. Immediately you transact on the Redemption, and stop the impertinence of debate, God gives on the witness. As soon as you abandon reasoning and argument, God witnesses to what He has done, and we are amazed at our impertinence in having kept Him waiting. If you are in debate as to whether God can deliver from sin, either let Him do it, or tell Him He cannot. Do not quote this and that person, try Matthew 11:28 - "Come unto Me." Come, if you are weary and heavy laden; ask, if you know you are evil (Luke 11:13).

The Spirit of God witnesses to the Redemption of Our Lord, He does not witness to anything else; He cannot witness to our reason. The simplicity that comes from our natural common-sense decisions is apt to be mistaken for the witness of the Spirit, but the Spirit witnesses only to His own nature, and to the work of Redemption, never to our reason. If we try to make Him witness to our reason, it is no wonder that we are in darkness and perplexity. Fling it all overboard, trust in Him, and He will give the witness.

The Nature of Christ

Who, existing in the form of God, did not consider equality with God as something to be used for His own advantage. Instead He emptied Himself  by assuming the form of a slave, taking on the likeness of men.
Philippians 2:6-7

All power in heaven and on earth has been given to this unique God-Man, Christ Jesus, Who ascended to heaven, and at this moment is sitting on the Father’s throne in glory. And for 2000 years a member of the human race has been seated at God’s right hand.

Jesus has two separate natures in one body : His nature as God and His human nature. This personal union of two natures is where undiminished deity is uniquely united with true humanity, remaining together in one person forever and without confusion. This “hypostatic union” took place so that you and I might be saved from our sin.

Because Christ was conceived and born of a human mother, He is able to empathise with our human weaknesses, having been tempted in every way, like us – yet without sin. In Hebrews we read that Jesus is also the radiance of the glory of God and His exact imprint. He also upholds the universe by the Word of His power and after making purification for sins, He sat down at the right hand of the Majesty on high.

God in His wisdom and grace designed the plan of salvation before the world began. God in His love and mercy purposed to save humanity before we were even created. God the Father by His grace, loved us so much that He gave His only begotten Son so

Scarcity of the Hour

We discover that as evil multiplies, an icy coolness will replace genuine love. The wickedness in the world will cause many to lose all sense of gracious propriety. Although this is a verse that is directed to Israel, in the time of Jacob’s trouble. Paul points out that a similar demise in loving-kindness that will pervade Christendom.. and its infiltration into the church will discourage, to a point of exhausted despair,

This is both a sad and a shocking fact and one that we need to examine carefully. This is not a love associated with the world. It is not what man considers to be love. This is godly love; pure love; unselfish love; agape love. This is the love given of God – the agape, godly love of Christ in many shall wax cold. Only believers are equipped with Christ’s love. We alone have His love working in us, for it is only as Christ’s love flows through us, that His love can stream out to others, We have been commanded to love as I have loved – in the power of the Spirit.

The sad fact is that some Christians will betray and persecute their fellow believer, and a spirit of ungodliness is infiltrating many church organisations and pastors. The error of lawlessness has become entangled in many ministries and ministers, and many Christians are shocked to discover traitors and quislings in the flock.. men and women who betray; gossip; deceive and beat their fellow workers – Christians eaten up with jealousy; factions; backbiting; alienation; bitterness.

Many with an outward appearance of godliness are wolves in sheep’s clothing..  for the love of many