May He grant you your heart's desire And fulfill all your counsel! 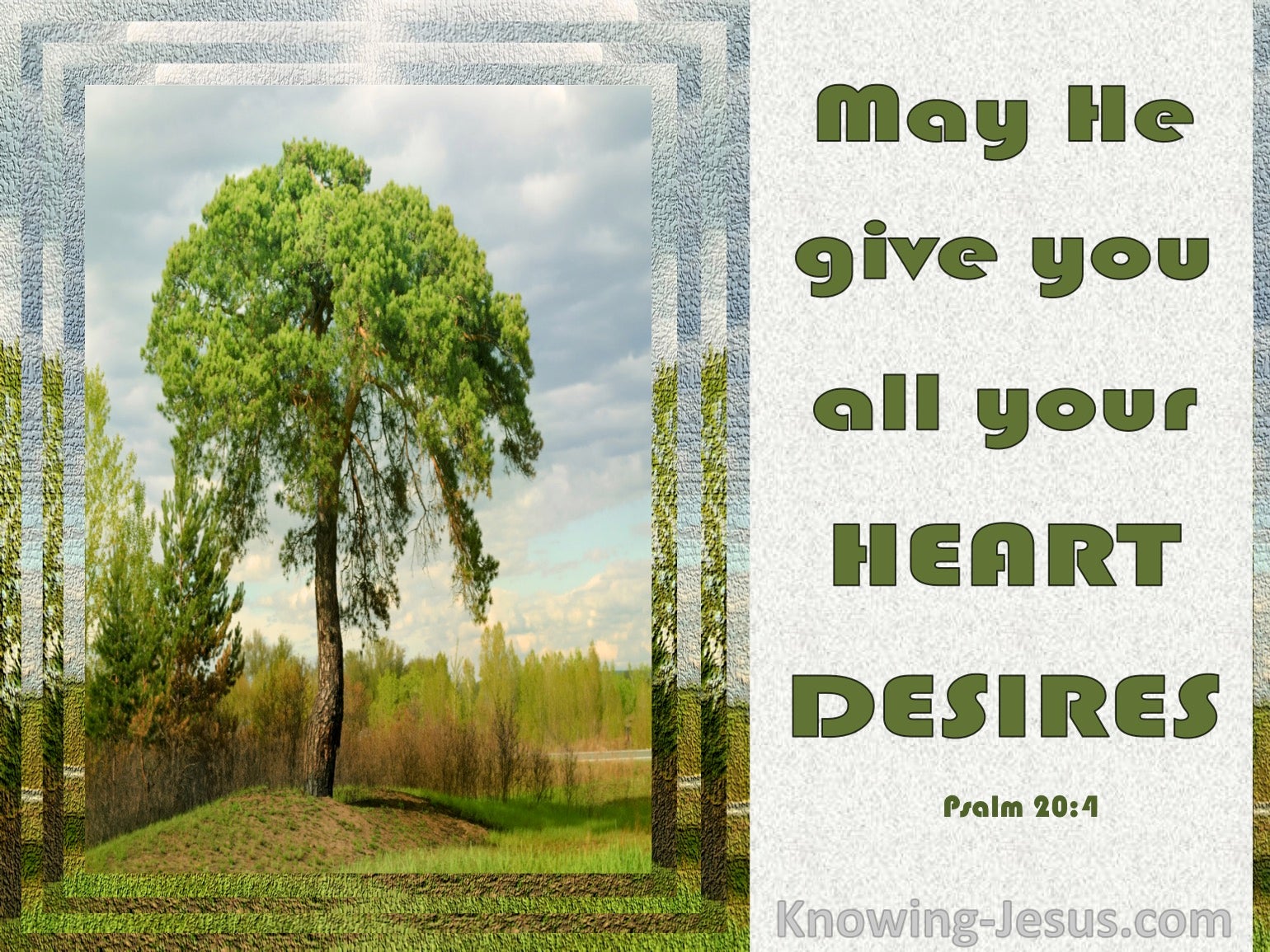 The Unchangeable Ground of Christ

From Him and through Him and to Him are all things. To Him be the glory forever! (Romans 11:36 NIV)

It is necessary that we should be quite clear that, in the Bible, there are not two distinct things, as represented by the two Testaments, the Old and the New, or even more, if the Old Testament is subdivided into eras. There may be two, or more, methods of expression, but throughout the Bible, from its beginning to its close, there is only one thing expressed. Our habit of handling the Bible by dispensations, and emphasizing the different characteristics of different times, may have had the effect of making us mechanically minded, just as can a preoccupation with typology and symbolism. I want, you therefore, to understand this anew: that, in these several and varied forms of expression, God is actuated, from beginning to end, by one thought, and one thought alone: that everything throughout, at all times, shall express and be subservient to His Son.

HE governs everything, in the realities of His Person and of His redemptive and perfecting work. It is one Person and one Work, from the first book of the Bible to the last. The change from the Old Testament to the New is simply and only the change from the indirect to the direct; from the symbolic to that which is symbolized; from the temporal representation to the spiritual reality. That is all. It is not a change of purpose or object, not a change of basis or foundation; it represents no change of principle in any way. Perhaps you feel you know all that; but there is very much more in it than any of us have yet realized. For example, all God’s dealings with the patriarchs were, in principle, as much upon the basis of His Son as are His dealings with you and me. That was true also of Israel. Israel in the Old Testament was dealt with as much upon the basis of God’s Son as we are in this dispensation. God has never, at any time, by any means, worked on any other ground than that of His Son. His creative activities were on the ground of His Son. “In Him, through Him, by Him, unto Him, were all things created” (Col. 1:16); and from then everything has proceeded on that basis, and will be consummated in Christ. By whatever means, in whatever way God has worked, His ground has always been the same. And on into the ages to come, that ground will be unchanging. It is the ground of Christ. It is very important that we should remember this and be quite clear about it.

He is altogether lovely.

May my meditation be sweet to Him. § My beloved is … chief among ten thousand. § A chief cornerstone, elect, precious, and he who believes on Him will by no means be put to shame. § You are fairer than the sons of men; grace is poured upon Your lips. § God … has highly exalted Him and given Him the name which is above every name. § It pleased the Father that in Him all the fullness should dwell.

Whom having not seen you love. Though now you do not see Him, yet believing, you rejoice with joy inexpressible and full of glory.

I also count all things loss for the excellence of the knowledge of Christ Jesus my Lord, for whom I have suffered the loss of all things, and count them as rubbish, that I may gain Christ and be found in Him, not having my own righteousness, which is from the law, but that which is through faith in Christ, the righteousness which is from God by faith.

David strengthened himself in the Lord his God.

Lord, to whom shall we go? You have the words of eternal life. § I know whom I have believed and am persuaded that He is able to keep what I have committed to Him until that Day.

In my distress I called upon the Lord, and cried out to my God; He heard my voice from His temple, and my cry came before Him, even to His ears … They confronted me in the day of my calamity, but the Lord was my support. He also brought me out into a broad place; He delivered me because He delighted in me.

I will bless the Lord at all times; His praise shall continually be in my mouth. My soul shall make its boast in the Lord; the humble shall hear of it and be glad. Oh, magnify the Lord with me, and let us exalt His name together. I sought the Lord, and He heard me, and delivered me from all my fears  … Oh, taste and see that the Lord is good; blessed is the man who trusts in Him!

No Word, No Truth

"With Rationalism's intellectual audacity on the one hand, which dares to speak against the Word of God; and on the other hand, the outward piety of Ritualism - there is really the same root of infidelity at bottom. There is the supplanting of the plain truth of the inspired Word. Both get rid of it, depriving the soul of that which is the only means of a living link between God and man.

"It does not matter what the means or forms may be, whether the negative process of Rationalism, or the more positive claim of Ritualism: if man comes in - whether it be his rites or his reasonings - so as to exclude God's Word, or step between its authority and the soul of man, it becomes pretty much the same result in the end.

"Rationalism is the deification of human powers, in which man presumes by his own mind to judge the Word of God, and is therefore the infidelity of the intellect when either carried out to its results or judged in its principle.

"On the other hand Ritualism is the infidelity of the imagination, very often with piety underneath it, with a love for the Saviour that may preserve from the full consequences of the system, but in itself always savoring of and tending to idolatry.

"We cannot know the value of Christ the Truth unless we have the Spirit of Truth. Nevertheless, the test of having the Spirit of Truth, and of not being a prey to fanaticism, is that the soul is attracted and subject to the Lord Jesus Christ - and this cannot be without faith produced and nourished by the Word of Truth." -W.K.

“He hath made Him to be sin for us … that we might be made the righteousness of God…” 2 Corinthians 5:21

The modern view of the death of Jesus is that He died for our sins out of sympathy. The New Testament view is that He bore our sin not by sympathy, but by identification. He was made to be sin. Our sins are removed because of the death of Jesus, and the explanation of His death is His obedience to His Father, not His sympathy with us. We are acceptable with God not because we have obeyed, or because we have promised to give up things, but because of the death of Christ, and in no other way. We say that Jesus Christ came to reveal the Fatherhood of God, the loving-kind ness of God; the New Testament says He came to bear away the sin of the world. The revelation of His Father is to those to whom He has been introduced as Saviour. Jesus Christ never spoke of Himself to the world as one Who revealed the Father, but as a stumbling block (see John 15:22-24 ). John 14:9 was spoken to His disciples.

The Unique Book of Acts

Jesus said: – I will build My church, and the gates of hell shall not prevail against it.
Matthew 16:18

Paul said: – For I would have you know, brethren, that the gospel which was preached by me is not according to man. For I neither received it from man, nor was I taught it, but I received it through a revelation of Jesus Christ.
Galatians 1:11

But it was also a bridge separating the old covenant from the new covenant. It is the midpoint of a transitional bridge of time, that spans past and present. Pre-cross Israel lived their lives – ”under Law” Post-resurrection Church live their lives –  “under grace,” and the generation of believers that lived both sides of the cross are unique.

Most of the doctrinal teachings within the four Gospels relate to pre-cross Israel. Paul’s writings and the epistles of others are connected with the church dispensation, but the book of Acts covers a crucial and unique transitional period – linking the two.

The book of Acts was written by Dr. Luke and is a sequel to the gospel of Luke. Both books were written to a man called, the most excellent Theophilus. Luke’s gospel informed Theophilus about the life and the work of the Lord Jesus. His gospel ended at the resurrection while Acts continues from that point onwards. Luke is a book about all that Jesus BEGAN to do and to teach. Acts is a book about all that Christ CONTINUED to do and to teach.

The Acts of the Apostles would be better entitled The Continuing Acts Of Jesus. Acts is a book that outlines Christ's words and work, in the early stages of the church. It

therefore … let us strip off the sin which so easily ensnares us”
Hebrews 12: 1

The work of Christ on the Cross was His finished work alone – I can add nothing more. All that is expected of me is to believe on the Son, Who was sent from the Father. I was born into the family of God by faith and by faith I am to live as a child of God. And that is when choices begin to knock on the door of my life. Will I choose to live my Christian life by faith or will I try to live my life by works.