and to bring to light what is the administration of the mystery which for ages has been hidden in God who created all things; 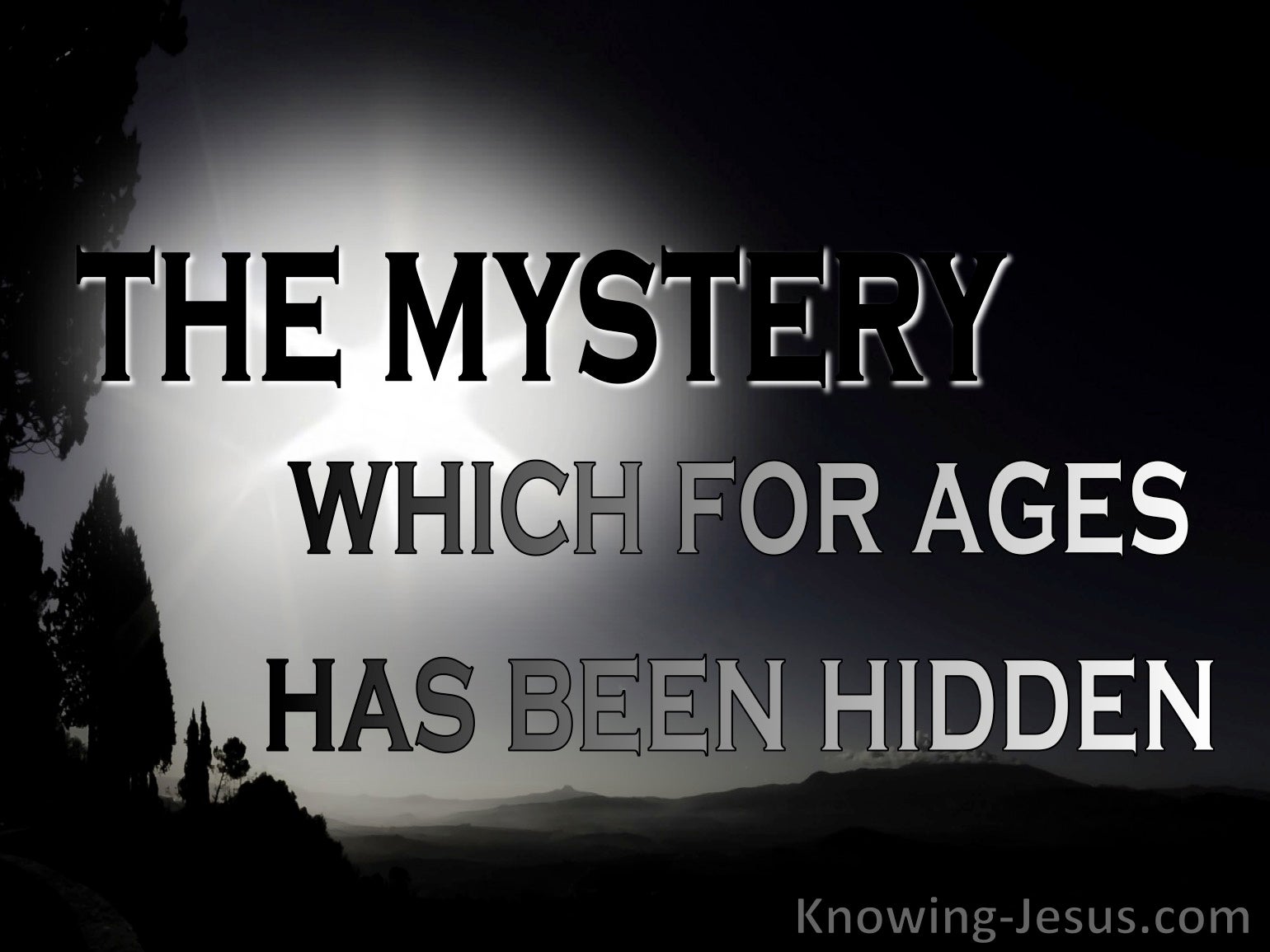 Government by the Holy Spirit

All of us reflect the glory of the Lord with unveiled faces, we are becoming more like Him with ever-increasing glory by the Lord's Spirit. (2 Corinthians 3:18 ISV)

I believe that if we are living in the radiance of Divine Life, there will be something of it betrayed by our faces. At any rate, the world will know something if we are really living in touch with the Lord, and there will be a language which only the spiritual can enjoy and understand. There will be those spiritual counterparts of the seed of Abraham, a people different from all the rest. Now the tragedy of what is called "the Church" has so often been, and perhaps is more today than ever, that that distinctiveness is being lost. It seems today as if a set is being made in some way to remove all the offence and all the difference, and to get us near to people without anything that clashes, in the hope of winning them. Yes, that is what is going on in the religious world around; it is a conforming to this age. But what came in at Pentecost is fundamentally this, that this people of the Spirit are so utterly different in the very center of their being, different altogether from all other peoples, and their power and influence lie in that fact. You cannot fit them in with other things, and it is not because they are awkward and difficult and deliberately irritate people, but there is that which by reason of their spiritual constitution marks them off; and if they did but know it, this is the secret of their influence in the world.

The progress and increase of spiritual Life means this, that the gap widens all the time between the children of God and those in the world who are not such. That is not to be taken literally in this sense, that we begin a mistaken system of hiving off, shutting ourselves up, getting out of touch. That is a wrong application of the principle. The Lord Jesus is preeminently our example in that He could move in any circle, and He did so deliberately, publicans and sinners, all classes, He moved amongst them, but His power over them was in His basic difference from them. Let us be careful how we are caught in this great movement of conforming to this age. To conform is to lose spiritual power.

All the Fullness of God

Put on the Lord Jesus Christ, and make no provision for the flesh, to gratify its desires.
Romans 13:14

That you may be filled to the measure of all the fullness of God.
Ephesians 3:19

Christ’s work on the cross and His glorious resurrection gave us eternal life. His work made all believers complete in Christ and accepted in the Beloved. His work caused us to be blessed of the Father and seated with Him in heavenly places.

Eternal life is a non-returnable gift given to those who believe – it’s already done. Eternal life is a triumphant, imperishable, enduring life – given to all who believe. So why is this victorious, incorruptible life not the experience of all Christians? Why do some live a defeated life for so much of their Christian walk?

The indwelling Spirit was given as a deposit – that we can live godly in Christ Jesus.. a deposit is given when we are born again as God’s assurance that eternal life is ours. All believers received this down-payment at rebirth – but many just do not access it.

One Christian writer put it this way:- As the result of Christ’s work of His cross, and as

The one who comes to Me I will by no means cast out.

“Come now, and let us reason together,” says the Lord, “though your sins are like scarlet, they shall be as white as snow; though they are red like crimson, they shall be as wool.” § Let the wicked forsake his way, and the unrighteous man his thoughts; let him return to the Lord, and He will have mercy on him; and to our God, for He will abundantly pardon. § “Lord, remember me when You come into Your kingdom.” And Jesus said to him, “Assuredly, I say to you, today you will be with Me in Paradise.”

The Son of His love.

Suddenly a voice came from heaven, saying, “This is My beloved Son, in whom I am well pleased.” § Behold! My Servant whom I uphold, My Elect One in whom My soul delights! § The only begotten Son, who is in the bosom of the Father.

In this the love of God was manifested toward us, that God has sent His only begotten Son into the world, that we might live through Him. In this is love, not that we loved God, but that He loved us and sent His Son to be the propitiation for our sins … And we have known and believed the love that God has for us. God is love.

The glory which You gave Me I have given them, that they may be one just as We are one: I in them, and You in Me; that they may be made perfect in one, and that the world may know that You have sent Me, and have loved them as You have loved Me. § Behold what manner of love the Father has bestowed on us, that we should be called children of God!

Since we are morally coloured by the human company we keep, whether high or low, think of the importance of continually associating with the Lord Jesus on high, and having Him as the centre of our love and interest (2 Cor. 3:18).

"As babes in Christ we are left for a season in the old surroundings, because the time is not yet ripe for us to know our high calling, and the discipline needed for the heirs of God. The Father waits for His babes until they are weaned, and able to bear the detaching from things necessary at first.

"Many chafe over the long years of training, they know not for what cause. The souls who are yet under tutors and governors' need sorely to learn how to wait for the Father and rest in His will. Let us remember that circumstances are planned by Him to fit us for the calling He has in view for each of us, in the economy of His purpose. Let us wait until we know His pattern for our life lest, in our impatience, we seek to throw aside the very things permitted of Him to fit us for some special service in His vineyard."

"Multitudes of believers are sick and tired of trying to be good. Paul rests our feet on the right path to goodness. He had learned from experience that goodness is not caught by pursuit but by association; not by struggling to obey laws and rules, but by living in the Lord Jesus' presence. By steadily looking at Him, we are changed into His likeness."

"Our Father will not deliver us from bondage unless we want Him to; therefore He must permit pressure to come upon us in one way or another, so as to bring us to the point of asking Him to do for us what He has been ready and able to do all the time."

“I have finished the work which Thou gavest Me to do.” John 17:4

The Death of Jesus Christ is the performance in history of the very Mind of God. There is no room for looking on Jesus Christ as a martyr; His death was not something that happened to Him which might have been prevented: His death was the very reason why He came.

Never build your preaching of forgiveness on the fact that God is our Father and He will forgive us because He loves us. It is untrue to Jesus Christ's revelation of God; it makes the Cross unnecessary, and the Redemption "much ado about nothing." If God does forgive sin, it is because of the Death of Christ. God could forgive men in no other way than by the death of His Son, and Jesus is exalted to be Saviour because of His death. "We see Jesus because of the suffering of death, crowned with glory and honour." The greatest note of triumph that ever sounded in the ears of the startled universe was that sounded on the Cross of Christ - "It is finished." That is the last word in the Redemption of man.

Anything that belittles or obliterates the holiness of God by a false view of the love of God, is untrue to the revelation of God given by Jesus Christ. Never allow the thought that Jesus Christ stands with us against God out of pity and compassion; that He became a curse for us out of sympathy with us. Jesus Christ became a curse for us by the Divine decree. Our portion of realizing the terrific meaning of the curse is conviction of sin, the gift of shame and penitence is given us - this is the great mercy of God. Jesus Christ hates the wrong in man, and Calvary is the estimate of His hatred.

The third law of thermodynamics in one move sweeps aside the theory of evolution, for everything is moving from order to disorder – not from a low order to a higher. But how many arguments, debates, papers, and thesis have raged in this auditorium. A disproved hypothesis must be fanned into life – to submerge the awful truth, that man is accountable to a higher Being and not master of his own destiny.

When you analyse all the arguments, you must conclude that there is one issue. It is not so much the existence of God – but what think ye of the Lord Jesus Christ. In a world of relativism, absolute truth is shocking; appalling; scandalous; odious.  Absolute truth is revolting, repulsive, and repugnant to secular, relative humanity – and 2000 years ago it was rejected by Israel’s religious right and her liberal left.

Christ’s claim to be Messiah was offensive to legalistic, religious, apostate Israel, and His claim to be Truth, the whole truth and nothing but truth outraged them – and the toxic reaction to His gracious word speaks volumes to all who have ears.

In John Chapter 8 we read that as Jesus was talking many Jews believed in Him. And addressing those Jews who believed on Him, Jesus said to them:-   if ye abide in my word, then are ye my disciples indeed, and ye shall know the truth, and the truth shall make you free. John 8:31. But these inflexible, religious Jews were slaves to sin and captive to their traditions. To these men, absolute Truth was shocking, appalling, scandalous – odious.

And sheltering in their legalistic and incorrect perceptions of God’s anointed, they cried:- we be Abraham’s seed, and were never in bondage. John 8:33.. to which Christ replied: ye are of your father the devil, and the lusts of your father ye will do.  John 8:34

Truth or a Lie

What’s your reaction to Christ’s words to men who supposedly believed in Him? He knew if they would not accept