"An ox knows its owner, And a donkey its master's manger, But Israel does not know, My people do not understand." 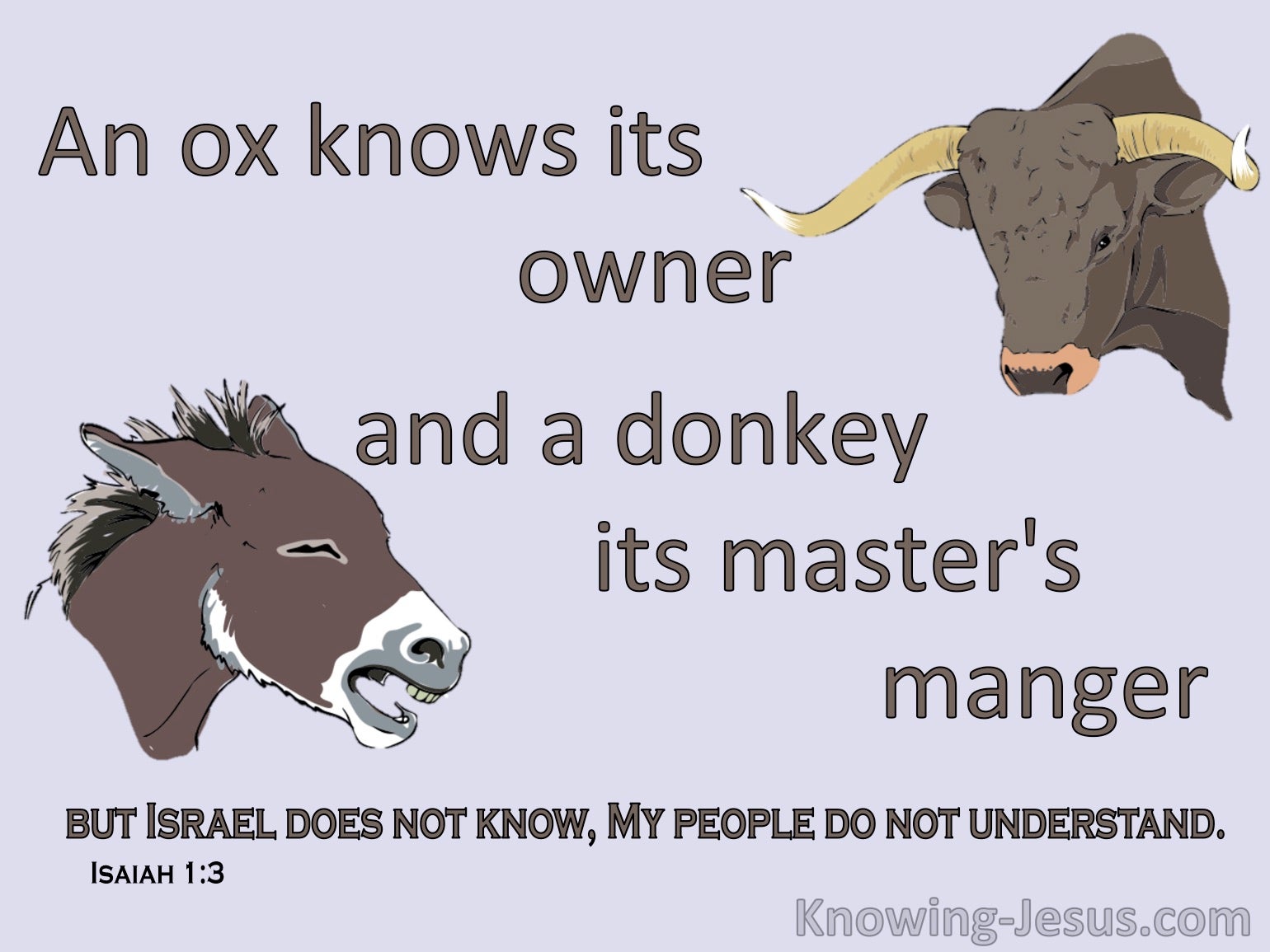 An Indissoluble Oneness in Christ

In Him the whole structure is joined (bound, welded) together harmoniously. (Ephesians 2:21 AMP)

You find a company or lives welded together in an indissoluble, indestructible oneness and you will find there the love of God wrought very deeply into the heart. i>That they may be one,one by the giving love of God through the Son transmitted to the seed. Yes, this matter of Divine love touches so many points all the way round, and why is there such a passion in our hearts as we do speak in these days about this matter? For this very reason: that tragically, grievously, on this earth so very many of those who bear the name of Christian are drawing to themselves, are standing for their own rights, are jealous, envious, divided. And it is just the contradiction of the Divine thought to have a heavenly people on this earth of this kind; the reproduction of this seed which is Christ, which is the embodiment of this love that lets go, this love that knows how to yield, this love that is all the time giving. That is what the Lord is after. It represents a deep work of the Cross within, but surely we can accept nothing less than this?

I do feel that we need so much more of this grace of our Lord Jesus, this love of God, that gets us out of the picture. So often, as you look at people, you can almost see them occupied with themselves, turned in upon themselves. They are just individuals in themselves, tied up. The love of God should release us from all that sort of thing, to say nothing of worse traits of spitefulness and criticism and hurting one another with words. The Lord love deliver us from all and make of us part of this heavenly seed, this heavenly people, really expressing the giving, letting go love of God which comes back a thousand-fold. And do not let us do it for that, to get, but to glorify the Lord. The Lord give us grace!

Fear not, for I am with you; be not dismayed, for I am your God. I will strengthen you, yes, I will help you, I will uphold you with My righteous right hand. § Strengthen the weak hands, and make firm the feeble knees. Say to those who are fearful-hearted, “Be strong, do not fear! Behold, your God will come with vengeance, with the recompense of God; He will come and save you.” § The Lord your God in your midst, the Mighty One, will save; He will rejoice over you with gladness, He will quiet you in His love, He will rejoice over you with singing. § Wait on the Lord; be of good courage, and He shall strengthen your heart.

I heard a loud voice from heaven saying, “Behold, the tabernacle of God is with men, and He will dwell with them, and they shall be His people. God Himself will be with them and be their God. And God will wipe away every tear from their eyes; there shall be no more death, nor sorrow, nor crying. There shall be no more pain.”

Why do you cry to Me? Tell the children of Israel to go forward.

Be of good courage, and let us be strong for our people and for the cities of our God. And may the Lord do what is good in His sight. § We made our prayer to our God, and … set a watch against them day and night.

Not everyone who says to Me, “Lord, Lord,” shall enter the kingdom of heaven, but he who does the will of My Father in heaven. § If anyone wills to do His will, he shall know concerning the doctrine, whether it is from God. § Let us know, let us pursue the knowledge of the Lord.

Watch and pray, lest you enter into temptation. § Watch, stand fast in the faith, be brave, be strong. § Not lagging in diligence, fervent in spirit, serving the Lord.

Strengthen the weak hands, and make firm the feeble knees. Say to those who are fearful-hearted, “Be strong, do not fear!”

Study to show thyself approved unto God, a workman that needeth not to be ashamed" (2 Tim. 2:15a).

"There is an entirely baseless sentiment abroad which assumes that every teaching of the Lord Jesus must be binding upon the believer during this age simply because He said it. The fact is forgotten that He, while living under, keeping, and applying the Law of Moses, also taught the principles of His future earthly kingdom, and, at the end of His ministry and in relation to His Cross, He also anticipated the teachings of grace. If this threefold division of His teachings is not recognized and maintained, there can be nothing but confusion of mind and consequent contradiction of truth." -L.S.C.

"Because the thing is in the Bible does not warrant the conclusion that it is God's will for the Christian. We must seek rightly to divide the Word of truth. What was formerly right for the Jews is for us nothing but the elements of the world. These forms pointed to a reality that is now come; the Body is of Christ. The blessed position of a Christian is, that he has died even to the best things of the world, religious and otherwise, and he is alive to the highest things in the presence of the Father; for the Lord Jesus Christ is his life, in whom he is hidden (Col. 3:3)." -W.K.

"The Gospels are complex almost beyond any other portion of Scripture, since they are a composite of the teachings of the law, of grace, and of the coming kingdom." -L.S.C.

"We realize our privileges and possessions in the Lord Jesus by faith; we enjoy them by the Spirit."

I urge you to live in a way that is worthy of the calling to which you have been called,
Ephesians 4:1

Scripture lays out the truth of who we are in Christ.. then tells us how we should live. But too often the Christian walk is not based on God’s Word but man’s instructions. The Christian life is not based on rules and regulations or standards of conduct. It is not striving to live a life that you hope will be good enough to please God.

It is recognising that you cannot live the sort of life that is pleasing to the Lord,  but rather that your position in Christ releases you from such self-strivings to please.. so that the life you live is Christ’s life living through you – so that YOU are nothing in your life but Christ is all and in all.

It is not just knowing Christ is our life, but that we possess His life, nature and spirit. It is not only that we are a new creation in Him but, that His life is expressed in ours. We are to take possession of our new life in Christ and let Him live through us, until the words I speak are Christ’s words not mine and the acts I do are His acts.

We can be saved and be in union with Christ without accessing His life within ours. We can be positioned in Christ as a believer without our life being submitted to Him.  But when our life is possessed of His, we live and move and have our being in Him, When Christ is given governance of our life, we take possession of what we have.  We possess His very presence, His nature, and His life, within ours. Our position in Him becomes our expression of Him in all that we are and all we do.

In Exodus national Israel was told that one day God would dwell with them. Ezekiel told the nation of Israel that one

God chose us in Christ before the foundation of the world, that we should be holy and blameless before Him. In love
Ephesians 1:4

God in His sovereignty selected a people to be His own treasured possession.. and He chose them before the world was created to be His own peculiar people. God in His wisdom knew that man would sin and that man would need a saviour – and in His eternal council chambers God purposed that Christ would be all in all.

God in His justice purposed that sin must be punished and the wages of sin is death.  But God in His grace so loved the world that He sent His only begotten Son, to die...  so that Christ would identify with man and become the propitiation for our sins – so that all Who believed on His name would not perish but have everlasting life.

And so God, in Himself, knew before time..  the choice every man would make. What think ye of Christ?  for He is the power of God and the wisdom of God, and in Him is salvation- redemption.; sanctification;