"For I have come down from heaven, not to do My own will, but the will of Him who sent Me. 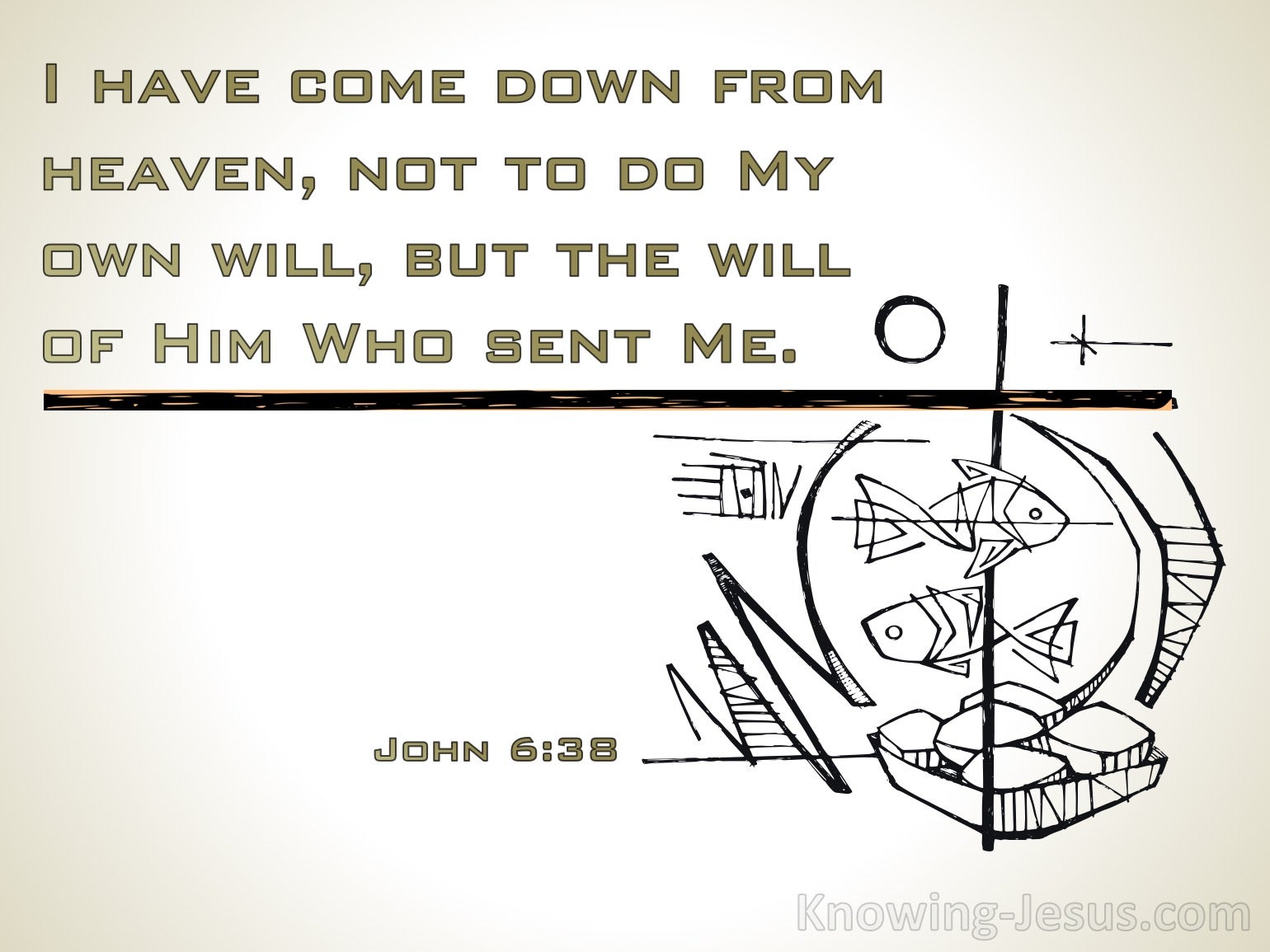 With all that the Lord needs and desires to do in the recovery of His first thought, His original idea for His people, not the least is the recovery of the spiritual family. Any fresh movement of God which relates to His original thought will most certainly reintroduce the spiritual family, and all that that means. That may mean the breakdown of a lot; it may mean that a good deal of misconception will have to be set aside; it may mean that a whole traditional system will have to be discarded.

There is a tremendous value connected with the spiritual family life and with the training in the family. There is no training better than the training in the family. You cannot find an adequate substitute in the institution. In reality, the Lord’s responsible and useful men and women are not trained in the institution; they are trained in the family. It is because of the lack of that family background of training that so often those who go on into the Lord’s work break down in the matter of relationships. The tragedy of so much of the work of God is the tragedy of broken relationships between workers who are put together in an organized way, and they have never gone through the discipline of family life to know how to live triumphantly with difficult people. There is an immense value in the training of the spiritual family and that necessitates very close relationships. We have heard Christian people (church-going people) say that they do not want to come into close an association with their fellow Christians and church members; they would rather not know too much. That is defeat, and that means the loss of a very great deal for the Lord. The Lord’s way is to bring His people together in the closest relationship and not to eliminate the most difficult ones. He has a very peculiar family, made up of all sorts, and some of the sorts are very funny sorts; and that all provides the basis of a wonderful training.

The whole bull he shall carry outside the camp to a clean place, where the ashes are poured out, and burn it on wood with fire.

They took Jesus and led Him away. And He, bearing His cross, went out to a place called the Place of a Skull, which is called in Hebrew, Golgotha, where they crucified Him. § The bodies of those animals, whose blood is brought into the sanctuary by the high priest for sin, are burned outside the camp. Therefore Jesus also, that He might sanctify the people with His own blood, suffered outside the gate. Therefore let us go forth to Him, outside the gate, bearing His reproach. § The fellowship of His sufferings.

Rejoice to the extent that you partake of Christ’s sufferings, that when His glory is revealed, you may also be glad with exceeding joy. § Our light affliction, which is but for a moment, is working for us a far more exceeding and eternal weight of glory.

God created man in His own image.

Therefore, since we are the offspring of God, we ought not to think that the Divine Nature is like gold or silver or stone, something shaped by art and man’s devising.

God, who is rich in mercy, because of His great love with which He loved us, even when we were dead in trespasses, made us alive together with Christ … We are His workmanship, created in Christ Jesus for good works, which God prepared beforehand that we should walk in them. § For whom He foreknew, He also predestined to be conformed to the image of His Son, that He might be the firstborn among many brethren.

We know that when He is revealed, we shall be like Him, for we shall see Him as He is. § I shall be satisfied when I awake in Your likeness.

He who overcomes shall inherit all things, and I will be his God and he shall be My son. § If children, then heirs—heirs of God and joint heirs with Christ.

Many believers have gone only as far as justification can take them - spiritual birth, and a bit beyond. There they stagnate, in dire need of the fresh streams of living water that come from seeing their position in Christ. "God . . . hath blessed us with all spiritual blessings in heavenly places in Christ" (Eph. 1:3). "Always begin with your position, where you are; and then think of your condition, what you are." -R.P. "Christians are at their wits' end. Many have given up the fight. They still go to church; but secretly they feel that victory is out of the question. They have no weapons for such an hour. Frankly, they have capitulated to the prince of this world, for all their efforts to rout the foe have failed. "But victory is the believer's right, as truly his as the air he breathes. However, he must understand the conditions. He must see himself enthroned with Christ. He must see himself according to God's own Holy Word, as crucified with the Lord Jesus, dead, buried, raised and made to sit in heavenly places with his Lord and Saviour Jesus Christ. Without this he will go down in ignominious defeat in spite of all his strivings and his prayers. With this position he is more than conqueror through Him who loved him and gave Himself for him." -F.J.H.

The Initiative Against Depression

The angel did not give Elijah a vision, or explain the Scriptures to him, or do anything remarkable; he told Elijah to do the most ordinary thing, i.e. to get up and eat. If we were never depressed we should not be alive; it is the nature of a crystal never to be depressed. A human being is capable of depression, otherwise there would be no capacity for exaltation. There are things that are calculated to depress, things that are of the nature of death; and in taking an estimate of yourself, always take into account the capacity for depression.

When the Spirit of God comes He does not give us visions, He tells us to do the most ordinary things conceivable. Depression is apt to turn us away from the ordinary commonplace things of God's creation, but whenever God comes, the inspiration is to do the most natural simple thing - the things we would never have imagined God was in, and as we do them we find He is there. The inspiration which comes in this way is an initiative against depression; we have to do the next thing and do it in the inspiration of God. If we do a thing in order to overcome depression, we deepen the depression; but if the Spirit of God makes us feel intuitively that we must do the thing, and we do it, the depression is gone. Immediately we arise and obey, we enter on a higher plane of life.

God, My Tranquility (All I Need-3)

Let my counsel be acceptable unto Thee, and may there be a lengthening of Thy tranquillity.
Dan.4:27

What a precious notion – a lengthening of God’s tranquillity.. and though other versions translate the word ’tranquillity’ as ‘prosperity.’ God as my tranquillity is a most precious thought in this world of noisy clamour. The dictionary definition of ’tranquillity’ is quietness, peace, rest, ease and security – and how deeply the hurting heart desires this grace that God alone can provide. The Lord Himself called His own disciples aside when life’s pressures pressed in. He called His own dear ones to: Come apart into a desert place, and rest a while – for there were many coming and going, and they had no leisure so much as to eat” Mark 6:31

Such peaceful meditation with the Lord Himself becomes increasingly difficult – as the pressures, problems and pain of life press in on every side – and we faint. – and tensions, trials and temptations test us to the limit of our endurance. But God, through the psalmist, urges, “Be still and know that I am God.” Psalm 46:10. For how can we have ears to hear His still small voice through the shriek of life. How can we hear His words of instructions or discern His whispers of love. God instructs us to take time each day to quietly meditate upon His word of truth – to quietly consider the things of God and the beauties of His person. We all need time to rest awhile… to relax in His tranquillity and to repose in His arms. We all need to be wise and take time alone – leaning on the breast of the Beloved.

Drop thy still dews of quietness.. until ALL out strivings cease. Take from our souls the strain and stress.. and let our ordered lives confess the beauty of Thy peace. Receiving His tranquillity does not necessitate our removal from life’s little tasks. We do not need to don the habit of a monk or

Who Was To Come

Jesus was made a little lower than the angels. For the love of Christ compels us, because we judge, that if One died for all, then all died. For as by one man’s disobedience many were made sinners, so also by one Man’s obedience many will be made righteous. The first man was of the earth, made of dust – a living being. The second Man is the Lord from heaven, a life-giving spirit. As was the man of dust, so also are those who are made of dust; and as is the heavenly Man, so also are those who are heavenly.

Equal With the Father

Made Lower Than Angels

Lower than one bright seraph, whose covering was gold and precious stones. He made Himself inferior to the one anointed cherub who aspired to be as God, and who in pride aspired to ascend above the heavens, and who screamed I will be as God. I will, I will, I will, I will, I will be like the Most High. But consider Jesus, Who in humbleness of will and in graciousness of spirit, cried:- not My will but Thy will be done.. carrying out the plans of the Father – fulfilling the purposes of God’s eternal plan.

That since by man came death.. by man must also come the resurrection