for the weapons of our warfare are not of the flesh, but divinely powerful for the destruction of fortresses. 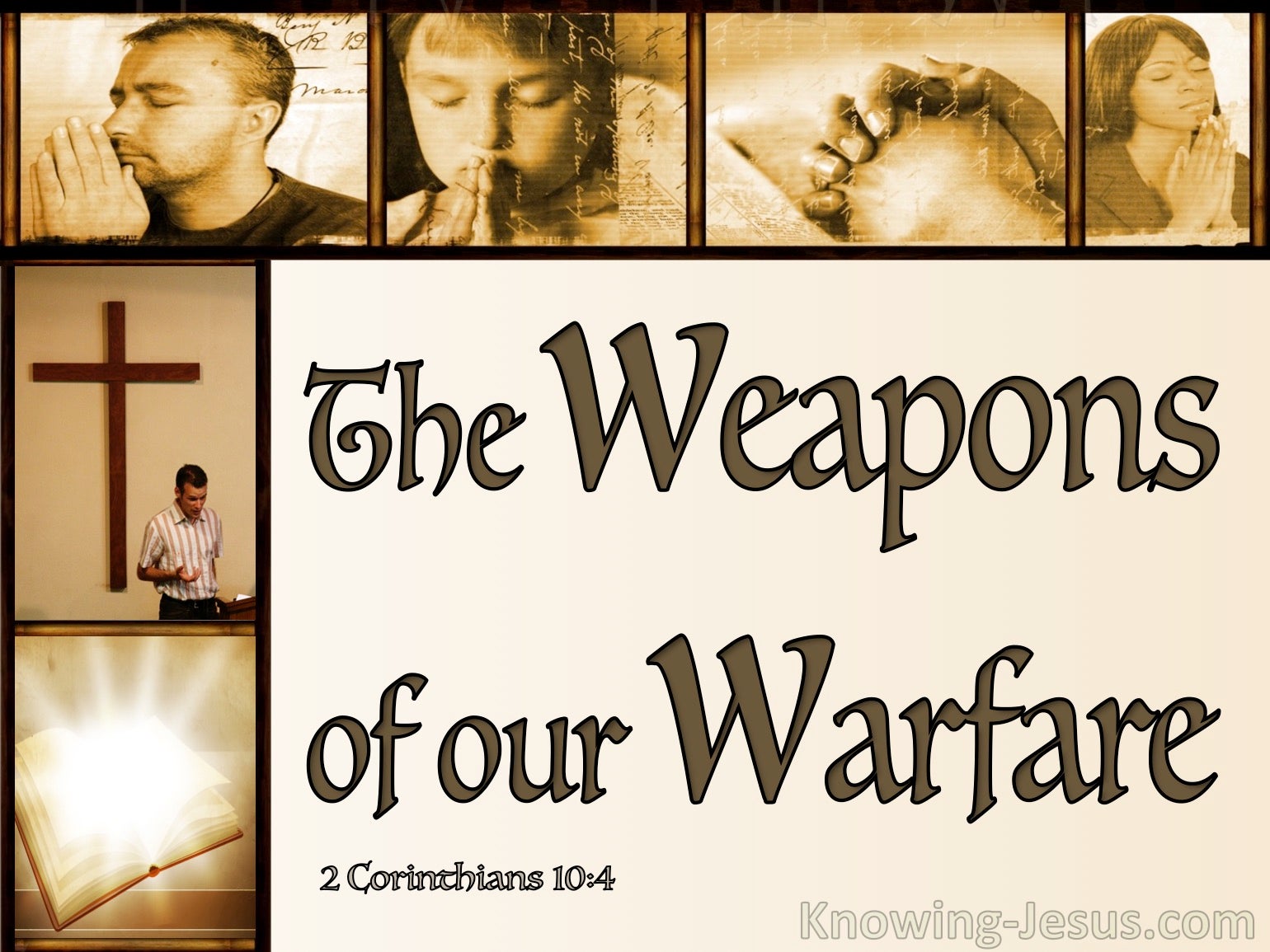 Walk in Him, rooted and built up in Him and established in the faith. (Colossians 2:7)

Abraham in the land... yet the very promises given him of God seeming to be denied. Was Abraham mistaken? Are we not sometimes bewildered with the Lord, and are not His ways past finding out? It all looks such a muddle, but as faith holds on, one day we shall praise Him, as we see the reason for it all afterwards; "the path of the just... shineth more and more unto the perfect day" Prov. 4:18. Note "PATH" not things! These mysteries of the way contain some secret mystery of God; and are they not another opportunity to show forth His wisdom and power? When all seems gone, the conflict so great, the experience so strange and there is no key to the situation; we are tempted to question whether the promises were even of God; everything is so contrary to what we expected, we begin to wonder if we are all wrong! Just then, is the time for us to stand fast in the Lord and maintain that stand in faith.

After all, our experiences are very much alike. There is perplexity, there is apparent contradiction, there is conflict; the forms of experience may vary, but it comes to all of us in some way or another still "He abideth faithful." How does this establish us? By the very helplessness of the situation, and ourselves, which causes us to cast ourselves upon Him, and it is then we prove Him. You are coming to the place where you know the mystery of God, and it is a glorious opportunity for Him to show His wisdom and so you are established. It is all a matter of endurance.

[Abraham] believed in the Lord, and He accounted it to him for righteousness.

He did not waver at the promise of God through unbelief, but was strengthened in faith, giving glory to God, and being fully convinced that what He had promised He was also able to perform. And therefore “it was accounted to him for righteousness.” Now it was not written for his sake alone that it was imputed to him, but also for us. It shall be imputed to us who believe in Him who raised up Jesus our Lord from the dead.

The promise that he would be the heir of the world was not to Abraham or to his seed through the law, but through the righteousness of faith.

The just shall live by faith. § Let us hold fast the confession of our hope without wavering, for He who promised is faithful. § Our God is in heaven; He does whatever He pleases. § With God nothing will be impossible… Blessed is she who believed, for there will be a fulfillment of those things which were told her from the Lord.

God who calls you into His own kingdom and glory.

The kingdoms of this world have become the kingdoms of our Lord and of His Christ, and He shall reign forever and ever! § You . . . have made us kings and priests to our God; and we shall reign on the earth. § I saw thrones, and they sat on them, and judgement was committed to them. And they lived and reigned with Christ for a thousand years. Then the righteous will shine forth as the sun in the kingdom of their father. § Do not fear, little flock, for it is your Father’s good pleasure to give you the kingdom.

I bestow upon you a kingdom, just as My Father bestowed one upon Me, that you may eat and drink at My table in My kingdom, and sit on thrones judging the twelve tribes of Israel. § Your kingdom come.

That He might make known the riches of His glory on the vessels of mercy, which He had afore prepared unto glory" (Rom. 9:23).

Mercifully, day by day, He unfolds before our startled eyes the evil depths of the self-life. It is thus we come to know Him as the "God who is rich in mercy," and ourselves as "vessels of mercy."

"Today sinful men, not angels, are entrusted with the preaching of the Gospel, and before they can be used of God must first of all have plumbed the depths of their own sinfulness, and have, therefore, discovered the heights and glories of God's longsuffering. In this way they can become a pattern of His mercy, by means of which He can demonstrate His grace to others." -J.C.M.

"The power effectively to present Christ as Lord, is by means of revelation deep within us, bringing into being an unshakable knowledge of His authority and might, and making us content to accept our weakness and nothingness in order that we may see the pleasure of the Lord prosper in His hand (Isa. 53:10)." -J.C.M.

"The more useful anyone is, the more he requires to be brought to an end of himself, and to find that his all is in the Lord Jesus. We find some of His servants deeply chastened at first, in order to prepare them for a useful course; and some after a useful period are brought low and afflicted in order that they might learn how truly and fully our Father is sovereign." -J.B.S.

Decreasing Into His Purpose

If you become a necessity to a soul, you are out of God's order. As a worker, your great responsibility is to be a friend of the Bridegroom. When once you see a soul in sight of the claims of Jesus Christ, you know that your influence has been in the right direction, and instead of putting out a hand to prevent the agonies, pray that they grow ten times stronger until there is no power on earth or in hell that can hold that soul away from Jesus Christ. Over and over again, we become amateur providences, we come in and prevent God; and say - "This and that must not be." Instead of proving friends of the Bridegroom, we put our sympathy in the way, and the soul will one day say - "That one was a thief, he stole my affections from Jesus, and I lost my vision of Him."

Beware of rejoicing with a soul in the wrongs thing, but see that you do rejoice in the right things. "The friend of the Bridegroom…rejoiceth greatly because of the Bridegroom's voice: this my joy therefore is fulfilled. He must increase, but I must decrease." This is spoken with joy and not with sadness - at last they are to see the Bride groom! And John says this is his joy. It is the absolute effacement of the worker, he is never thought of again.

Watch for all you are worth until you hear the Bridegroom's voice in the life of another. Never mind what havoc it brings, what upsets, what crumblings of health, rejoice with divine hilarity when once His voice is heard. You may often see Jesus Christ wreck a life before He saves it. (Cf. Matt. 10:34.)

There is one and one basis alone for your acceptance and mine. We are accepted by God in the Beloved. We are accepted by God, because of what Christ did on the cross. There is not a thing in heaven or earth that can separate us from His love. There is nothing in the earthly or spiritual realm that can divorce us from His care. There is no created thing including your foolish self, that can remove yourself from Him. No man or woman, principality or power can touch you. Why – what is the reason for this?

You are accepted in God because He has accepted you in the Beloved. You are accepted in Him and you are accepted because of Him – and because of Him alone. There’s nothing too dark or vile that can separate a blood-bought believer from Him. There is nothing too good or worthy that an unbeliever can do to gain acceptance – except: "believe on the Lord Jesus Christ". It never has and it never will depend on you.. for it all depends on Him. Many Christians find this total acceptance by God, very difficult to understand… and they spend much of their lives seeking to remain in His good books, by being 'good',  ..and so their foot slips, or temptation strikes, and they think His acceptance of them is lost. Not so.

But there is one and one basis alone for your acceptance and mine. We are accepted by God – in the Beloved.

As each has received a gift, use it to serve one another, as good stewards of God’s varied grace: 1 Peter 4:10

"For it will be like a man going on a journey, who called his servants and entrusted to them his property. To one he gave five talents, to another two, to another one – to each according to his ability. Then he went away." Matthew 25:14-15. "Do you not know that if you present yourselves to anyone as obedient slaves, you are slaves of the one whom you obey..  either slaves of sin, which leads to death – or slaves of obedience, which leads to righteousness?" Romans 6:16  "All these are empowered by one and the same Spirit, Who apportions to each one individually as He wills. To each is given the manifestation of the Spirit for the common good." 2 Corinthians 12:11;7  "Moreover, it is required of stewards that they be found faithful." 1 Corinthians 4:2

As Believers, we are required to be the Lord’s faithful followers while in the world. As devoted servants, we are committed to be the Master’s diligent servants all our life. As Christians, we are pledged to be Christ’s steadfast soldiers to our life’s end. From the first act of believing faith to the last breath of mortal bodies, we are to be diligent stewards of His manifold grace. From the moment of rebirth, we entered into a ‘covenant’ with Him. We reckoned His promises true as we trusted in His love.. and thus became "accepted in the Beloved" – and thus were regarded as loyal servants of the King.

And to each servant the Lord gives gifts which, He expects to be used to His glory. To some, He gives a leadership gift to be exercised in public ministry and service but to most, He bestows the quiet endowment for the hidden life of helping others. To each, He entrusts His talents.. to be used in His service, as He wills. Each gift has been chosen with His infinite care and His limitless