And Philip said, If thou believest with all thine heart, thou mayest. And he answered and said, I believe that Jesus Christ is the Son of God. 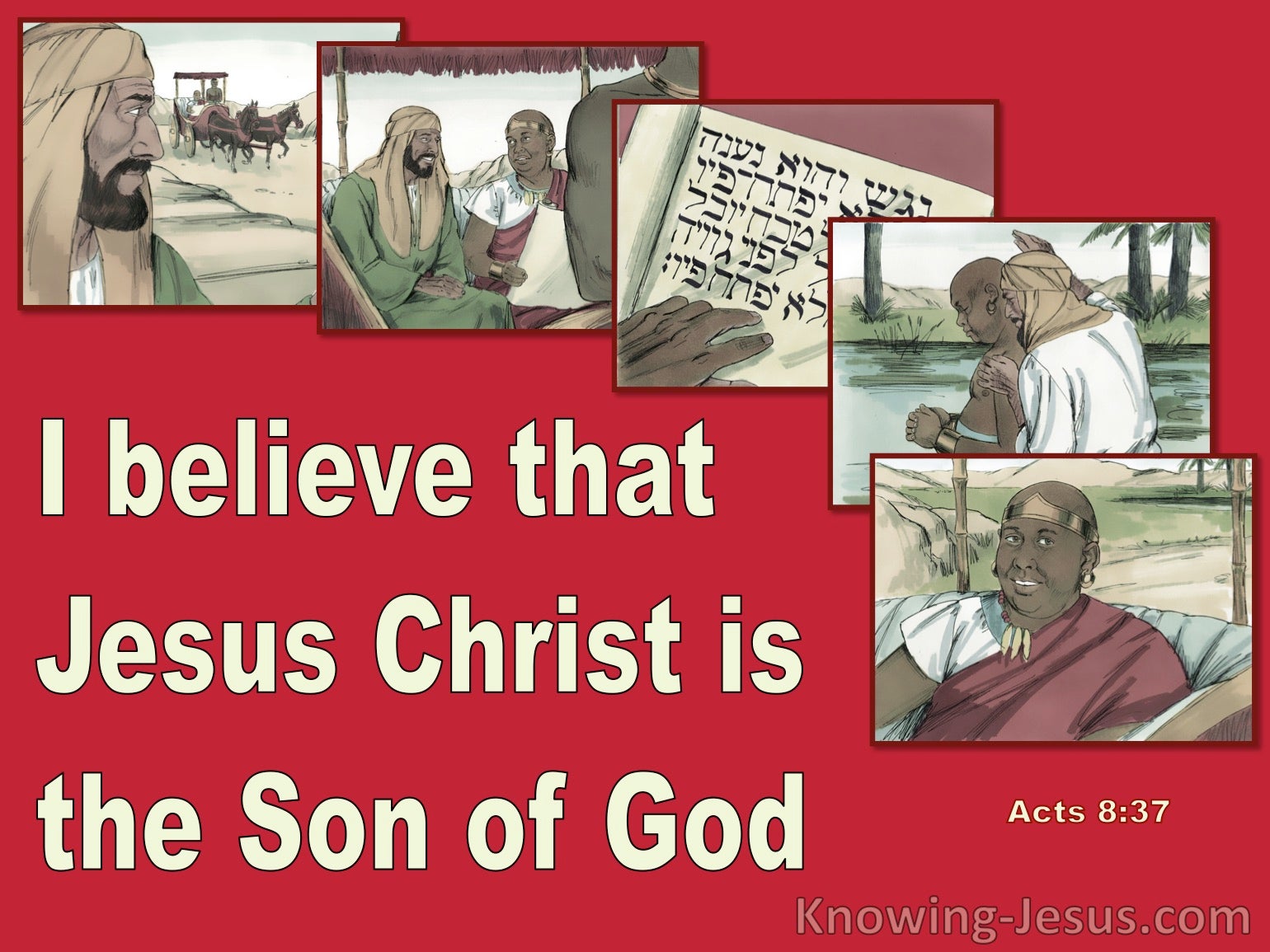 This is my prayer: that your love may abound more and more in knowledge and depth of insight,o that you may be able to discern what is best and may be pure and blameless until the day of Christ. (Philippians 1:9,10 NIV)

Personal, inward, spiritual intelligence is a very rare thing. No wonder that the enemy has such a successful line in delusions, counterfeits, and false representations. Our greatest safeguard against such will be a deep knowledge of the Lord through discipline.To know the Lord in a real way means steadfastness when others are being carried away - steadfastness through times of fiery trial. Those who know the Lord do not put forth their own hand and try to bring things about. Such are full of love and patience, and do not lose their poise when everything seems to be going to pieces. Confidence is an essential and inevitable fruit of this knowledge, and in those who know Him there is a quiet restful strength which speaks of a great depth of Life.

Let me point out that in Christ "are all the treasures of wisdom and knowledge hidden," and the Lord's will for us is to come to an ever-growing realization and personal appreciation of Him in Whom all the fullness dwells. We have only stated facts as to the Lord's will for all His own, and their greatest need. The absence of this real knowledge of the Lord has proved to be the most tragic factor in the Church's history. Every fresh uprising of an abnormal condition has disclosed the appalling weakness amongst Christian people because of this lack. Waves of error; the swing of the pendulum to some fresh popular acceptance; a great war with its horrors and many-sided tests of faith; all these have swept away multitudes and left them in spiritual ruin. These things are ever near at hand, and we have written this message to urge upon the Lord's people to have very definite dealings with Him that He will take every measure with them that they might know Him.

The younger son . . . journeyed to a far country, and there wasted his possessions with prodigal living.

Such were some of you. But you were washed, but you were sanctified, but you were justified in the name of the Lord Jesus and by the Spirit of our God. § We … were by nature children of wrath, just as the others. But God, who is rich in mercy, because of His great love with which He loved us, even when we were dead in trespasses, made us alive together with Christ (by grace you have been saved), and raised us up together, and made us sit together in the heavenly places in Christ Jesus.

In this is love, not that we loved God, but that He loved us and sent His Son to be the propitiation for our sins. § God demonstrates His own love toward us, in that while we were still sinners, Christ died for us … If when we were enemies we were reconciled to God through the death of His Son, much more, having been reconciled, we shall be saved by His life.

As Christ forgave you, so you also must do.

There was a certain creditor who had two debtors. One owed five hundred denarii, and the other fifty. And when they had nothing with which to repay, he freely forgave them both. § I forgave you all that debt … Should you not also have had compassion on your fellow servant, just as I had pity on you?

And whenever you stand praying, if you have anything against anyone, forgive him, that your Father in heaven may also forgive you your trespasses. But if you do not forgive, neither will your Father in heaven forgive your trespasses. § As the elect of God, holy and beloved, put on tender mercies, kindness, humility, meekness, longsuffering; bearing with one another, and forgiving one another, if anyone has a complaint against another.

Love … is the bond of perfection.

Not as though I had already attained, either were already perfect; but I follow after, if that I may apprehend that for which also I am apprehended of Christ Jesus"" (Phil. 3:12).

In faith we apprehend the growth truths; in fact the Lord Jesus apprehends us for growth in those truths.

"I have been much struck by the thought of the hiddenness and slowness of God's workings. It must be a matter of distinct faith. If we do not understand this it will make us impatient. If we understand it will teach us to rest in God and to yield ourselves all the more joyfully to Him to work out His purpose. In all creation time is the great perfecter of growth. So with us, God will perfect that which concerns us."

"Abraham believed God, and it was counted unto him for righteousness' (Rom. 4:3), when his faith apprehended the promise of God; yet it was nearly 40 years after that this Scripture was fulfilled, when he offered his son. The faith had its apprehension and enjoyment for many a year before the work of faith.

"In proportion as the revelation is of God, in like measure must there be an answer to it sooner or later. Effect must follow cause. If the light has been received, the day will come that it must assert and obtain an expression of itself."

""Two glad services are ours, Both the Master loves to bless. First we serve with all our powers, Then with all our helplessness.""

"I press toward the mark for the prize of the high calling of God in Christ Jesus" (Phil. 3:14)."

The Next Best Thing To Do

"Ye ask, and receive not, because ye ask amiss." If you ask for things from life instead of from God, you ask amiss, i.e., you ask from a desire for self-realization. The more you realize yourself the less will you seek God. "Seek, and ye shall find." Get to work, narrow your interests to this one. Have you ever sought God with your whole heart, or have you only given a languid cry to Him after a twinge of moral neuralgia? Seek, concentrate, and you will find.

"Ho, every one that thirsteth, come ye to the waters." Are you thirsty, or smugly indifferent - so satisfied with your experience that you want nothing more of God? Experience is a gateway, not an end. Beware of building your faith on experience, the metallic note will come in at once, the censorious note. You can never give another person that which you have found, but you can make him homesick for what you have.

"Knock, and it shall be opened unto you." "Draw nigh to God." Knock - the door is closed, and you suffer from palpitation as you knock. "Cleanse your hands" - knock a bit louder, you begin to find you are dirty. "Purify your heart" - this is more personal still, you are desperately in earnest now - you will do anything. "Be afflicted" - have you ever been afflicted before God at the state of your inner life? There is no strand of self-pity left, but a heartbreaking affliction of amazement to find you are the kind of person that you are. "Humble yourself" - it is a humbling business to knock at God's door - you have to knock with the crucified thief. "To him that knocketh, it shall be opened."

He Rules Over All - Once Upon Eternity (3)

STUDY - Once Upon Eternity

The Lord hath established his throne in the heavens; and his kingdom ruleth over all.
Psalm 102:22

What great comfort are these sterling Words from Psalms. What immense consolation these Words prove to be to the fainting heart. What consolation to know that the Lord most high ruleth and sets up whom He will. God exercises absolute sovereign control over the world. He practices supreme jurisdiction over the entire universe: there is no power but of God, and the powers that be, are ordained of God." Rom.13:1

He it is that establishes thrones and kingdoms, so that His eternal plan will be fulfilled. No earthy province nor heavenly power exercises control beyond His jurisdiction. All power emanates from Him, and all the schemes of man will be used for God’s purposes. There are no exceptions and peculiarities to this established principle from God. Not Satan nor his earthly puppets can circumnavigate this fixed, fundamental truth: "the Lord has established His throne in the heavens, His kingdom rules over all." Ps.103:19

As the world continues to spiral out of control.. as the bedrock of our security is shaken – never, ever forget this one over-riding fact: that all rule, power, and authority emanate from one Person, and that person is God. God, Who is seated on His throne in a revealed position in the universe. God, Who is enthroned, in the uttermost parts of the north. God, Who from this vantage point directs the affairs of man, through His delegated rulers – good or evil. They all perform His will.

This eternal God Who knew the end from the beginning has thus ordered it. This One Who is seated beyond the realm of time, has thus revealed His plan to us. The plans and purposes of God are set out in the Scriptures. He revealed His purposes to us, through His servants, the prophets. He reveals His plans to us by His grace and His love, for all Scripture is given by inspiration of

Now therefore, O our God, hear the prayer of Thy servant
Daniel 9:17

How often we fall to our knees with little more than a sigh or an upward glance. How frequently we raise our eyes up to the heavens, while our hearts are grieving. How many times do we try to pray, but the words, at times, freeze on our lips. The inner cries of our hearts are ofttimes secreted behind closed doors of prepense. At times, the inward heart is bleeding while the outward countenance is smiling – but the cry of the human soul to the Lord is never unheeded. The call from the grieving heart to the Lord, is never is left unanswered.

God’s ear is ever open to your cry and His eye is ever attentive towards your needs.. though through many long nights and years we deem it thus, not to be. He heard the feeble cries of your infancy as well as those of your youth. He knew the tears that you would weep in your distresses as well as your tears of joy. He knows the pain that your heart is experiencing at this very moment, and He ever knows what troubles and anguishes, are yet to fall upon your shoulders.

He understands that tears have been your "meat day and night". He knows you are weary with your nightly groaning and daily pain. He cares that your couch is wet with your tears, and He takes and counts – and cares about your every tear. He keeps your tears in a bottle for His remembrance, and He includes every heart-groan and dry tear that fails to wet the lashes. He cares so deeply for each teardrop that has been shed. He has compassion for every pain that rips the heart apart – for He knows the end from the beginning, and He knows that: they that sow in tears shall reap in joy. Psalm 126:5

But just as Scripture is designed as one most glorious whole,