They said to me, "The remnant there in the province who survived the captivity are in great distress and reproach, and the wall of Jerusalem is broken down and its gates are burned with fire." 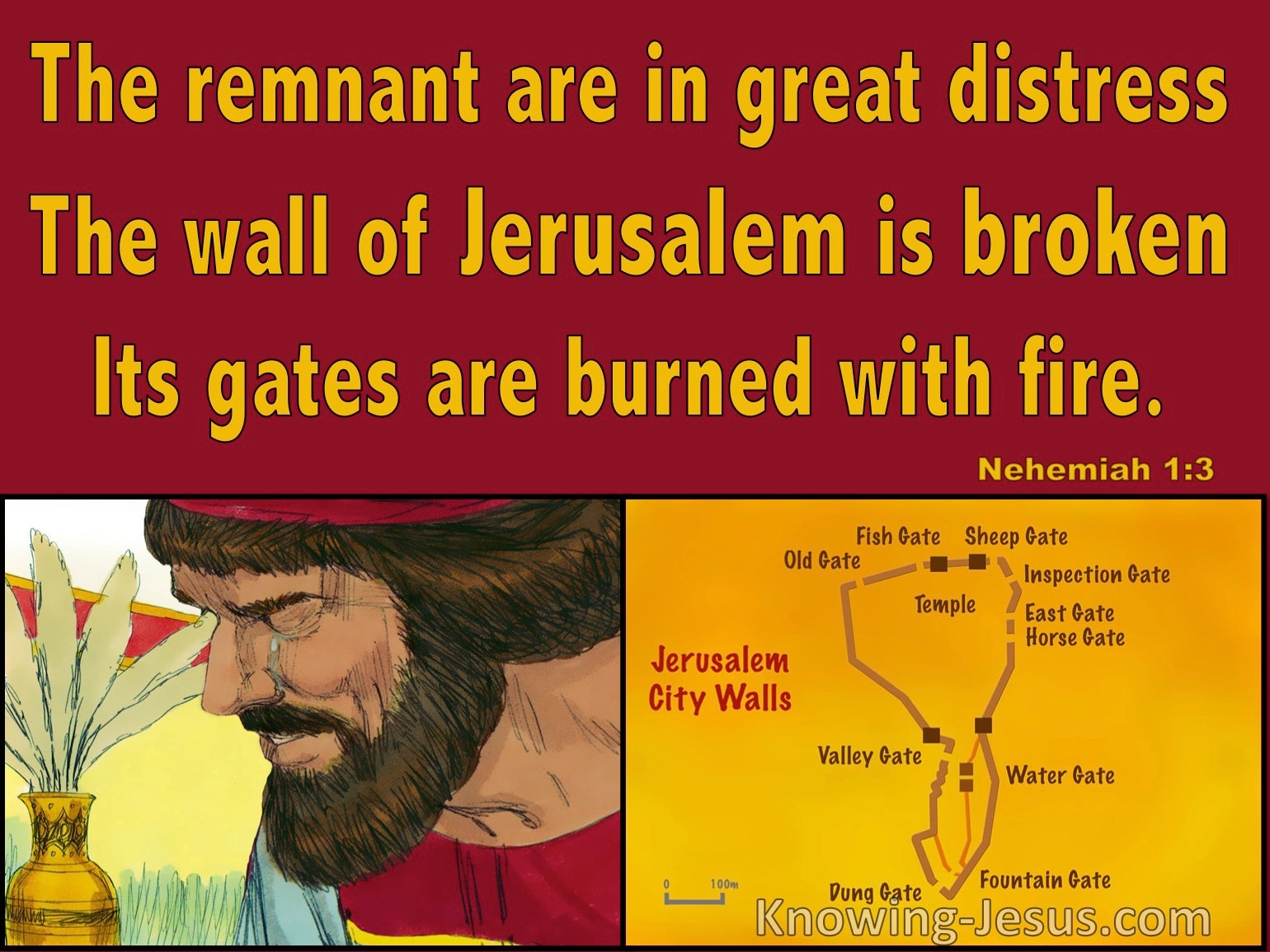 Whoever wants to be My disciple must deny themselves and take up their cross and follow Me. (Mark 8:34 NIV)

In the end, it will be the End that judges our Christian life. And so it is the Holy Spirit work, His interest, concern, energy, and activity; not only to bring people to the door and to get them inside the door, but to make them know that that door is but the opening of a Way, on the other side of the door everything lies. It is not the door alone, but it is what lies beyond the door, and that is this renewal, this making anew after the image of Him that created. The End governs: it is Christ in all that He signifies and means and stands for. It is that vast All that He is Christ is All, and in allis the last clause. It is Christ in that fullness, which is more than our salvation, more than our initial salvation. The door is essential,but it is what it leads to that justifies going in it at all.

Christ Himself, when He was here, never failed to let people know that when they entered that door, or that straight and narrow way, they were in for trouble.... Now that may sound like a very terrible thing to say, especially to you young Christians who are not far inside the door, but be perfectly clear about it; the Lord Jesus never deceived anybody about this, never at all. He let people know that to follow Him, as He put it at that time, involved them in difficulty and suffering and persecution and trial and a lifelong thing. There is a cost here, a great cost. And we shall discover that while there are the compensations, for there are undoubtedly the compensations in this life, and the mighty compensations for eternity, this is a way which is not easy for the natural man by any means. This work of the Holy Spirit is drastic, exacting, and very trying to the flesh. Make no mistake about it; it will take all the energy that the Holy Spirit Himself has to accomplish this work. It really will. So the Lord Jesus has not left us in any doubt about this.

The secret things belong to the Lord our God, but those things which are revealed belong to us.

Lord, my heart is not haughty, nor my eyes lofty. Neither do I concern myself with great matters, nor with things too profound for me. Surely I have calmed and quieted my soul, like a weaned child with his mother; like a weaned child is my soul within me.

The secret of the Lord is with those who fear Him, and He will show them His covenant. § There is a God in heaven who reveals secrets. § Indeed these are the mere edges of His ways, and how small a whisper we hear of Him!

No longer do I call you servants, for a servant does not know what his master is doing; but I have called you friends, for all things that I heard from My Father I have made known to you. § If you love Me, keep My commandments. And I will pray the Father, and He will give you another Helper, that He may abide with you forever — the Spirit of truth.

The Spirit . . . makes intercession for the saints according to the will of God.

Most assuredly, I say to you, whatever you ask the Father in My name He will give you. Until now you have asked nothing in my name. Ask, and you will receive, that your joy may be full. § [Pray] always with all prayer and supplication in the Spirit.

Rejoice always, pray without ceasing, in everything give thanks; for this is the will of God in Christ Jesus for you. Do not quench the Spirit.

Great will be the day when you come to realize that the sole reason for the existence of your Bible, your soul and your spirit is to glorify - and share - the Lord Jesus Christ. "The moment we begin to rest our peace on anything in ourselves, we lose it. And this is why so many saints have not settled peace. Nothing can be lasting that is not built on God alone. How can you have settled peace? Only by having it in God's way. By not resting on anything, even the Spirit's work within, but on what the Lord Jesus has done entirely outside you. Then you will know peace - conscious unworthiness, but yet peace. "In the Lord Jesus alone, God finds that in which He can rest concerning us, and so it is with His saints. The more you see the extent and nature of the evil that is within, as well as without, the more you will find that what the Lord Jesus is and did, is the only ground at all on which you can rest. "Alas! the freedom which the Gospel brings may be used to take things easy, and, more or less, retain or gain in the world; but where this is the case, it is seldom a soul possesses any large measure of spiritual enjoyment, and it is never accompanied by solid peace. The soul becomes thus unsettled and uncertain. These oscillations may go on for a certain time, until God carries on the work more deeply in the heart."

"As free, and not using your liberty for a cloak of maliciousness, but as the servants of God" (1 Pet 2:16).

His Tender Mercies -Song Of Zacharias (2)

Through the tender mercy of our God.
Luke 1:78

God is gracious and merciful and full of tender, loving-kindness. I don’t know what I would do if God were not full of tender-mercy. In tender-mercy He stooped down to forgive the rebellion of the children of Adam: “LORD, be merciful to me; heal my soul, for I have sinned against You”. Pleas for His tender-mercy runs like a golden thread through the book of Psalms. In Psalm 119:58 we read: “I entreated Your favour with my whole heart. Be merciful to me according to Your Word”. Reminders of His tender-mercy flow like refreshing streams through His Word: “The LORD is gracious and merciful, slow to anger and abounding in mercy”. Psalm 145:8

It was only His tender-mercy and loving-kindness Who conceived the cross – the cross to which we can flee to as a city of refuge and a citadel of shelter. My refuge is in the heart of a merciful God. What a cry from the sentiments of that cherished old hymn can be uttered.. by the One that desperately yearns and longs for His tender-mercies:  “Nearer my God to Thee, nearer to Thee”… closer to Thee. “Even though it is a cruel cross of pain and sorrow, that raises me” – that lifts me closer to You.

Do You Know Jesus ?

Do you really know Jesus ? Some years ago Dr S.M Lockridge described Him in these breath-taking terms….

The Bible says he’s a king
King of Jew,
King of Israel
King of righteousness
King of the ages
King of heaven
King of glory
King of kings and lord of lords

My king is a sovereign king
Yes, that’s my king

Do you know Him ?
He’s the greatest phenomenon that has ever crossed the horizon of this world

He is the loftiest idea in literature
He’s the highest personality in philosophy
He’s the fundamental doctrine of true theology
He’s the only one qualified to be an all-sufficient Saviour
I wonder if you know Him today ?

He strengthens, and He sustains
He guards and he guides
He healed the sick, and He cleansed the lepers
He forgives sinners He discharges debtors

He rewards the diligent
He beautifies the meek

Do you know Him ?

His life is matchless
His office is manifold

His promises are sure
His goodness is limitless

His mercy is everlasting
His love never changes

His word is enough
His grace is sufficient

I wish I could describe Him to you!