But he answered them, "He who made me well was the one who said to me, 'Pick up your pallet and walk.'" 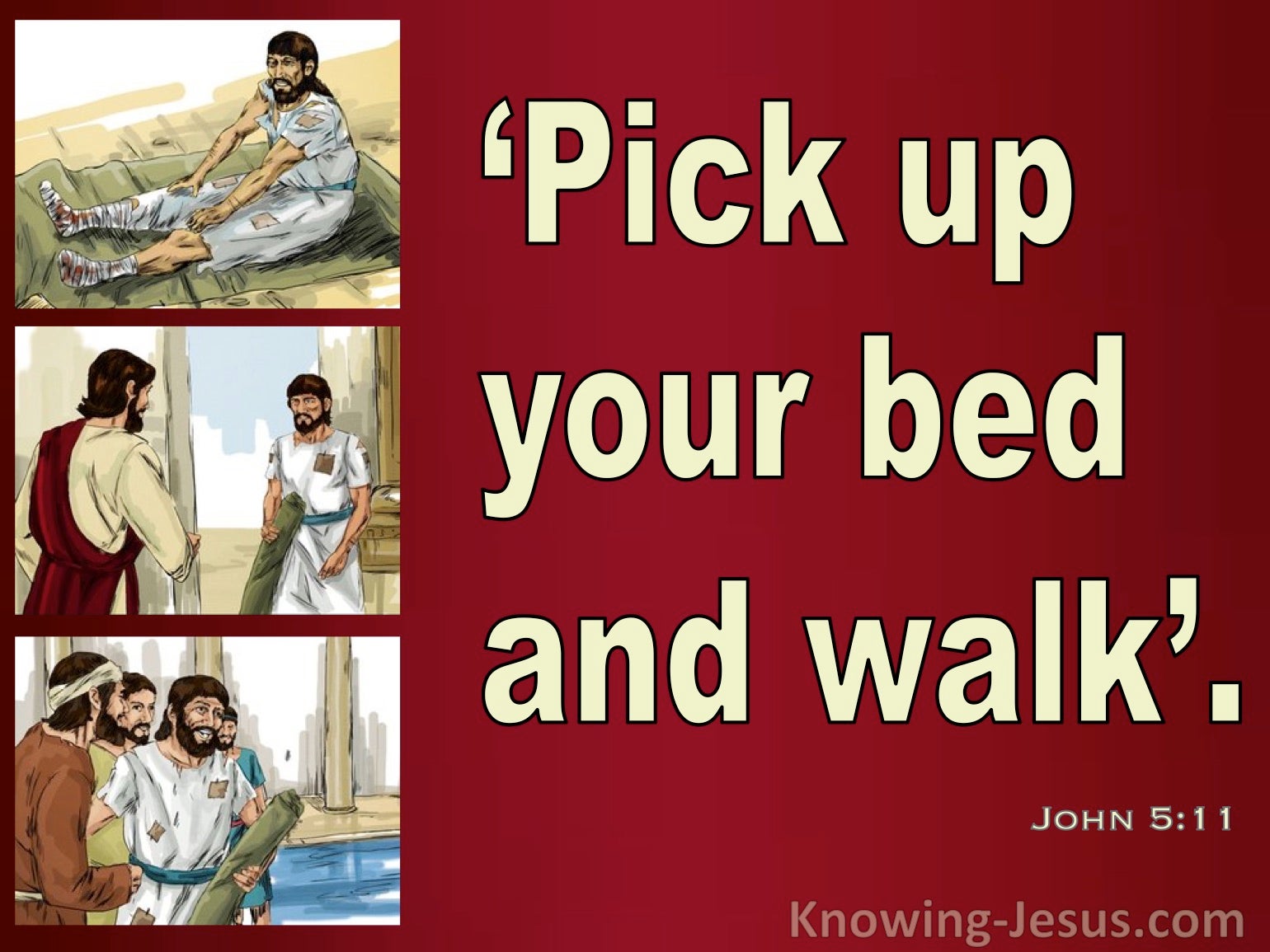 Christ - All, and In All

In Christ lives all the fullness of God in a human body. So you also are complete through your union with Christ, who is the head over every ruler and authority. (Colossians 2:9,10 NLT)

Oh, those subtle suggestions that are ever being whispered in our ears, that if we give up this and that we are going to lose, and life is going to be poorer, and we are going to be narrowed down until we have nothing left. It is a lie! That is the thing that is countering God's great thought for us. God's thought for us is that One, no less than His Son Jesus Christ, in Whom all the fullness of the Godhead dwells in bodily form, should be our fullness. All the fullness of God in Christ for us! You never attain to that by rejecting Him. Life must be much less than it need be if you are not going all the way with the Lord; and what obtains in the matter of our consecration to the Lord, our entire and complete abandonment to Him in our life and our complete cut with all that is not of the Lord, obtains in the realm of service. This flesh loves to sport itself in Christian work, and tells us that if we are going to be dependent upon the Lord we are going to have an anxious time. But a life of dependence upon God can be a life of continual romance. It is there that we make discoveries which are a constant wonder.

You may be nearly dead one minute and in the next the Lord gives you something to do and you are very much alive, dependent upon Him for every breath you breathe. But thus you come to know the Lord. Then after that experience you are just as helpless and dead again for a while, but you remember that the Lord did something. Then He does it again; and so life becomes a romance; yet no one would ever guess you were depending on the Lord for your very breath. It is a very blessed thing to know the Lord is doing it, when you could not do it at all; it is, humanly, naturally, impossible, but the Lord is doing it!

The house to be built for the Lord must be exceedingly magnificent.

You … as living stones, are being built up a spiritual house. § Do you not know that you are the temple of God and that the Spirit of God dwells in you? If anyone defiles the temple of God, God will destroy him. For the temple of God is holy, which temple you are. § Your body is the temple of the Holy Spirit who is in you, whom you have from God, and you are not your own. For you were bought at a price; therefore glorify God in your body and in your spirit, which are God’s. § What agreement has the temple of God with idols? For you are the temple of the living God. As God has said: “I will dwell in them and walk among them. I will be their God, and they shall be My people.” § [You] having been built on the foundation of the apostles and prophets, Jesus Christ Himself being the chief cornerstone, in whom the whole building, being fitted together, grows into a holy temple in the Lord, in whom you also are being built together for a dwelling place of God in the Spirit.

He is before all things.

The Amen … the Beginning of the creation of God. § The beginning, the firstborn from the dead, that in all things He may have the preeminence.

The Lord possessed me at the beginning of His way, before His works of old. I have been established from everlasting, from the beginning, before there was ever an earth … When He prepared the heavens, I was there, when He drew a circle on the face of the deep … when He assigned to the sea its limit, so that the waters would not transgress His command … I was daily His delight, rejoicing always before Him. § Indeed before the day was, I am He.

The Lamb slain from the foundation of the world. § The author and finisher of our faith, who for the joy that was set before Him endured the cross, despising the shame, and has sat down at the right hand of the throne of God.

Being justified by faith, we have peace with God through our Lord Jesus Christ" (Rom. 5:1).

Few see and stand upon the fact that our history in Adam ended on the Cross. Our past will plague us until we acknowledge that we are now clear of Adam and safely hidden in the risen Lord Jesus - newly-born creations in Him. One of the penalties of self-occupation is self-pity and corroding remorse.

"Regret for a sinful past will remain until we truly believe that for us in the Lord Jesus that sinful past no longer exists. The man in Christ has only His past and that is perfect and acceptable to the Father. In the Lord Jesus he died, and in Him he rose, and he is now seated in Him within the circle of the Father's favored ones. He is no longer angry with himself because he is no longer self-regarding, but Christ-regarding: hence there is no place for regret."

"The knowledge of our union with the Lord Jesus is what will deliver the believer from all that is low and feeble, and will lift him to a life of joy and peace. To gaze upon our risen Lord in the Father's presence, to whom all things are subject, will transform us into heavenly Christians, dwelling all the day in the Father's presence." -A.M.

"The believer shares the Lord Jesus' Cross knowing this, that our old man was crucified with him' Rom. 6:6); His death:- ye died and your life is hid with Christ in God' Col. 3:3); His burial:- we were buried with him by baptism into death' Rom. 6:4); His resurrection:- as Christ was raised up from the dead by the glory of the Father, even so we' Rom. 6:4); His ascension:- made us sit together in heavenly places in Christ Jesus' Eph. 2:6)." -F.J.H.

"There is, therefore, now no condemnation to them who are in Christ Jesus" (Rom. 8:1).

Does He Know Me

When I have sadly misunderstood Him? (John 10:17.) It is possible to know all about doctrine and yet not know Jesus. The soul is in danger when knowledge of doctrine outsteps intimate touch with Jesus. Why was Mary weeping? Doctrine was no more to Mary than the grass under her feet. Any Pharisee could have made a fool of Mary doctrinally, but one thing they could not ridicule out of her was the fact that Jesus had cast seven demons out of her; yet His blessings were nothing in comparison to Himself. Mary "saw Jesus standing and knew not that it was Jesus . . ;" immediately she heard the voice, she knew she had a past history with the One who spoke. "Master!"

When I have stubbornly doubted? (John 10:27.) Have I been doubting something about Jesus - an experience to which others testify but which I have not had? The other disciples told Thomas that they had seen Jesus, but Thomas doubted - "Except I shall see . . , I will not believe." Thomas needed the personal touch of Jesus. When His touches come, or how they come, we do not know; but when they do come they are in describably precious. "My Lord and my God!"

When I have selfishly denied Him? (John 21:15-17.) Peter had denied Jesus Christ with oaths and curses, and yet after the Resurrection Jesus appeared to Peter alone. He restored him in private, then He restored him before the others. "Lord, Thou knowest that I love Thee."

Have I a personal history with Jesus Christ? The one sign of discipleship is intimate connection with Him, a knowledge of Jesus Christ which nothing can shake.

The Man After God’s Own Heart

The LORD has sought for Himself a man after His own heart
1 Samuel 13:14

God is looking for men after His own heart like David, who will shepherd His people, and He is searching for prayerful men of integrity, like the prophet Daniel. He is looking for willing men like Isaiah who volunteered to do the Lord’s bidding – trusting men like Habakkuk, who lived a life of trusting faith. He is looking for men who loved their God like Joseph and John, Peter and Paul. Jeremiah and James. And He is also looking for willing women, whose value is far above rubies. Daughters like Sarah and Esther, Deborah and Hannah, Ruth and Rahab – Mary and Elizabeth.

All these people were in right relationship with the Lord and each of these characters displayed a characteristic that pleased the Lord – a godly disposition that was precious in His eyes – a quality that is dear to the heart of our God. God laid His hand on each of His people in a unique way and God took time in each life to develop in each one a peculiar and distinctive quality that was a dim reflection of His own perfect grace – one that would be seen in the face of Jesus Himself.

The name of each distinctive character is of little import for we are drawn to the godly quality their lives displayed. Hallmarks of men, that love and trust their

Jesus said…. lo I am with you always – even to the consummation of the age.
Matthew 28:20

What a truth to hide in your heart. What a promise to rest your weary soul upon. This assurance was given to the confused disciples at the ascension of their Lord. The understanding of this difficult saying was later given to the apostle Paul: lo I am with you always.. even to the consummation of the age.

This puzzling point is the central feature found in Colossians: 'the mystery, hid from the ages..' Colossians 1:26. This was the vital truth of  'Christ in you, the hope of glory.' Colossians 1:27 What an important thing to know. What a vital reality to understand, that Christ never intended to be out of the world again during the coming 'age'. Know ye not that your body is the temple of the Holy Ghost? – the Spirit of Christ dwells in you. 1 Corinthians 6:19

And He did redeem this mortal coil with His blood, shed on a wooden cross.. and He proclaimed He never intended to be away from the world during this age. 'Lo I am with you always – even into the consummation of the age.'