So he shepherded them according to the integrity of his heart, And guided them with his skillful hands. 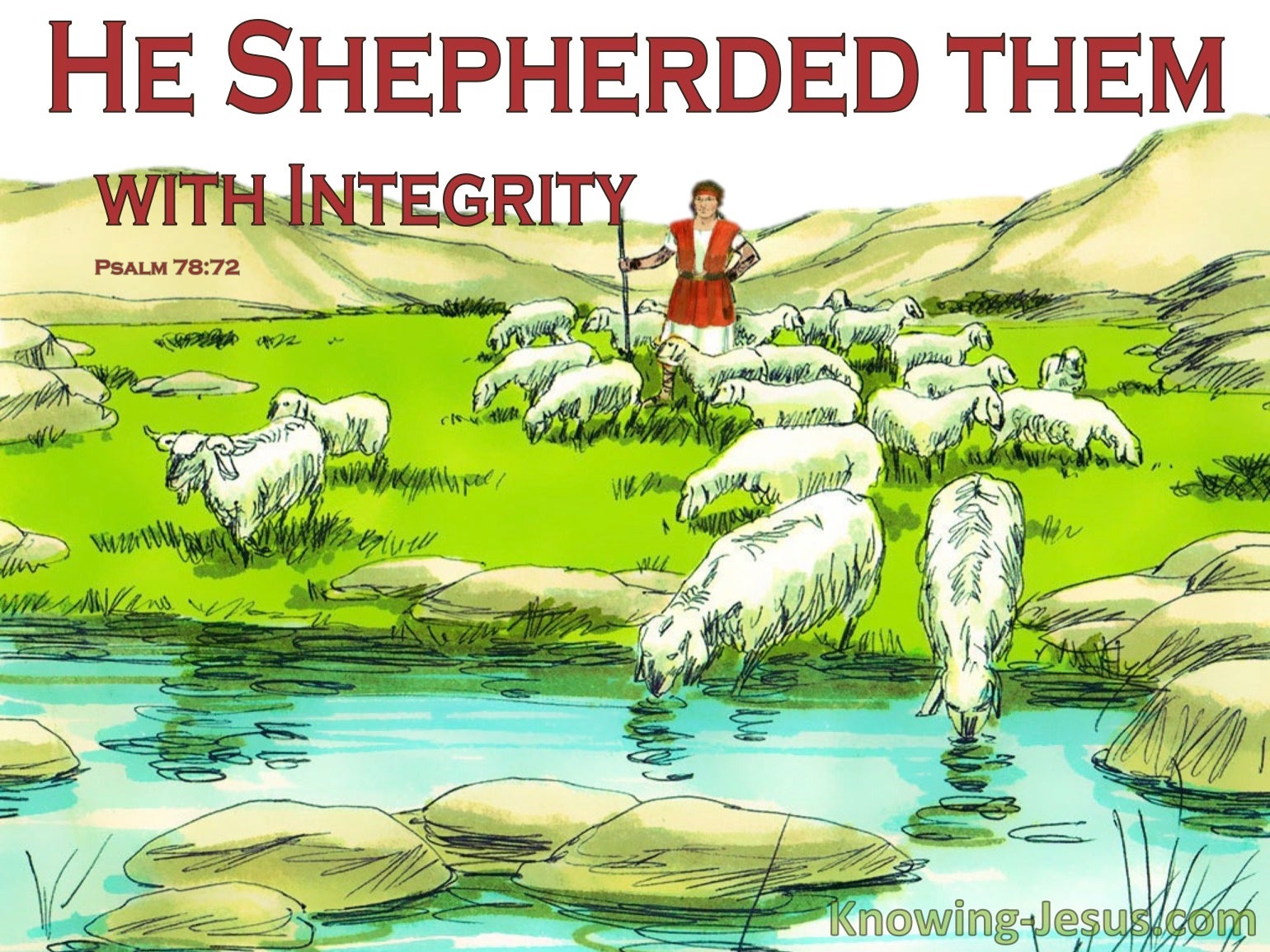 All who have entered into God rest have rested from their labors, just as God did after creating the world. (Hebrews 4:10 NLT)

Christ is God's Sabbath. Christ is our Sabbath. When we enter by faith into Christ's righteousness, we enter into God's rest. It is a tremendous power.... The Lord says, in quite simple language, "If only you will trust Me, and trust My provision, and stop worrying, stop fretting, stop being anxious; if you will but believe Me, I have the ground upon which I could meet all your need; I am no longer without ground. There was a time when I had not the ground upon which to do anything with you, and for you, but now you are on the ground of Christ, the ground which I have provided; if only you will trust Me, if only you will rest in Me to bring you through, you will be saved from so much of this weakness, and fret, and anxiety!" Worry is a destroying thing. At the back of a lot that we suffer in body, and in mind, there is so often a secret, hidden restlessness, something deep down in our subconscious being of a fret, an anxiety, something that is not rest. It takes many forms. Sometimes over a concern of the Lord's we feel that, unless we do it, it will never be done. We feel that if we are not up and at it, then the whole thing will go to pieces; so much depends upon us.

No one will think that this is the call for passivity, for abandon of concern for the things of the Lord; but it is possible for us to have the things of the Lord on our hearts and yet not to have faith in God about them. There are hidden secrets to a great deal of our weakness and defeat, and unnecessary suffering. They are the hidden things of something which is other than just restful faith in God. There are some people who need to take things to heart a little more than they do, but for many the trouble is perhaps of the other kind. They are thinking that they have to run God's universe for Him; they must look after things or else they will never be looked after! But to observe the Sabbath (no one will take that literally as meaning the observance of a particular day of the week), to recognize Christ as God's Rest through righteousness, to observe that, to keep that Sabbath, is Life which conquers death, because it is righteousness which cannot be destroyed.

The God of all grace.

I will proclaim the name of the Lord before you. I will be gracious to whom I will be gracious. § He is gracious to him, and says, “Deliver him from going down to the Pit; I have found a ransom.” § Being justified freely by His grace through the redemption that is in Christ Jesus, whom God set forth as a propitiation by His blood, through faith, to demonstrate His righteousness, because in His forbearance God had passed over the sins that were previously committed. § Grace and truth came through Jesus Christ.

By grace you have been saved through faith, and that not of yourselves; it is the gift of God. § Grace, mercy, and peace from God our Father and Jesus Christ our Lord. § To each one of us grace was given according to the measure of Christ’s gift. § As each one has received a gift, minister it to one another, as good stewards of the manifold grace of God. § He gives more grace.

Grow in the grace and knowledge of our Lord and Savior Jesus Christ. To Him be the glory both now and forever.

I will lift up my eyes to the hills – from whence comes my help?My help comes from the Lord.

As the mountains surround Jerusalem, so the Lord surrounds His people from this time forth and forever.

O our God, will You not judge them? For we have no power against this great multitude that is coming against us; nor do we know what to do, but our eyes are upon You. § My eyes are ever toward the Lord, for He shall pluck my feet out of the net. § Our help is in the name of the Lord, who made heaven and earth.

We are one spirit with the Lord Jesus by the one and only Holy Spirit.

"I can always know when the Holy Spirit is leading me, because He ever occupies me with the Lord Jesus. True, He may have to call attention to my own condition, but if He does, He turns me to the Lord Jesus, not merely to convict me, but to relieve me." -J.B.S.

"Spiritual growth is the Holy Spirit engraving the Lord Jesus on a man's heart, putting Him into his thoughts, his words, and his ways, just as the Law was engraved upon stones. It is not that there is no failure. A man who is seeking to make money does not always succeed; but everybody knows what his object is. Just so, the Lord Jesus Christ is the object of the believer's life." -J.N.D.

"The believer is not to clamor for the solution of perplexities or for intellectual mastery of divine mysteries. What knowledge he has in this realm is his because the Holy Spirit has declared it to him; and for the Spirit's declaration he must wait."

"None of us is ever beyond the work of the Spirit in us. Many think that because they have the light of a truth, they are in all the practical reality of it. No! You may know and reckon on all the Bible, but there is no growth beyond the measure of the Holy Spirit's work in you." -J.B.S.

"The Holy Spirit is only truly yielded to as the Cross, with its crucifixion of the flesh and the world, has become the attitude of our heart and mind."

Do You Continue To Go With Jesus?

“Ye are they which have continued with Me in My temptations.” Luke 22:28

We have the idea that we ought to shield our selves from some of the things God brings round us. Never! God engineers circumstances and what ever they may be like we have to see that we face them while abiding continually with Him in His temptations. They are His temptations, not temptations to us, but temptations to the life of the Son of God in us. The honour of Jesus Christ is at stake in your bodily life. Are you remaining loyal to the Son of God in the things which beset His life in you?

Do you continue to go with Jesus? The way lies through Gethsemane, through the city gate, outside the camp; the way lies alone, and the way lies until there is no trace of a footstep left, only the voice, "Follow Me."

God’s Work in You

For it is God Who is working in you, enabling you both to desire and to work out His good purpose.
Philippians 2:13

When God gave the Law through Moses, He knew man’s fallen sin-nature would develop a spirit of confidence in self – rather than humble dependence upon God. The standard God set to regulate man’s behaviour was perfect – but God did not supply the way or means for man to achieve His standard – so man inevitably failed. God’s intention was that man would fulfil the righteous requirements of the Law in dependence upon Him – rather than relying on his own abilities, strength, or wisdom.

God knew that sinful man could never achieve the perfection that the Law required, but Israel confidently announced – all that the Lord has spoken to us, we will do!   Exodus 19:8     This worthy pronouncement to do the will of God sounds commendable to the ear of fallen man – but it displays man’s pride, and demonstrates independence from God. God in His wisdom knew that it was needful for man to try to be perfect in his own strength and fail, to realise he was unable to reach the perfection God required.

The apostle Paul realised that it was the Law that showed him his sin. He would not have known that coveting was wrong if the Law had not said, “You must not covet.” King Saul was also a prideful man who tried to address the problem of life in his own fleshly strength, rather than depending on God’s provision and trusting His word. The Galatians were a group of believers who demonstrated pride, rebellion, and independence from God, by insisting that the righteous requirements of the Law should be achieved by human merit – having failed to learn God’s vital lesson.

And when we attempt in our own strength to meet our own needs or try to reach God’s standard, through self-confidence in our own abilities, we will also fail. As time passed, the people of Israel became

The Prisoner of the Lord

I, therefore, the prisoner of the Lord, beseech you to walk worthy of the calling with which you were called.
Ephesians 4:1

Thanks be to God who always leads me on from place to place in the train of His triumph to celebrate His victory over the enemies of Christ.
2 Corinthians 2:14 (Conybeare)

What an amazing conception of himself – was this label Paul adopted personally: “The Prisoner of the Lord” – a Captive of Christ. Paul was not a reluctant prisoner nor was he press-ganged into service. His was a life that willingly and cheerfully walked the way of the cross. He was not captive to jail or jailer; dungeon or detention; Caesar or Rome. His captivity was God’s foreseen and foreordained purpose and divine plan. His body may have been in chains, but his spirit was in heavenly places. He may have been under lock and key, but he boasted the truest liberty of all. For in all situations he lived and worked and had his being in the Spirit of God.

Living in spirit and truth does not limit, but multiples spiritual effectiveness, and Paul was able to say in all situations: “I am content..” even in incarceration.  I have learned, in whatsoever state I am, therewith to be content. Phil.4:11 Paul is the most astonishing example of a man that was utterly dependent on God, He is an example and sign that his life was not his own, but hid with Christ in God. Both his physical body and inner being depended on the quickening of the Spirit. The Spirit of Life that raised Jesus from the dead, was Paul’s total dynamism.

This prisoner of the Lord had no life of his own – the sentence of death was on him. The enemy sought to destroy him at every step but he was energised by the risen Lord. His life becomes the typical example.. of those prepared to be prisoners of God. Trials; tribulations; distresses and death will shadow all who follow this path. Indeed, it seems