until we all attain to the unity of the faith, and of the knowledge of the Son of God, to a mature man, to the measure of the stature which belongs to the fullness of Christ. 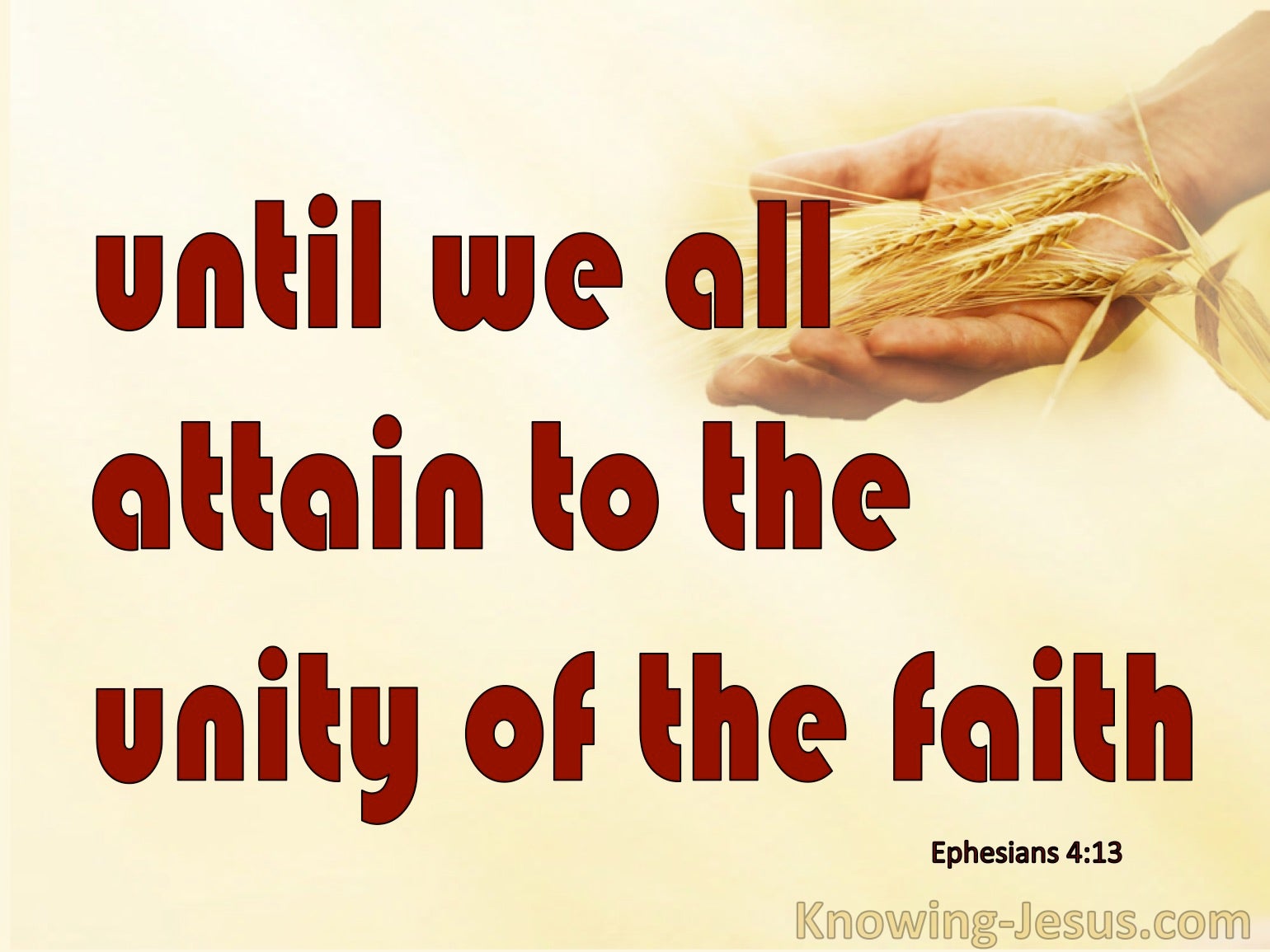 The Light Through The Cross

The city has no need of sun or moon, for the glory of God illuminates the city, and the Lamb is its light. (Revelation 21:23 NLT)

Light is not a mental thing: that is to say, it is not just a matter of having a store of mental knowledge. That is not light. It is possible to have an enormous amount of doctrine and truth and never be luminaries, that is, never register impact upon darkness. Real light is experimental: that is to say, it is the fruit of experience, the experience of suffering. How have you children of God come to know what you do know of the Lord, that real kind of knowledge of the Lord which is so precious to us, which means so much and which makes you in that measure of value to others? It is through suffering, it is through the difficult way the Lord has led you, it is through the work of the Cross that He has wrought in you. he Lamb is the lampsuffering leading to knowledge, to light, to understanding. It is the only way. These people at the end will be in the good of a great and wonderful revelation which has come by their fellowship with Christ in His sufferings. It is very true. It may not be too comforting from one standpoint, but it is true; and it ought to help us to realize this: that the Lord, in the way in which He is dealing with us, in the sufferings which He allows to come upon us, is really seeking our education, that we may have a knowledge of Himself which can only come that way, and which is a peculiar kind of knowledge of tremendous value to us and through us to others. We do not learn in any other way. It is the Lamb, always the Lamb-principle, the way of suffering and sacrifice and self-emptying, that brings us into the knowledge of the Lord. he Lamb is the lamp thereof and, just as it is deeper death unto fuller life, so it may often be deeper darkness unto fuller light.

The Lord seems to lead us in a way where we are less and less able naturally to understand Him. He gets us altogether out of our natural capacity, beyond our capacity for interpreting His ways. We just do not know what the Lord is doing, or why He is doing what He is doing; yet it is the way by which we come to a very real kind of inward knowledge of Himself. It may not be capable of explanation in words to anybody, but we know, somehow or other we know, and that is a mighty thing, a mighty power of knowledge. It is light through the Cross.

Our God did not forsake us.

Beloved, do not think it strange concerning the fiery trial which is to try you, as though some strange thing happened to you. § If you endure chastening, God deals with you as with sons; for what son is there whom a father does not chasten? But if you are without chastening, of which all have become partakers, then you are illegitimate and not sons.

The Lord will not forsake His people, for His great name’s sake, because it has pleased the Lord to make you His people. § Can a woman forget her nursing child, and not have compassion on the son of her womb? Surely they may forget, yet I will not forget you. § Happy is he who has the God of Jacob for his help, whose hope is in the Lord his God.

Shall God not avenge His own elect who cry out day and night to Him, though He bears long with them? I tell you that He will avenge them speedily.

He who overcomes shall inherit all things.

If in this life only we have hope in Christ, we are of all men the most pitiable. § Now they desire a better, that is, a heavenly country. Therefore God is not ashamed to be called their God, for He has prepared a city for them. § An inheritance incorruptible and undefiled and that does not fade away, reserved in heaven for you.

All things are yours: whether … the world or life or death, or things present or things to come—all are yours. § “Eye has not seen, nor ear heard, nor have entered into the heart of man the things which God has prepared for those who love Him.” But God has revealed them to us through His Spirit.

Look to yourselves, that we do not lose those things we worked for, but that we may receive a full reward. § Let us lay aside every weight, and the sin which so easily ensnares us, and let us run with endurance the race that is set before us.

(God) hath raised us up together, and made us sit together in heavenly places in Christ Jesus" (Eph. 2:6)

We are to settle down to live and grow precisely where we have been re-born: in Christ Jesus above.

"Do we not often harbor the thought that something yet remains to be done - either by ourselves or by Him - in order to our drawing near? Do we not often thus become occupied with the circumstantials of worship rather than with the Lord Jesus - the substance? Are we not often false to Him in questioning our title to draw near, because we find distance in our own hearts, as if it was the warmth of our affections, instead of the Blood of the Lord Jesus, which brought us nigh?" -W.K.

"Our being perfectly cleansed by the Blood of the Lord Jesus, the Holiest of All is our place before the Father, and it is so simply upon the ground of what His sacrifice has effected. Our dwelling place is in the light, not by reason of our subjective condition, but because the Lord Jesus has made the position ours by the putting away of our sins, and by bringing us to the Father." -H.F.W.

"The heart must enter into something more than the look behind into those waters of judgment, out of which the Lord Jesus rose, having left our sins, and death, and judgment forever! Such a joy would never carry us through the desert where faith and patience are tried and tested every day. It needs that the heart be carried into the glory of Canaan beyond; in the present sense of peace with the Father, and the consciousness of standing in His present favor - the favor that is better than life." -F.G.P.

"Having therefore, brethren, boldness to enter into the Holiest by the Blood of Jesus, by a new and living way, which He hath consecrated for us, through the veil" (Heb. 10:19, 20).

God chose to make known how great among the Gentiles are the riches of the glory of this mystery, which is Christ in you, the hope of glory.
Colossians 1:27

The truths that Nicodemus learnt on his night visit to Jesus Christ were staggering. During an evening conversation his long-held religious values had been fragmented. The requirements of the Mosaic Law were impossible – unattainable to mortal man! The notion of a new birth with a new life – was beyond the concept of human reason!

The idea of flesh born of flesh and spirit born of God’s Spirit was inconceivable! The old law of death was having to be set aside and replaced with the new law of life God’s perfect Law was to be superseded by His perfect grace – which came by Christ.

The eyes of this great teacher of Israel had been veiled by the iron curtain of sin and the traditions of men – and so God had sent His only begotten Son to fulfil the perfect requirements of the Law, so that He could be the one, perfect human Sacrifice – so that He could pay the price for the accumulated sin of the race of humanity.

Satan is a defeated enemy. Satan is a conquered foe. Satan is a crushed antagonist. Satan is a subdued fiend. His final downfall is prerecorded but his present activity is viciously cruel. The god of this world system has one main objective – one goal – one aim. It is to prevent the Lord Christ Jesus, the anointed of God, to return as King of kings. The prince of the power of the air and the forces of evil seek to prevent Christ’s return.

The principalities and powers of the devil attempt to do this by deceit and thievery. This great adversary of God is in a bloody battle – to scupper the hope of the glorious gospel of Christ’s glorious return. His main focus is to rob the spiritual believer of his or her true fighting power, He is not bothered by the strength of Christian ‘talking’ or Christian ‘working’.

He’s not phased by Christian ‘advertising’, Christian ‘programs’, Christian ‘service’. He is not troubled by ‘lets-go-to-the-meeting’ power’ or ‘listen-to-the-teaching’ might! But he shudders at the genuine; fighting; Spirit-led ‘power-of-prayer’ strength. He is deeply impacted by the warrior that will resist and stand firm in the Spirit.

And he trembles at the power of the victory of the Christ of Calvary, on His Cross. This is the area of spiritual work most feared by the principalities and power of evil. This is what the world’s dark rulers and wicked spirits in the heavenlies dread most.

Down through the centuries evil’s plan has been to subdue true Christian witness, but it welcomes vain religiosity and pats the toothless jaws of a worldly Church. Superficial spirituality in unspiritual believers contributes to his nefarious plans. The fluff of most religious work and worship is ineffective against his grand designs.

So many seek to do the work of God through natural forces and carnal power. Mind, intellect, and reasoning power or the force of personality, acumen, or training.. but influence, personality, constitution, diplomas are of no consequence, and Satan happily allows many