"I have heard the taunting of Moab And the revilings of the sons of Ammon, With which they have taunted My people And become arrogant against their territory. 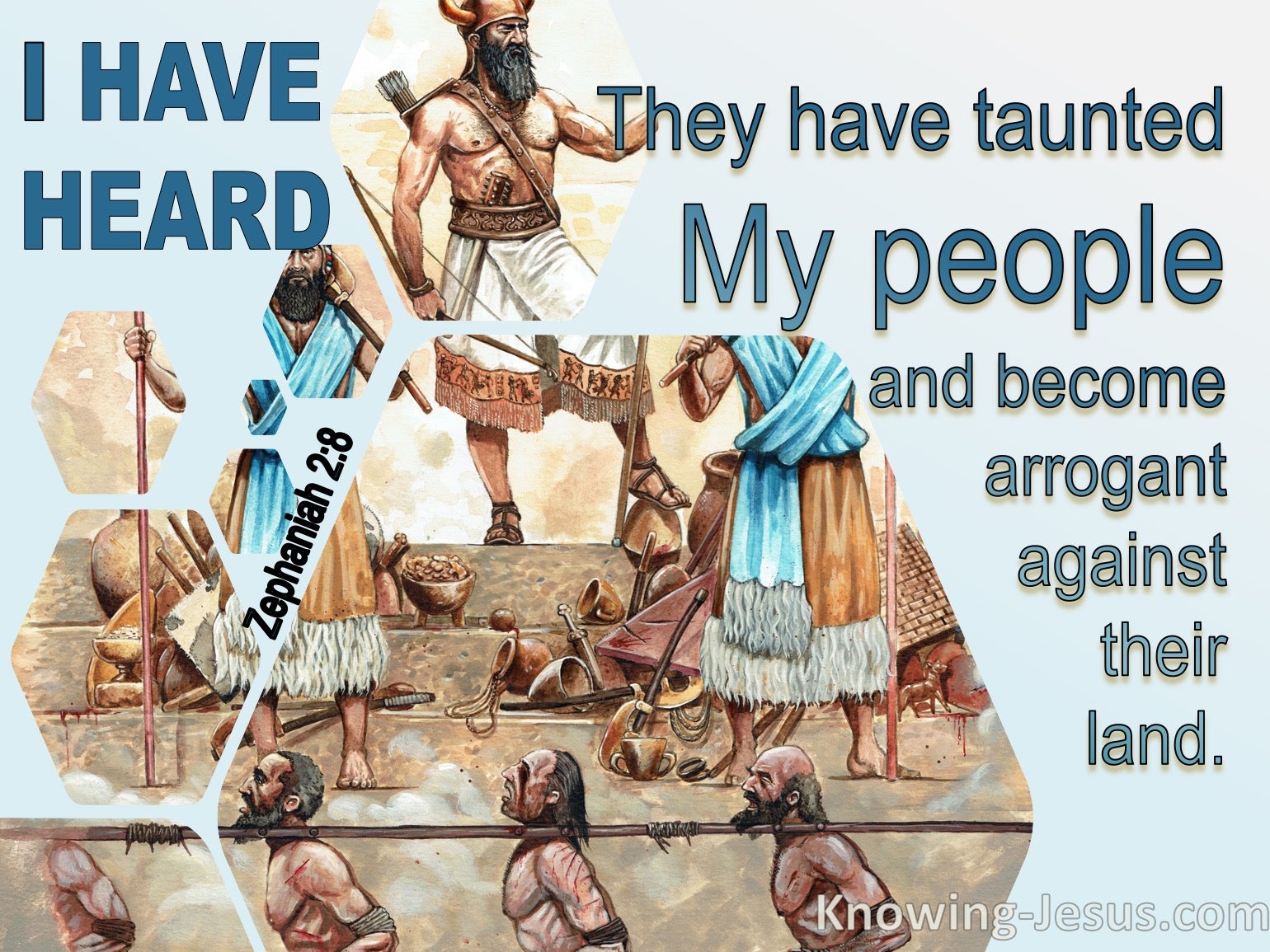 Look! I see the heavens opened and the Son of Man standing at the right hand of God! (Acts 7:56 ISV)

One, perhaps supreme, factor in the significance of Stephen was what he saw at the end and said with almost his last breath: "Behold, I see the heavens opened; and the Son of man standing on the right hand of God" (Acts 7:56). Here we have the central and basic reality of true New Testament Christianity, of the Church and the churches – Jesus on the right hand of God. The government, the authority, the headquarters, vested in the ascended Lord, and centered in heaven; not in Jerusalem, nor anywhere else on earth.... The Jewish rulers and Stephen's accusers were quick and shrewd enough to recognize the implications, for they had no less and no other import than that the "Temple made with hands" was finished; the dispensation of the Law was ended. There was an implicit call to the Church of Jesus to leave the Temple and all that went with it and to move into the greater, the fuller, and the abiding reality.

The tragedy is that, with [the book of] "Hebrews" in their hands, responsible leaders of the Church can still adhere to a system and form which is but the extension or carry-over of the Old Testament, with certain changes of phraseology. The immensity of the change and gap has certainly not been apprehended. Some of the most terrible things in the whole Bible are contained in that letter in relation to the crisis and the two ways and realms. The issue is no less than that of Life and death. All this has much to say regarding the true nature of the Church and the churches. He that hath eyes to see, let him see!

It is good for me to draw near to God.

Lord, I have loved the habitation of Your house, and the place where Your glory dwells. § A day in Your courts is better than a thousand. I would rather be a doorkeeper in the house of my God than dwell in the tents of wickedness. § Blessed is the man whom You choose, and cause to approach You, that he may dwell in Your courts. We shall be satisfied with the goodness of Your house, of Your holy temple.

Therefore, brethren, having boldness to enter the Holiest by the blood of Jesus, by a new and living way which He consecrated for us … let us draw near with a true heart in full assurance of faith, having our hearts sprinkled from an evil conscience.

You know the grace of our Lord Jesus Christ.

The Word became flesh and dwelt among us, and we beheld His glory, the glory as of the only begotten of the Father, full of grace and truth. § You are fairer than the sons of men; grace is poured upon Your lips. § All bore witness to Him, and marveled at the gracious words which proceeded out of His mouth.

You have tasted that the Lord is gracious. § He who believes in the Son of God has the witness in himself. § We speak what We know and testify what We have seen.

Oh, taste and see that the Lord is good; blessed is the man who trusts in Him! § I sat down in his shade with great delight, and his fruit was sweet to my taste.

He said to me, “My grace is sufficient for you, for My strength is made perfect in weakness.” § To each one of us grace was given according to the measure of Christ’s gift. § As each one has received a gift, minister it to one another, as good stewards of the manifold grace of God.

He (the Spirit) maketh intercession for the saints according to the will of God" (Rom. 8:27).

Neither the Lord Jesus nor the Holy Spirit ever thought of willing or praying outside the will of God the Father. Neither will we, while we walk in the Spirit, and abide in the Lord Jesus.

"Faith is not a power that one possesses, by which he can move the arm of God and work miracles. Faith accepts quiet guidance; only unbelief demands a miracle.' There is nothing in true faith that the flesh can glory in. The power is God's. It is the Father who works and does it according to His own wisdom and will. Faith is simply absolute confidence in the Father which gives the certainty that He will fulfill His Word." -A.H.

"Faith must be based upon certainty. There must be the definite knowledge of and confidence in the Father's purpose and will. Without that there can be no true faith. For faith is not a force that we can exercise or a striving to believe that something shall be, thinking that if we believe hard enough it will come to pass." -A.H.

"Let us not be discouraged if the transformation we long for does not take place immediately. Let us feel the need and lay it to heart. Let us stand in faith, and we shall never be put to shame. Cleaving to the Lord Jesus and His Word with purpose of heart can never be in vain. The hour will surely come when out of our hearts, too, will flow rivers of living water."

"Whatever sends us to the Lord Jesus - be it grief, disappointment or burden - is to that degree a blessing. No price is too great to pay in gaining this fellowship with the Lord Jesus Christ."

"That ye might be filled with the knowledge of His will in all wisdom and spiritual understanding" (Col. 1:9).

The "Go" Of Preparation

“Therefore if thou bring thy gift to the altar, and there thou rememberest that thy brother hath ought against thee; leave there thy gift before the altar, and go thy way; first be reconciled to thy brother, and then come and offer thy gift.” Matthew 5:23,24

It is easy to imagine that we will get to a place where we are complete and ready, but preparation is not suddenly accomplished, it is a process steadily maintained. It is dangerous to get into a settled state of experience. It is preparation and preparation.

The sense of sacrifice appeals readily to a young Christian. Humanly speaking, the one thing that attracts to Jesus Christ is our sense of the heroic, and the scrutiny of Our Lord's words suddenly brings this tide of enthusiasm to the test. "First be reconciled to thy brother." The "go" of preparation is to let the word of God scrutinize. The sense of heroic sacrifice is not good enough. The thing the Holy Spirit is detecting in you is the disposition that will never work in His service. No one but God can detect that disposition in you. Have you anything to hide from God? If you have, then let God search you with His light. If there is sin, confess it, not admit it. Are you willing to obey your Lord and Master whatever the humiliation to your right to yourself may be?

Never discard a conviction. If it is important enough for the Spirit of God to have brought it to your mind, it is that thing He is detecting. You were looking for a great thing to give up. God is telling you of some tiny thing; but at the back of it there lies the central citadel of obstinacy: I will not give up my right to myself - the thing God intends you to give up if ever you are going to be a disciple of Jesus Christ.

The law was our guardian or schoolmaster until Christ came. It protected us until we could be made right with God through faith. `
Galatians 3:24

The perfect Law became our tutor to lead us to Christ, so we may be justified by faith. It was Nicodemus, a Pharisee and a leader of the Jews who came to Jesus by night. Like all religious leaders he was a man who was separated unto legal righteousness. He knew every nuance of the Law and at this time he was the main teacher in Israel.

No doubt he studied the Scriptures diligently thinking that in so doing he would earn eternal life and yet these very writings testified of Jesus in Whom abides eternal life. Doubtless he was a good man, a sincere man.. a man highly honoured among his peers, but Nicodemus was a only a man! – a man who was a sinner, a man incapable of keeping God’s Law – and therefore Nicodemus was a man who needed a saviour.

However righteous Nicodemus was in his own eyes or the eyes of his fellow Israelites, he fell short of God’s glory.. and even his righteousness was as filthy rags to the Lord, This great teacher of Israel was as guilty of breaking God’s Law, as everyone else. Had his need of forgiveness been revealed to him? Had he been present on the banks of the Jordan as John the Baptist screamed his condemnation of the proud Pharisees? Did he recognise that he too was a part of that brood of vipers, of whom John spoke?

Rabbi, we know that You have come from God as a teacher, for no one could perform the signs You do unless God was with him, were his opening words, that blessed night. Nicodemus was one of whom Paul spoke when he said that before faith came, we were kept in custody under the law – shut up to the faith which was later to be revealed, But he was a man,

What an astonishing few years the twelve disciples had as they walked with Christ. Twelve men, chosen of God to walk the path to the cross – with God incarnate. God Who at sundry times and in diverse manners spoke through the prophets. For three and a half years spoke through His own human voice – God spoke through the Man Christ Jesus.

God in His justice cannot look upon sin – for the wages of sin is death. God in His love discovered a way to have those sins forgiven, forever. God is His wisdom sent His only begotten Son that we could have life – His Life.

God – the invisible God, can not look upon sin and hid His pure face from sinful man. God in the His mercy, sought to manifest Himself fully in the last days, through Christ, God in His grace towards us opened our understanding of Himself, through Jesus. All the fullness of the knowledge of God is only and exclusively – through Christ, All the secret things of God – the mystery of Godliness was summed up in Him, And in the fullness of time God sent His Son, born of a woman to walk this earth.

All God ‘s works were performed through the Word – the Word Who became flesh. All God’s blessings and healings – flow through faith in the Man, Christ Jesus, for in Him all things were made and by Him all things hold together. All the blessings of God are poured through the cleansing blood of the Saviour.. so that in the dispensation of the fullness of the times He might gather together in one all things in Christ, both which are in heaven and on earth—in Him.” Ephesians 1:10