and wherever the sons of men dwell, or the beasts of the field, or the birds of the sky, He has given them into your hand and has caused you to rule over them all. You are the head of gold. 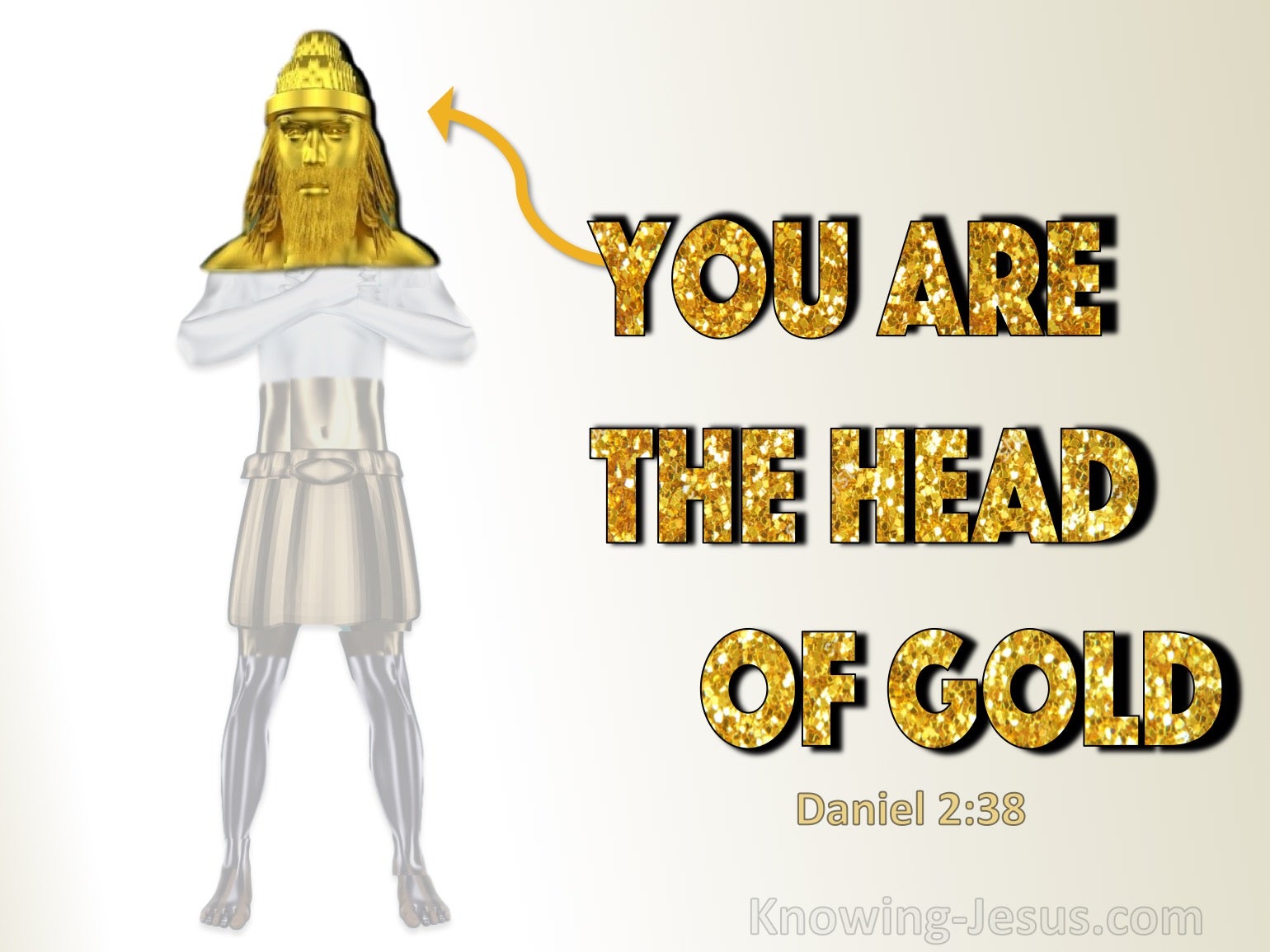 The Key to Faith

Seek first His kingdom and His righteousness, and all these things will be given to you as well. Matthew 6:33

And that putting first often meant a letting go of everything personal.... What is disappointment to us? Can we always say that disappointment which we think is disappointment with the Lord and over His things is because we did so much want the Lord to have what He wanted irrespective of our interests at all; we were prepared to let everything go, WE were not mixed up in this thing somehow? In the Lord getting what He wants, we see ourselves figuring in some way. It has to be a very sharp instrument that gets in between those two things and defines them because they are so mixed up. Is it not true that faith wavers, weakens and ofttimes goes right down and under when in the way of the Lord's interests ourselves are entirely shut out?

What is the key to faith then? The key to faith is this dividing of soul and spirit, or, in other words, it is the complete abnegation of self-interests – not in the Buddhist sense of annihilation, but in the sense of God's interests becoming positive and predominant. That is where the battle of faith rages; it rages upon that ground always. If we were so utterly – and not one of us really is – if we were so utterly consumed for the Lord's interests alone that no other interest in our lives had any precedence or power to govern us, we would be in victory all the time. It is this completely disinterested concern for what the Lord wants that is the key to faith. If Israel in the wilderness had taken this attitude – "Well, this is a very difficult experience, but the Lord is after something, the Lord wants something, and He evidently knows that that is the best way to get it; all right, I am with Him, I may lose everything, I may suffer the loss of all things, but it is what the Lord wants that matters. The Lord wants us in that land; well, if it means everything, to be there for the Lord's pleasure, that is the thing that matters." If that had been their attitude, do you think they would have journeyed forty years in the wilderness round and round, do you think at the border of the land they would have been turned back to perish in the wilderness? You can see in the consummation that next generation which did go in, went in on this matter of faith only. The whole story is based upon faith.

A God of truth and without injustice; righteous and upright is He.

Him who judges righteously. § We must all appear before the judgment seat of Christ, that each one may receive the things done in the body, according to what he has done, whether good or bad. § Each of us shall give account of himself to God. § The soul who sins shall die.

“Awake, O sword, against My Shepherd, against the Man who is My Companion,” says the Lord of hosts. “Strike the Shepherd.” § The Lord has laid on Him the iniquity of us all. § Mercy and truth have met together; righteousness and peace have kissed. § Mercy triumphs over judgment. § The wages of sin is death, but the gift of God is eternal life in Christ Jesus our Lord.

A just God and a Savior; there is none besides Me. § Just and the justifier of the one who has faith in Jesus. Justified freely by His grace through the redemption that is in Christ Jesus.

Death is swallowed up in victory.

Thanks be to God, who gives us the victory through our Lord Jesus Christ.

Inasmuch … as the children have partaken of flesh and blood, He Himself likewise shared in the same, that through death He might destroy him who had the power of death, that is, the devil, and release those who through fear of death were all their lifetime subject to bondage.

If we died with Christ, we believe that we shall also live with Him, knowing that Christ, having been raised from the dead, dies no more. Death no longer has dominion over Him. For the death that He died, He died to sin once for all; but the life that He lives, He lives to God. Likewise you also, reckon yourselves to be dead indeed to sin, but alive to God in Christ Jesus our Lord.

In all these things we are more than conquerors through Him who loved us.

Concerning the Holy Spirit, hidden as He is, faith is required above all else.

"Certainly the Holy Spirit directs in the countless details of daily life. Those who have faith, and are dependent upon His direction, will not be disappointed. But the Spirit leads according to Scriptural directions; hence that which is called the leading of the Spirit, and which has not the truth of the Word for its line of thought and action, is necessarily false." -H.F.W.

"The principle of walking in dependence upon the Holy Spirit must never be abandoned, however we may fail to carry it out. We must steer by divinely given principles, even if winds and waves at times do throw us off course. To give up the Father's principles because of opposing elements is to court shipwreck." -H.F.W.

"The Lord Jesus in glory is the standard of perfection, and the Saviour on earth is the pattern for our walk. No one's walk is perfect, but the Spirit of Christ who dwells in us is perfect, and as the believer yields to the Father as one alive from the dead, the desires of the flesh are not fulfilled, and the Spirit brings forth His fruit in him." -H.F.W.

“If . . thou rememberest that thy brother hath ought against thee… .” Matthew 5:23

If when you come to the altar, there you remember that your brother has anything against you, not - If you rake up something by a morbid sensitiveness, but - "If thou rememberest," that is, if it is brought to your conscious mind by the Spirit of God: "first be reconciled to thy brother, and then come and offer thy gift." Never object to the intense sensitiveness of the Spirit of God in you when He is educating you down to the scruple.

"First be reconciled to thy brother . . ." Our Lord's direction is simple, "first be reconciled." Go back the way you came, go the way indicated to you by the conviction given at the altar; have an, attitude of mind and a temper of soul to the one who has something against you that makes reconciliation as natural as breathing. Jesus does not mention the other person, He says - you go. There is no question of your rights. The stamp of the saint is that he can waive his own rights and obey the Lord Jesus.

"And then come and offer thy gift." The process is clearly marked. First, the heroic spirit of self-sacrifice, then the sudden checking by the sensitiveness of the Holy Spirit, and the stoppage at the point of conviction, then the way of obedience to the word of God, constructing an unblameable attitude of mind and temper to the one with whom you have been in the wrong; then the glad, simple, unhindered offering of your gift to God.

For it is by grace you have been saved, through faith– and this is not from yourselves, it is the gift of God.
Ephesians 2:8

The two books of the Bible considered as the clearest and best explanation on how to be saved, are to be found in the gospel of John – and in Paul’s epistle the Romans. Both men, in their own unique writing style and language, explain that God’s gift of saving grace for all men, is simply by believing on the name of the Lord Jesus Christ. John says that grace came through Christ and whoever believes on Him will be saved. Paul reminds us that salvation comes through faith alone – that it might be of grace. But one issue confuses and confounds many people – the issue of repentance.

Some consider that unless a sinner believes in the Lord Jesus Christ, and in addition, goes through the process of repenting of all their sins – they are not properly saved. Many believers are told by certain teachers and preachers that unless they repent of every sin they have ever committed – then they cannot be properly forgiven by God. But this goes against the teachings of both John – the beloved disciple of the Lord and the apostle Paul, who was called as God’s special witness to the gentile nations.

John wrote his gospel so that we might believe that Jesus is the Christ, the Son of God – and that by believing we might have life, but he NEVER uses the word ‘repentance’. Paul in his letter to the Romans gives step-by-step instructions on how we are justified, sanctified and glorified by grace, through faith – but only uses the word ‘repentance’ a couple of times.. and never ever in the context of salvation or ‘being saved’.

Is it possible that these two giants of the faith, who were moved by the Spirit to write Scripture, could have misunderstood salvation, or is there another explanation? As all scripture is God-breathed, it is impossible for John

SAUL of Tarsus – what a guy! He would describe himself a ‘Master of Israel’, Saul of Tarsus – one well-learned in the Torah, the Scripture, the Oracles of God: Circumcised the eighth day – of the stock of Israel – of the tribe of Benjamin. Concerning the righteousness which the Law of Moses demanded, blameless. A Hebrew of the Hebrews. Concerning the Law, a Pharisee. Wow.. what a GUY!!! Oh what tremendous strength of character, what wonderful self-assurance. What magnetism was in Paul. This was a ‘must-be-seen-with’ type o’ guy. What self-confidence – what self-sufficiency – what self-reliance – what a MAN!!! This was a man after mens’ own heart !

But Saul of Tarsus met Jesus and had to be taught some of life’s toughest lessons. He learned that his own wisdom; knowledge; charisma and ability counted as nothing. He learned about faith: that your faith should not stand in the wisdom of men, but in the power of God. 1Cor.2:5. Paul came to the point of absolute surrender, full submission – a totally broken man.

Paul realised he was utterly blind; utterly ignorant; utterly helpless; utterly pathetic. Paul discovered his great learning and stunning personality had its roots in evil self,  and that he, of all men needed God’s tremendous, wonderful amazing grace.

Paul was led of the Spirit to realise that he needed to be brought very low. He was led to understand that he had to be brought to the place of death to self. He had to come to grasp what God’s actual plan and dear desire for him was – now that is grace… God’s tremendous; wonderful; amazing grace.

It was not when that dazzling light, blinded his eye on the road to Damascus, but through years of isolation and a life-journey of trial – he came to understand. Through Paul’s wilderness walk – he received an ever-growing conception of Christ. Through Paul’s rich, full, unusual, astonishing life – his vision of his Lord grew.